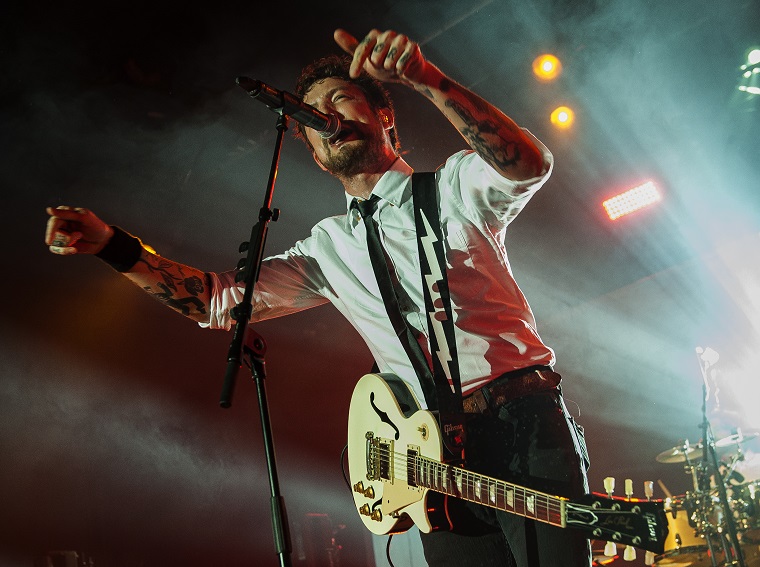 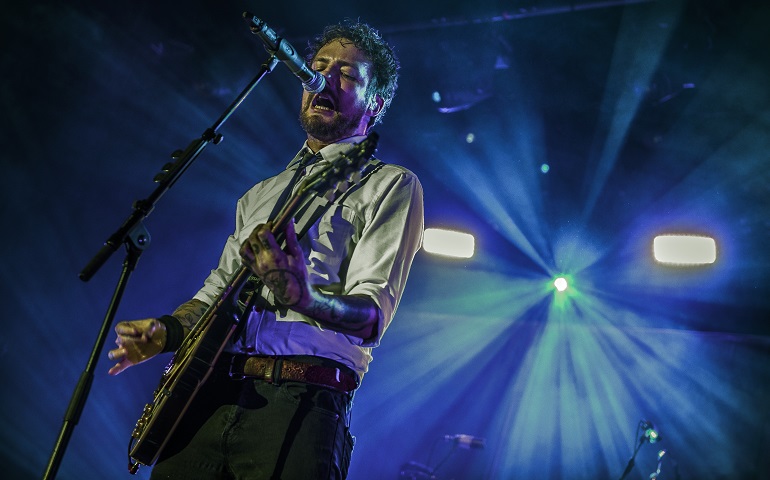 On the eve of the release of his optimistically titled Be More Kind album, Frank Turner and his band of gig fit Sleeping Souls open the UK tour to a sold out and typically rabid Manchester crowd.

He might be asking “are you afraid of the darkness?” on his website, plausible enough if you’re still having dreams of pioneers, pirate ships and Bob Dylan, yet Frank Turner seems, on record at least, to be a much more contented soul these days.

However, onstage, Turner and his band provide charged and on fire as standard. The first UK show on the tour – the tag is ‘always on tour’- and it appears to be the same as it ever was. The two thousand and something-th show on what was a phrase popularised by Dylan fans, the never ending tour and Frank’s still playing the troubadour who switches from full on (but not quite Mongol Horde hardcore full on) electric punk and roll, to acoustic guitar wielding folk singer. Decked out in his usual uniform of white shirt and skinny black tie, a sweat is worked up in the first ten minutes of adrenaline fuelled release. It’s a case of eyes in the back of the head awareness if you’re sharing a stage with Frank to avoid a collision with the livewire Souls. 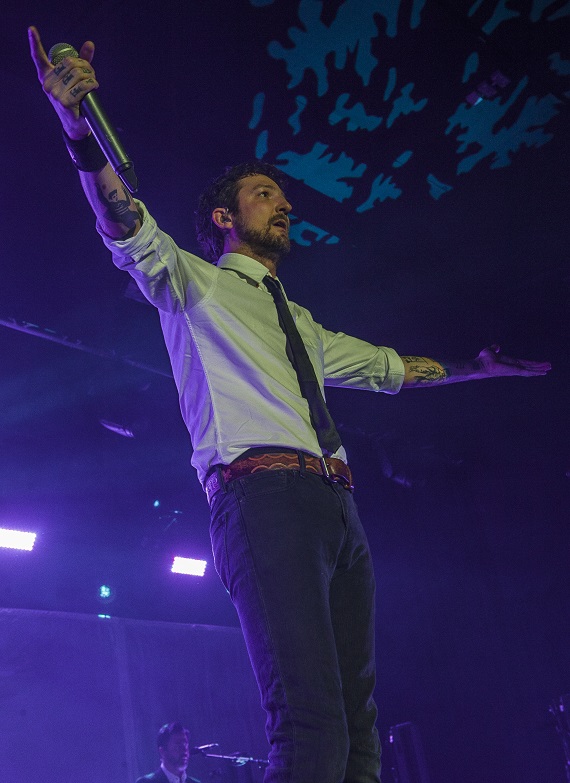 Playing a set with a handful of new songs from the as yet unreleased album was always going to be a tester. Setting the ball rolling by riding the tide of euphoria that greeted his return with two reasonably familiar new ones in at the start was a crafty move.

The low key electro funk of Blackout (you can even get a guitar tutorial on YouTube) and the 1933 single took ‘new song’ precedency before the more familiar and crowd pleasing Get Better and Recovery, the latter having him declaring that somewhere along the line he may have pissed off God

An FT gig feels like a coming together for those redemption and cleansing of the soul – a feeling of liberation for having bellowed away with unselfconscious abandon and spent an excess of energy while taking a leaf out of the Pete Townsend/punk songbook, the old “hope I die before I get old” refrain, albeit with an acoustic guitar for Live Fast Die Young before going all topical with some sharp observation on Make America Great Again. The mid paced but intense burn of There She Is is another of the new batch peppering the set of the familiar goods along with a couple of nods to the Songbook album in the revamped versions of Glorious You and Polaroid Picture.

And yes there are those moments which rank as anthems – Reasons Not To Be An Idiot, Photosynthesis and I Still Believe – al belted back at him at full volume. Conducting the masses from a couple of platforms at the lip of the stage, it’s a bizarre competition between performer and crowd to see who can be loudest and the sweatiest. Living fast yeah, but fingers crossed, not dying young.

All words and live photography by Mike Ainscoe. You can find more of Mike’s writing on Louder Than War at his author’s archive and his website is www.michaelainscoephotography.co.uk