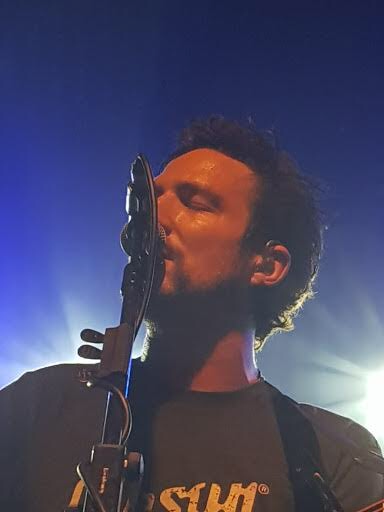 The omnipresent Frank Turner is everywhere we go.
The charismatic, the one man and his guitar, big hearted troubadour turned up in Manchester to headline a special benefit concert for Manchester’s homeless and turned in one of those special nights that he is endlessly capable of. Wayne Carey was there to soak in the west and the vibes and celebrate the Frank.

The last time I saw Frank Turner live was at The Apollo in 2011 with his band The Sleeping Souls, so tonight was going to be special being a smaller venue and with its fund raising aspect, for all the right reasons.

Manchester has seen a massive rise in homeless people over the years and something needs to be done. Andy Burnham, our Mayor, is on board as is the wonderful Frank Turner who is a staunch supporter of The Big Issue and has come here tonight to raise some money for their cause.

The venue is bursting at the seams for this sold out gig and the mood is great. I turn up to catch the support band Felix Hagan & The Family who get the audience going with their punk twist of Rocky Horror Show theatrics melded with The B52’s, Boots Electric, a bit of Riot Grrll and lots of hints of LCD Soundsystem. They are funky, catchy and infectious. Certainly a band to keep an eye on.

Frank comes on armed with just his guitar and no backing band and he proves he can pull it off alone. He does a sprawling set of 21 songs and the audience know every one of them.

He only does four numbers from his last album including the brilliant Get Better and The Next Storm. He eggs on the crowd with his between song banter and gets everyone singing along to some of his punk folk classics including Peggy Sang The Blues and the brilliant I Still Believe.

His energy is amazing for a guy who has been constantly touring forever and you know he enjoys every minute of it. There is no treading the boards feeling going on here and you can see he genuinely loves what he is doing.

He goes off to a mass roar of approval then comes back on with FH & The Family to a great cover of Queen – Don’t Stop Me Now and Basket Case by Green Day which tops the night. He ends the set with the top Four Simple Words and stagedives into the crowd and is pulled along from front to back with a big grin on his face!

An excellent night and all for a good cause. More musicians need to get on board as the punters will gladly turn up for nights like this knowing their readies are going somewhere useful. Cheers Frank!