Home Blogs An Interview with Frank Turner (in Barnsley!!) 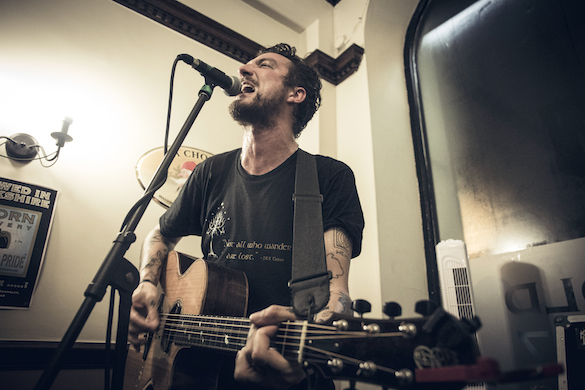 We caught up with Frank Turner for a chat before his gig at The Old No.7 in Barnsley a couple of weeks ago (Louder Than War review) where he was supported by Joe McCorriston.

Frank and I had been watching Joe McCorriston‘s set, bit we rushed downstairs as soon as it finished for our interview. Frank is buzzing after watching his mate Joe play to the crowd.

Louder Than War:  What brings you to Barnsley today?

Frank Turner: My mate Ian, he works for Kerrang, lives in London but is from Barnsley originally. We got pissed the other day and he went on this massive rant “all you fucking hard touring bands like you and Biffy, none of you would ever play Barnsley” and I got drunk and thought valid point. I said, “Fuck you, I’ll play Barnsley. “We woke up the next and before I had the chance to have my fry up, he’d already started booking this gig. He said, “You can’t back out now. Your playing.”

I’d have never have backed out anyway. I’m man of my word. I’ve never played here. It seems like a cool place. We’ve turned it into a benefit show too.

Tell me a little about the charity. It’s a local one. Was that Ian’s choice?

It’s the Yorkshire Miner’s Welfare Trust Fund. I told Ian, if I’m doing pop up shows like this, I’d prefer for them to be charity gigs. I make plenty enough money from the regular tours that I do to live off, so if I can do something like this and contribute in some way then all’s good. My charity of choice for the last few years has been Shelter, but I asked Ian if there was anything local that would make more sense. I thought it sounded great.

You often play with a band but you also do solo shows too. What do you prefer about each kind of show?

Well, I feel like the full band shows that I do are more artistically realised. They’re what the end product of what I produce on record sounds like. But what I like about the small solo shows are that they are more raw and exploratory. I mean, I don’t have a setlist for tonight. I’ll just play what I feel like. Because it’s a noisy small pub in Barnsley full of a Yorkshire crowd eager for it – I mean that as compliment – I’m not going to play a load of weird experimental b-sides and new stuff.

How often do you get to play venues of this size?

Recently, not that often but if I was to show you a pie chart of all of the venues I’ve played, I’ve played more venues this size than I have the likes of The O2, I tell you that.

What’s been your favourite intimate gigs you’ve been to?

I don’t want this to sound like I’m trying to prove my punk credentials or some bullshit, but I genuinely grow up seeing gigs like this. I never went to arena shows. I think the Astoria in London, which was 2000 cap, was probably the biggest.

Your music straddles a number of different genres. You have a lot of folk fans picking you up now and you’ve had a lot of punk fans with you for a long time now. I just wondered, what are the punk/hardcore and folk albums that got you into each of thoe musical genres?

Excellent question. Can we throw Country into the mix too because I genuinely consider myself as much of a country singer as I do everything else.

I grew up with punk rock. The first Clash album was a big one for me, NOFX generally, The Descendants’ Everything Sucks, Black Flag’s first three years, sorry… first four years. Ha! Confusing them with my own records as I ripped them off so much.

Anyway, folk music initially for me was Bruce Springsteen’s Nebraska, Johnny Cash’s American Recordings Series and I’d like to say a lot of Martin Carthy. Also Jon Boden and Bellowhead have been a big influence on me.

Specifically the English side of folk music. You know, you can buy a Townes van Zandt album, who I fucking love and I love Americana too, but you can’t beat a bit of Martin and Eliza Carthy.

Why do you think country music has never really been big over here?

Wow. We’re getting deep now. The obvious answer is that a lot of people think that it is essentially an American form of music, but so are a lot of other forms of music that have got big over here. The great thing about country is they say it’s the white man’s blues. You know what I mean? Yes … there are other forms of traditional music over hear that fills the same sociological space but I just adore country music. The plaintive melody, the simple riff and the lyrics of heartbreak and failure. What the hell else does anybody want from music?

Joe just played a cover of Basket Case. Roseanna was saying that it was the first song she ever learned to play on the guitar. What was yours?

This is embarrassing. The song I ever learned to play was Knocking On Heaven’s Door. But of course, at the time I thought it was by Guns n Roses, rather than Bob Dylan because I was ten.

I think Guns n Roses and their first couple of albums were probably the first records for many people of a specific age.

Definitely, but these days my hatred for Guns n Roses is concentrated. They are literally my least favourite band. Dylan on the other hand I’m a big fan of. To me, Guns n Roses epitomises everything I hate about the music industry. That lazy cultural arrogance and that disrespect for the audience. It’s like, why would I buy your records when you obviously don’t like me and think I’m a cunt?

You got one job. In twenty four hours, you’ve got two hours to work. Just be on time. I’ve spent a lot of time pursuing what I call my job. Some of it is a job – the tedious things, like travelling, accounts, logistics, tax; but I never want to disrespect what I do for a living, which is something that I enjoy, because not a lot of people a lucky enough to be able to do that.

BB King said I play for free and I get paid for the rest of the bullshit. I think that’s about right.

Would you like a quick plug before you go upstairs to play?

Have you got a new record coming out?

I’m making a new record in October. It’ll be out next year. But I’ve got record labels that can tell you about that. Joe is starting out, so listen to him.

Joe McCorriston rushes downstairs, sweat dripping. I manage to catch a minute with him.

Louder Than War: How was playing Barnsley?

Joe McCorriston: Playing Barnsley was brilliant. I’ve never been here before and it was a pretty bad ass gig to have. It was awesome.

How would you describe your music to anybody that hasn’t heard of your before?

I don’t really say it’s a specific genre, but if I had to, pop music influenced by punk and folk.

How do you know Frank and how did you get this gig?

To be honest, I’m 20 and I’ve been playing four years now and I’ve been badgering him for that long to let me support him. About a year ago, I was on tour and I was waking up in a London guest house in Tottenham and I checked my phone and I got email from Frank asking if I wanted to support him at this show in Barnsley. Too right! I thought it was one of those email updates for fans about tours at first. Amazing.

Reckon you’d come back to Barnsley?

Of course I’d love to. This has been one of the best nights of my life.

You told the crowd upstairs that you’re from Morecambe. What’s it like for a music scene?

If that like asking about Barnsley and me telling you to go to Sheffield? Is it that bad?

There is no music in Morecambe. There are just pubs with karaoke singers. Lancaster is really close and it has a great scene. You’ve got The Bobbin, The John O’Gaunt, Yorkshire House, The Robert Gillow. I know none of these names mean anything to you but if you want to go to Lancaster, check out anyone of those venues. Our music scene’s great there.

Joe McCorriston is on Facebook and BandCamp and tweets as @joemccorriston

All words by Jason White, photo by Roseanna Hanson. More by Jason can be found on these links: alternativebarnsley.com, Facebook and Twitter: @altbarnsley.