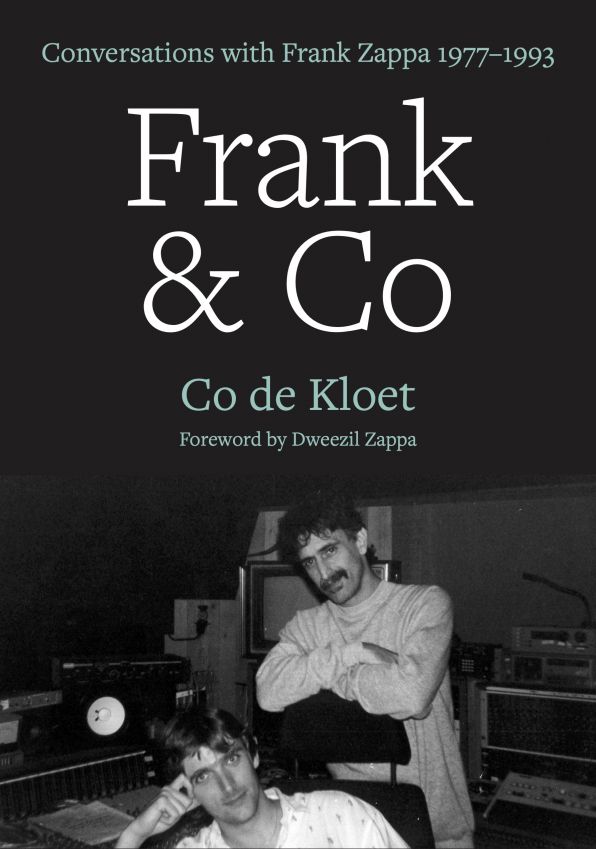 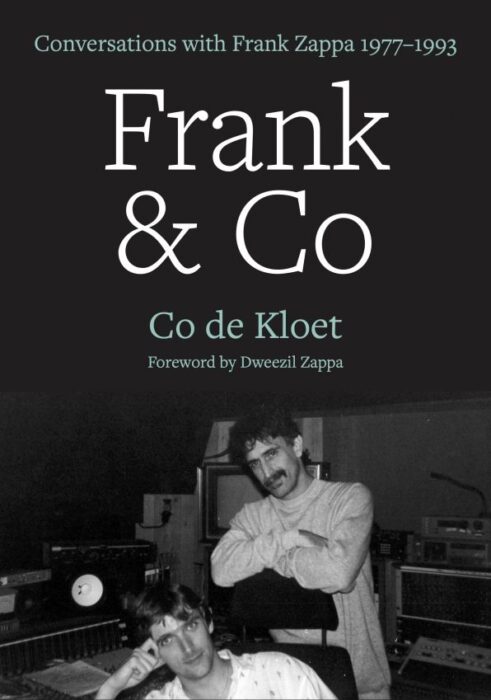 “I think the best way to start when somebody says something can’t be done, just look at them and say: why not?”

What would we give to have Frank Zappa back to make sense of these weird times? The age of Q Anon, Trump and rampant conspiracy theories covering just about everything imaginable was made for the cynical American polymath to run riot with, he sadly didn’t live to see it. He did, however, blaze a trail through the earlier age of televangelists, PMRC and the rise of the blue rinse Republicans and an emergent cultural stupidity in his own country and beyond. Co de Kloet presents a fabulous volume of interviews covering this period, along with some insightful background information offering a glimpse into the day to day workings of the Zappa empire.

This fascinating book of interviews covers Frank’s incredibly fertile period from 1977 up to his death in 1993 and as much as anything shows an emergent and developing respect, friendship and collaboration between de Kloet and the notoriously prickly Frank Zappa. In addition to insightful and unusually non-confrontational interviews with Frank, Co also interviews some of his more well-known collaborators, including Jimmy Carl Black, Flo and Eddie, Pamela Zarubica aka Suzy Creamcheese, and best of all, the final comprehensive interview with Don Van Vliet aka Captain Beefheart from the early ’90s.

Co de Kloet is something of a polymath himself, being a well-known radio producer and presenter, an event promoter, a composer and in his own words a “Cultural Catalyst” in his native Netherlands. The start of the book finds him as a naive but ballsy 18-year-old, stalking Zappa in Amsterdam, where his band are performing. In the grand tradition of starstruck fans he starts off by asking him “Are you Frank Zappa?” but, weary of more worldly journalists and pundits, Frank shows his softer side to the ambitious would be reporter and grants him an interview. From the get-go, Co’s chat’s with Frank are able to illuminate various facets of Frank’s character that more conventional journalists miss, Zappa often defaulting to a defensive obnoxiousness in the face of questions that he has answered dozens of times before.

That the interviews appear in strict chronological order presents a kind of ad hoc biography. We see Franks early tussles with censors in the US and Canada expand into a cause celebre. As the ’80’s roll on, we see him struggling to see his orchestral works performed to his satisfaction, before finding the kind of classical collaborators, such as Kent Nagano (who submits to a fabulous interview in the book), who have the will and ability to do his works justice. We see him falling in and out and in and out again with rock music, as his vision expands to the point of unwieldy collapse in the late ’80s (oh how I regret missing his final UK concerts, as he probably regretted performing them!). Finally, his stubbornness when his relentless work ethic comes up against his own mortality over the final, painful but oh so productive, years of his life.

In between, we get insight into the values and political ideas that made Frank Zappa tick, without the polemicising that he was often given to. In talking about orchestral unions, he deconstructs the whole concept of them

“Fuck Unions is what I got to say…. The way it works is that whenever someone in a union says ‘We are going on a strike to get more money they think that when they have won the strike they have succeeded. But they ever do, because the person giving them the money raises the price even more, and the person who loses is the consumer. They are fucking themselves in the nose and they don’t even realise”.

A particular bugbear of his, Frank got to explore this theme more fully on “Stick Together”… while he remained a stalwart of the counter culture, he often referred to himself as a classical conservative and ran for president on the libertarian ticket.

By the time we reach the mid-1980’s, Zappa has become one of the preeminent campaigners against the emergent censorship of rock and rap music, appearing at the PMRC senate hearing and railing against the absurdity of some of the suggestions of the anti-rock lobby

There is too, some critiquing of the late ’80’s US state with his demolition of infamous rogue agent Oliver North predating Trump’s authoritarian America. Zappa would often say things that his more temperate contemporaries wouldn’t dare to :

“They’ve built a concentration camp (in Louisiana) to round up Arabs. The mayor said he wished they would round them up soon because it would help the economy of his city…. It was further reported that the concentration camp was built as part of Oliver North’s plan to suspend the US constitution.”

In between, there is a great deal of musical ephemera, which will be music to the ears of the Zappaphile, and Co seems to have an even great knowledge of Frank’s setlists and repertoire than the man himself as they argue about whether a certain lineup ever played “Brown Shoes” (Frank insists they didn’t, Co, of course, has a tape to prove that they did!)

There is also an insight into the way that Zappa saw himself as the leader and creative fulcrum of whatever he was involved with, as he rails against The Grandmothers project (comprised of his former bandmates), as being a cynical money-making exercise off the back of his creative work. It’s to Co’s credit that he makes a point of interviewing said former bandmates for balance, who in turn try to emphasise the collaborative nature of the work that created classics like “Freak Out” and “200 Motels”

As their relationship develops, Frank seems to develop a genuine respect for de Kloet, based on Co’s working knowledge of the technical side of the media, and his deep and broad appreciation of not only Franks music but that of his influences, specifically Edgard Varèse, Igor Stravinsky and Pierre Boulez who Co and Frank discuss at length in the context of his own classical ambitions and de Kloet’s involvement in producing broadcasts of modern classical music in the Netherlands. Eventually, the two forge a working relationship that goes beyond artist and fan (or journalist) and Co becomes a broker for concert footage of Zappa in the Netherlands and in Northern Europe, with the once starstruck young fan privy to unreleased and brand new material, and the opportunity for creative collaboration with some Zappa alumni.

Following Frank Zappa’s death in 1993, de Kloet continues to promote the composers work in a series of projects bringing together his collaborators for interviews, performances and to create new works. He works with George Duke on a production for Zappanale (an annual tribute event running in Germany since 1990), and with Captain Beefheart’s final guitarist Gary Lucas based on an interview Co did with Beefheart in the year of Frank’s passing and what turned out to be Don’s last long-form interview before Multiple Sclerosis rendered him largely silent in his remaining years. The script of ‘I Have A Cat’ is included in full as a “bonus track” in the book and it is truly magical, with Don at one point, via a phone interview, naming the Beefheart albums which Co has in order, in a pile in front of him as the interview is conducted, like the mystical conjurer that he was.

Frank’s son Dweezil calls this book “Analogous to a documentary movie for your brain” which is true in a sense, but it’s also a proper chronological biography, written via intimate conversations, with both Frank Zappa and some of the more auspicious people around him, and it wouldn’t have worked as well as it does with more than one interviewer, or with someone who Frank hadn’t liked and trusted. It’s also a great exploration of his musical legacy by someone who really understands it.

The substantial volume is a must for fans of the man and the music and a great accompaniment to his own ‘The Real Frank Zappa Book’, Sheik Yerbouti will live forever as long as friends and fans like de Kloet keep his memory alive with labours of love like ‘Frank & Co’. Those are his footprints right there…