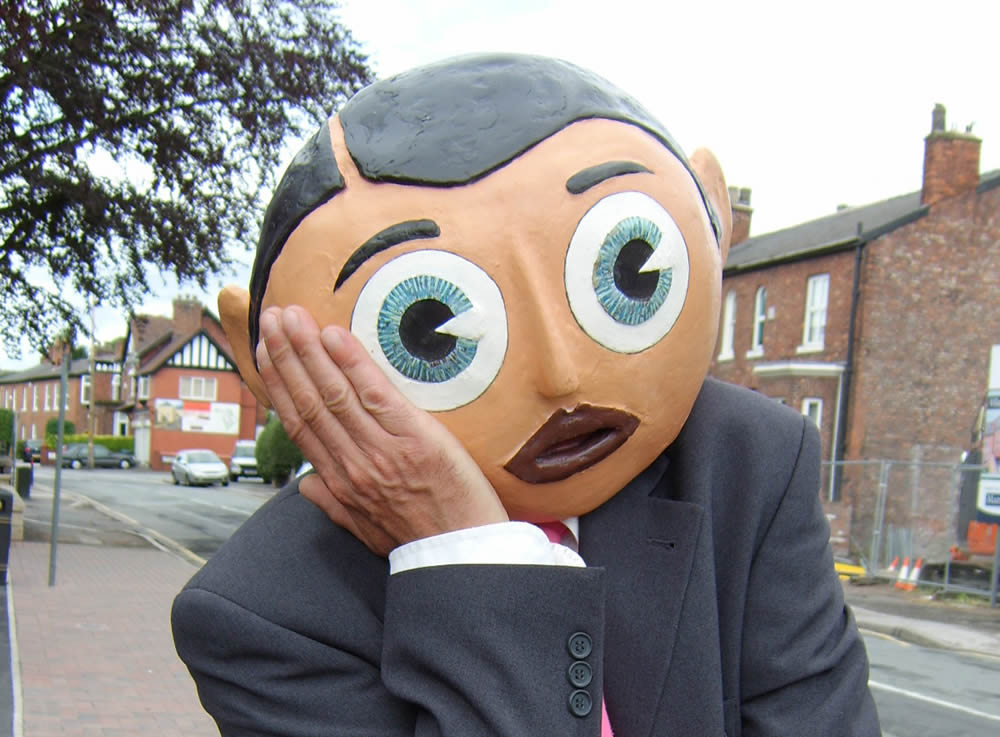 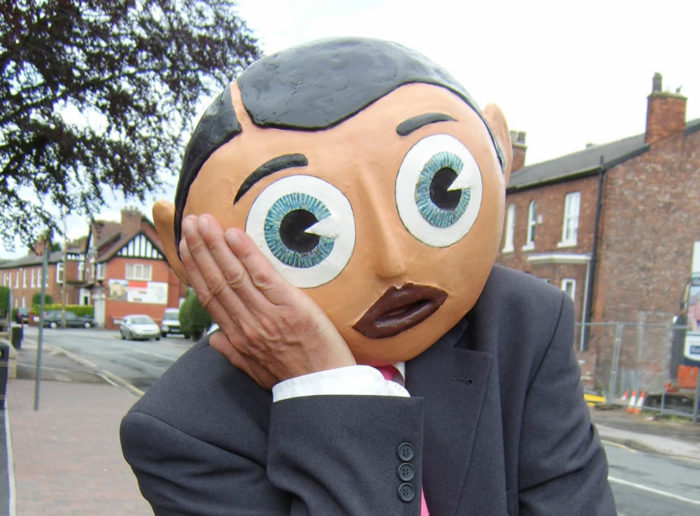 The film documentary Being Frank follows the life of comedian Frank Sidebottom and his creator Chris Sievey. Nigel Carr reviews the release for Louder Than War.

Being Frank takes us on a roller-coaster ride from Chris’s early days as a struggling musician, through his glory days when Frank Sidebottom fronted his own TV show, through his gradual decline and to his untimely death in 2010 at just 54.

Producer and Director Steve Sullivan took on the task in 2011, one which would prove to be a seven-year slog, going through mountains of material, listening and watching hundreds of hours of cassettes,  videos and DVDs, to compile what would result in a 105-minute film.

Fascinated by the music of the Beatles Chris and brother Martin took them themselves off to Apple HQ s in 1970. They refused to leave until they had been seen and ended up recording a session which resulted in several demos. Spurred on by the apparent interest Chris took it upon himself to send them to every record company in the UK, even writing his own rejection letter which elicited some interesting replies!

It’s this sense of madness coupled with flashes of true genius, a massive dollop of self-belief and sheer determination that weaves itself through the film. Chris is revealed as a true maverick, a one-off, a visionary, a master artist and comedian.

The film is dense with stories of Chris and Frank, the forever 35-year-old who lived with his mum – ‘where did Chris end and Frank begin’ being a common theme. One of possible schizophrenia where Chris would answer the home phone and when the caller asked to speak to Frank would quickly disappear only to return in character.

Rather than critically catalogue Chris’s life chronologically, Being Frank looks through the eyes of his family, friends and collaborators. Freshies members Rick Sarko, Barry Spencer and Mike Doherty recite endless experiences of working and touring with Chris. The re-recording of the vocal to the song ‘I’m in Love With the Girl On the Manchester Virgin Megastore Checkout Desk’ because of the word ‘Virgin’, (“we accidentally deleted the guitars as well” – Barry Spencer),  the BBC strike that would deprive them of a possible career breaking spot on Top Of The Pops and his effect on the band members. “I’m still damaged” (Rick Sarko). 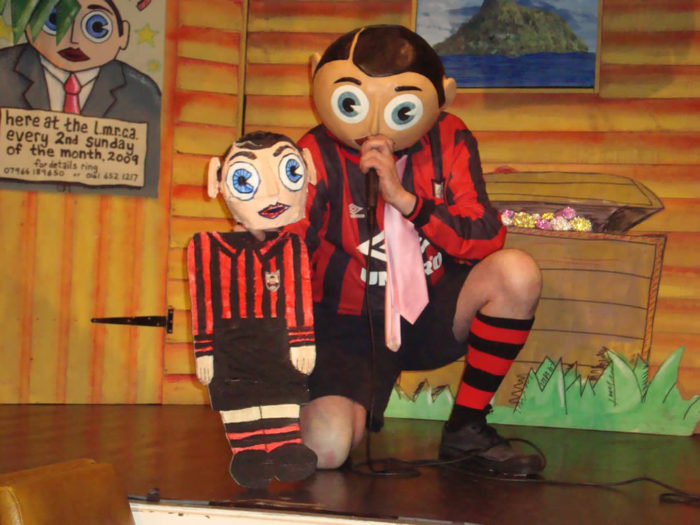 John Cooper Clarke makes a welcome appearance along with Ross Noble, John Thompson, Edweena Banger, Johnny Vegas and Mark Radcliffe, who played Mr Emerson Lake, the drummer in Frank’s Oh Blimey band. His story of attempting to play snooker on the tour bus is the stuff of legend!

The stories of Frank on-stage along with clips of his performances are hilarious. Chris never took his papier-mâché head off in public and would be furious if anyone attempted to take photographs. He voiced cardboard puppet Little Frank and his girlfriend Denise (a puppet venting a puppet!) whose head was stolen after a gig. Undeterred and not prepared to pay the ransom, Frank soldiered on performing with a headless Denise, simply because it was funnier!

Frank’s popularity peaked in the early 1990s when he was offered his own TV show at Yorkshire TV, ‘Frank Sidebottom’s Fantastic Shed Show’ where Caroline Aherne debuted Mrs Merton and big stars were subjected to Franks unique interviewing style. Frank to David Soul: “Have you ever been on an aeroplane? David Soul: “Erm, Yes, Frank: “What’s it like?”

We’re swept along in the madness that saw success accelerate into substance abuse which eventually lead to him and Paula splitting, and Frank being put on ice.

After finding an alternative career working at Hot Animations (having failed the interview he just turned up the following day and started working there anyway!) Frank Sidebottom was rekindled in 2006 when he reappeared on TV fronting ‘The Frank Sidebottom Show’ launched on Manchester’s Channel M. 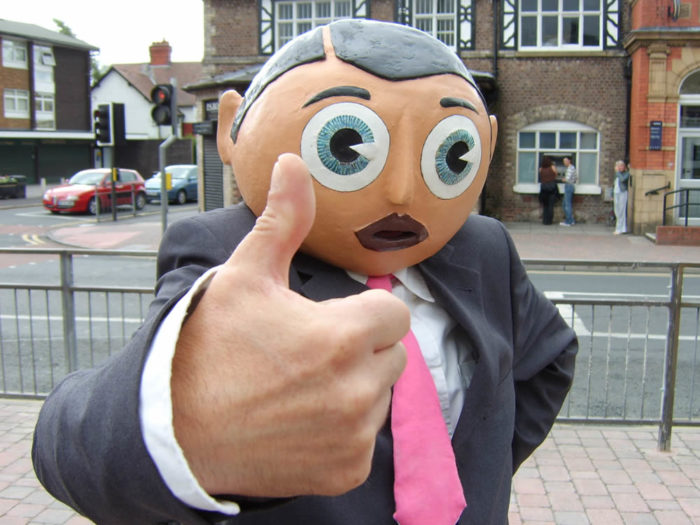 He toured sporadically in the years up to his death banging out Bontempi versions of classics such as ‘Timperley Sunset’, Three Shirts On The Line and Look Who’s Been on Match of The Day (you have, in yer big shorts!) to dwindling audiences. He passed away from cancer on the 21st of June 2010.

The appearance of Chris’s family adds real depth and warmth to the husband and father who’s default setting was daft. Son Stirling reminisces about his amazing upbringing, unlike any of the other kids in his class. Long suffering wife Paula describes their difficult relationship where Chris just didn’t understand money, “when the bailiff turned up to take the telly the kids just stared at the wall”. When daughter Asher and youngest son Harrison (who tragically passed away five years after Chris) talk about their father with such affection it’s hard not to shed a tear.

However much I write here, I simply cannot do the film the justice it deserves. It is brilliantly and sensitively put together, full of pathos, jam-packed with Chris’s zany comedy moments, yet ultimately tragic. it leaves you feeling warm and fuzzy yet sad at the enormous loss of a genuine genius.

Wonderfully soundtracked and interspersed with melancholic Sievey recorded piano pieces and narrated by brother Martin, it is a must-see film. It brings the man and the character to life in a unique way and will have you crying and laughing out loud.

The film is released on March 29th both in cinemas and digitally. Watch the trailer here:

The official site is here: https://www.beingfrankmovie.com/

Bobbins (Do they know what this word means?) is the Frank Sidebottom exhibition at Central Library Manchester until April 30th –  Entry is free (Closed on Sundays)