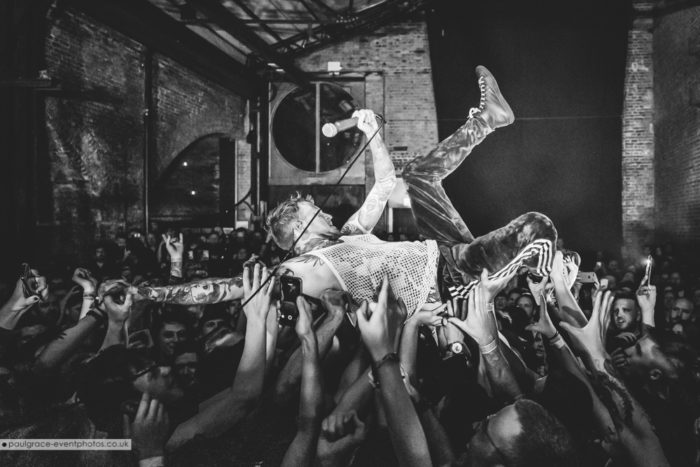 Frank Carter & The Rattlesnakes take on the capital and put on a show that justifies their status as one of the hottest live acts on the scene. Paul Grace reviews and photographs for Louder Than War.

What a week it’s been for Frank Carter. His new record, End of Suffering, has received some fabulous reviews (read ours by Wayne Carey here), it’s been selling by the truckload, and he’s also coming to the close of an album launch mini-tour which has taken in numerous record stores and traditional gig venues throughout the UK.

Tonight Carter and his Rattlesnakes hit the capital. I’d always wanted to see and photograph one of Carter’s shows – his gigs are legendary chaotic, which always makes for perfect photographer fodder.

Why a Butterfly Can’t Love a Spider opens, it’s moody and dark as Carter’s vocal pierces the shadows and the track grows into its frenzied climax. A slightly sedate start perhaps with its stripped back instruments, but it doesn’t take long for Carter to dive into the effervescent crowd, where he spends much of the following two tracks, Tyrant Lizard King and Vampires. This man is clearly adored by his fans who provide physical and emotional support, as he stands on their shoulders and screams with banshee-like passion. 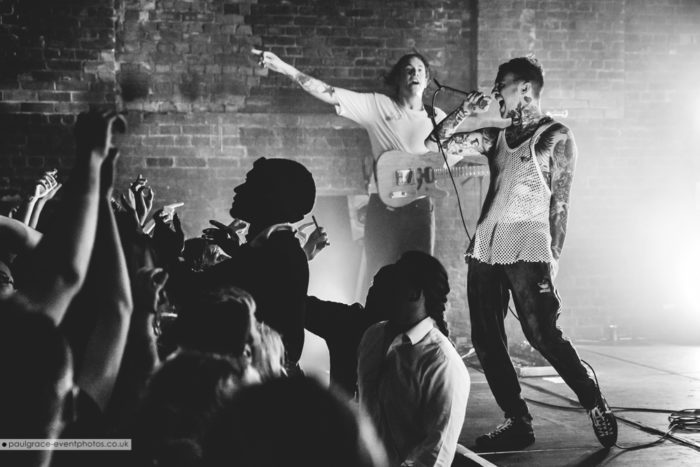 When he finally makes it back to the stage, he reveals he’s over the moon at how well the new album has been received and that, at the mid-week point, it’s at number three in the charts. We’re told we all have to buy more copies to “fucking get Hugh Jackman and his Greatest Showman album off the top!”.

New album tracks, Kitty Sucker and Supervillain, are infectious blasts of pop rock, while 2015’s Devil Inside Me, rocks the room and causes (more) carnage in the pit.

In a poignant moment just before Anxiety, Carter encourages men in the room to talk about their emotions. He announces, “Guys it’s OK to cry – we have to do it”, as he opens the dialogue on the leading killer of men under 50; suicide.

Throughout the show, guitarist Dean Richardson smashes the life out of his guitar, diving into the pit on numerous occasions, guitar and all. A cliché perhaps but totally convincing, and guitar-diving is pretty much essential at a gig like this anyhow! 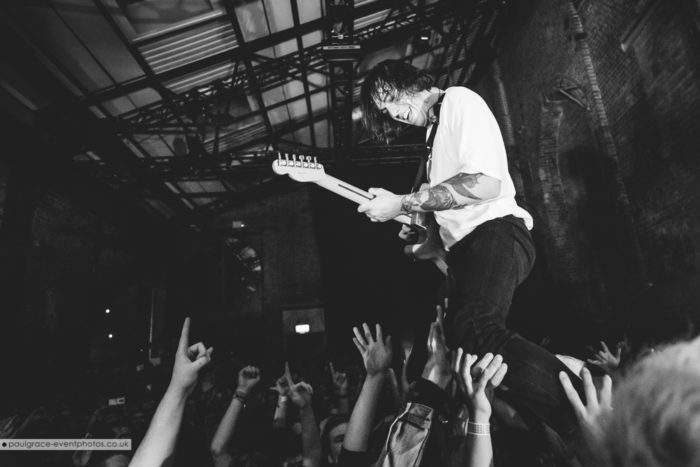 The crowd takes over vocal duties on final track of the night, I Hate You, as an emotional Carter bids us farewell and shares that we’ve been the best audience on the tour so far. Shucks.

Well, my first Frank Carter & The Rattlesnakes show certainly did not disappoint. On record Frank is frankly great (see what I did there?), but it’s his live performances that elevate the experience to mind-blowing levels. Essential.