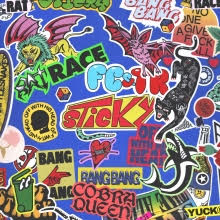 Frank Carter And The Rattlesnakes

Album number four and still going strong, Frank Carter And The Rattlesnakes are back with a day glo punk rock album full of the same old fury of the ballad busting End Of Suffering (reviewed here). Two years of pent up anger and lock down frustrations have made their mark on the showman himself and his guitar wielding partner  Dean Richardson reckons Wayne AF Carey…

What a better way to start the whole thing with mental opener Sticky, a riot of distorted bass and heavy riffs that sets the whole pace for Carters tales of dirty night outs, love bonds and hatred for the politically privileged. He’s not mincing his words as usual for one moment. Cupid’s Arrow bounces up and down, a filthy not so love song that keeps up the pace with an infectious bassline and lyrics full of drama. Pop punk at it’s height. Bang Bang is proper punk glam that explodes into a dirty as fuck chorus with Frank giving us that rasping cockney scream. Joined by fellows punks Lynks it’s a right good old rant about the “white privileged cunts” which will have you bouncing around with glee.

Take It To The Brink keeps up the scuzz, an industrial type clever mess that fades in and out with a filthy riff hanging around in the dark corners of Richardson’s head and a sinister scary dog barking along to Carter’s powerful vocals. My Town is a top drawer duel with Idles Joe Talbot having a friendly punk stand off with a frenetic bassline coupled with a smart bit of electronica that hammers home with frenetic energy and paints the picture of discarded drug paraphenalia and the shitty corners of every town we inhabit. “You drink until you all fall down, you piss all over sacred ground, you hate yourself, and you hate me” proclaims Joe Talbot in that familiar angry Idles slur. Go Get A Tattoo enters pop territory and Carter shows his love for the art of inking with Lynks guesting yet again in a rousing romp that’s catchy and sticks in your head.

Off With His Head kicks off with more dirty bass and Carters venom against the patriarchy is let loose with Cassyette joining in with her top range of smooth vocals, which end up screaming in true punk flavour, backed with some crazy riffs from Richardson’s toolbox of effects pedals. Cobra Queen is another pear shaped love song. Catchy as ever bass and drums that kick into another killer chorus with Carters vocals at their best ever. The closest to the material on End Of Suffering that you’ll get. A punchy ballad of sorts. Rat Race takes a dig at the politicians again and chugs along with that distorted bass making centre stage and some top double drumming that introduces some punishing guitar effects and even a bit of sax for your delight. Closer Original Sin has a surprise guest appearance from Primal Scream’s Bobby Gillespie and it works. Another addictive tune full of trademark Carter and Richardson. Gillespie sounds right at home with his familiar vocal tones that sound stoned and slick with his usual hint of ramped up rock n roll blues.

It’s an album of punk tunes that never bore, never let up and keep you hooked from the first track to the last. Carter is a clever bastard who pinched a bit of his old Gallows rawness and sprinkled it with some dayglo grit to produce a catchy as fuck album that’s full of humour, horror and hate that never haunts but hits you with ten tracks that never slow down and nail his sound to a tee. Addictive as fuck.