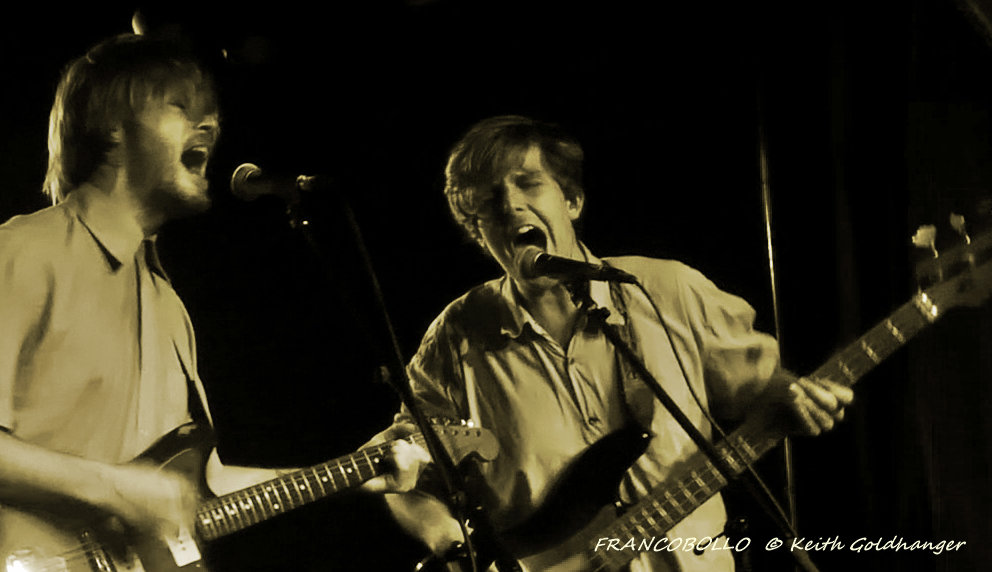 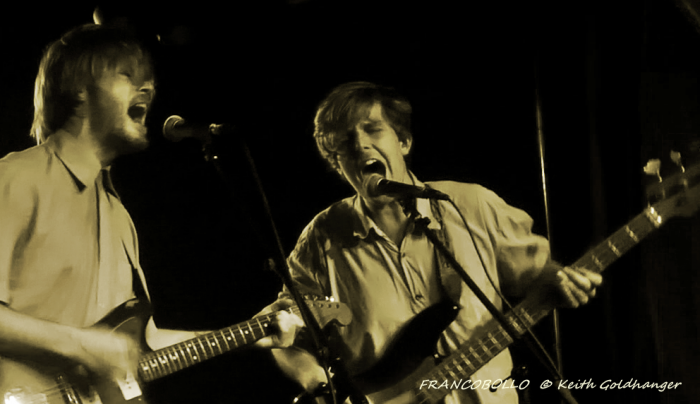 Keith Goldhanger updates us on the progress Francobollo seem to be making and would like them to be your favourite band one day too.

One of the many decent bands that have been treading the boards for a while now have finally released an album.
A brilliant album too.

Tonight, after a few high profile radio sessions, these three Swedes and one Englishman have found themselves in front of their first sold out headline audience in East London.

For those of us in attendance once again it’s noticeable that the faces here in the audience tonight are not recognisable. After countless free gigs, not forgetting all the other bands this lot have introduced us to since we first met them we know this crowd could have possible doubled if all the associates we’ve crossed paths with during Francobollo’s existence were not doing something else with their lives this evening.

For the first time since we first saw this band it feels that the small stage Francobollo stand on this evening may not even be large enough. Saun hits the drums from the right, everything else is nicely lined up along the front for us all to see . Petter, far left is joined more than once by associates who add backing vocals, tweak the keyboards and by the end are playing guitars left on the floor whilst the band members crawl over the audiences heads.  Yet again the band manage to complete another fabulous show, mixing the tunes everyone knows from the recent album plus a few new ones thrown in as well as ‘I found a Bike’ , an old favourite that we thought no one else would recognise but seem to be singing along with.

Simon’s crowd surfing, swapping his guitar for the drums, thanking us over and over for our attendance and coming to terms that we’ve all paid for this one. Payback for all the free shows they’ve given us in the past.

We’ve heard so many tunes from Francobollo now that we can’t remember what Pavement sounded like. There’s a thrashing Swell Maps sounding (new) tune in there too tonight and another that makes us think we may be entering Animal Collective territory before the pedals are switched off, the song changes direction and we’re waving our arms and swaying our heads in the only way that this band can be responsible for causing.

‘Wonderful’ could have come from Nirvana’s unplugged album, Kinky Lola, a very odd but marvellous tune is welcomed by the crowd inside the Moth Club like a long lost friend. This tune has only been available for about a year, it’s the most unconventional song they play and it fits in perfectly with everything else they throw our way. For those of us who cannot count the number of shows they’ve seen by Francobollo on two hands anymore the hits keep coming and we can still chat about the songs they’ve omitted this evening before getting the bus home.

Future Lover has the audience singing the chorus unprompted, bodies are on shoulders, arms are swaying in the crowd, Sam drops his bass, builds a small drum kit next to Sauns’, leaves it for a few seconds to float over the audience in front of him, hangs off the lighting rig in the centre of the room before returning to continue where he left off. The audience get increasingly animated the longer the show goes on and are singing along now.

Francobollo are finally getting the adoration they deserve. This isn’t simply a highlight of Francobollo’s existence but an indication of more things to come. A band that have persevered, introduced us to so many other great bands and continued to write earth shattering songs we can sing with a pint in our hand , listen to whilst sitting on the bus or sound tracking a lazy afternoon nursing the aftermath of a heavy Sunday lunch. They remind us of so many great bands from the 90’s and some of us hope they reach out to the people we used to bump into back then that we know may love this band to bits just as much as one or two of us do currently and have done for a while now.

The world seems to be catching up at last.

This band also played but I want them to invite me to their next show so I can tell you more about them because they were like this and this rules big time.

The other band I should mention were this band from Cardiff, Himalayas.  They all have nice shirts and nice hair but were just too loud, too serious and sounded like the Arctic Monkeys rehearsing encores for a forthcoming Wembley stadium appearance.  Therefore, many of you may love this also.