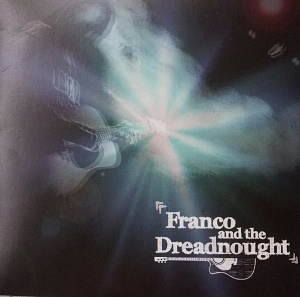 Despite me (stupidly) thinking that the Dreadnought part of this album might be a reference to reggae or dub, I was more than pleasantly surprised to hear what was on offer from the debut album by Franco.

John Blaycock (aka Franco) and his trusty Martin DXME Dreadnought guitar have combined to put together an album of twelve infectious, superbly written potential pop anthems. As well as guitar, Franco also contributes piano, drums and bass to complement his obvious songwriting skills and a slight vocal inflection which soon goes unnoticed amongst the quality of tunes on show.

Album opener, Moving Mountains give firm indication of why he has collaborated with writers for Corinne Bailey Rae and Christina Aguilera (Pam Sheyne) and former Shakespeare’s Sister Marcella Detroit. A sweeping, powerhouse of a track displaying Franco’s keen ear for a great melody. With a voice not unlike Billy Franks of The Faith Brothers, his lyrics are biting and often scathing but always impressive.

His tribute, and charity single Platt Fields for the Friends Of The Rusholme Park in Manchester is infectious in the highest order and worthy of a world stage. Love Sweet Home is a skiffle induced piece of indie pop-rock which will have you toe tapping and singing in no time, and Last Man Standing will melt your heart should you possess one.

Monster & Ghosts, co-written with Sheyne, is again a tune of the highest quality. Closing with The Catch Of The Pride, a real heartbreaker, a quite brilliant album ends. It should get huge recognition, not only because of the top notch tunes but also because of the heartfelt sincerity which has obviously been poured into it by the bucket full.