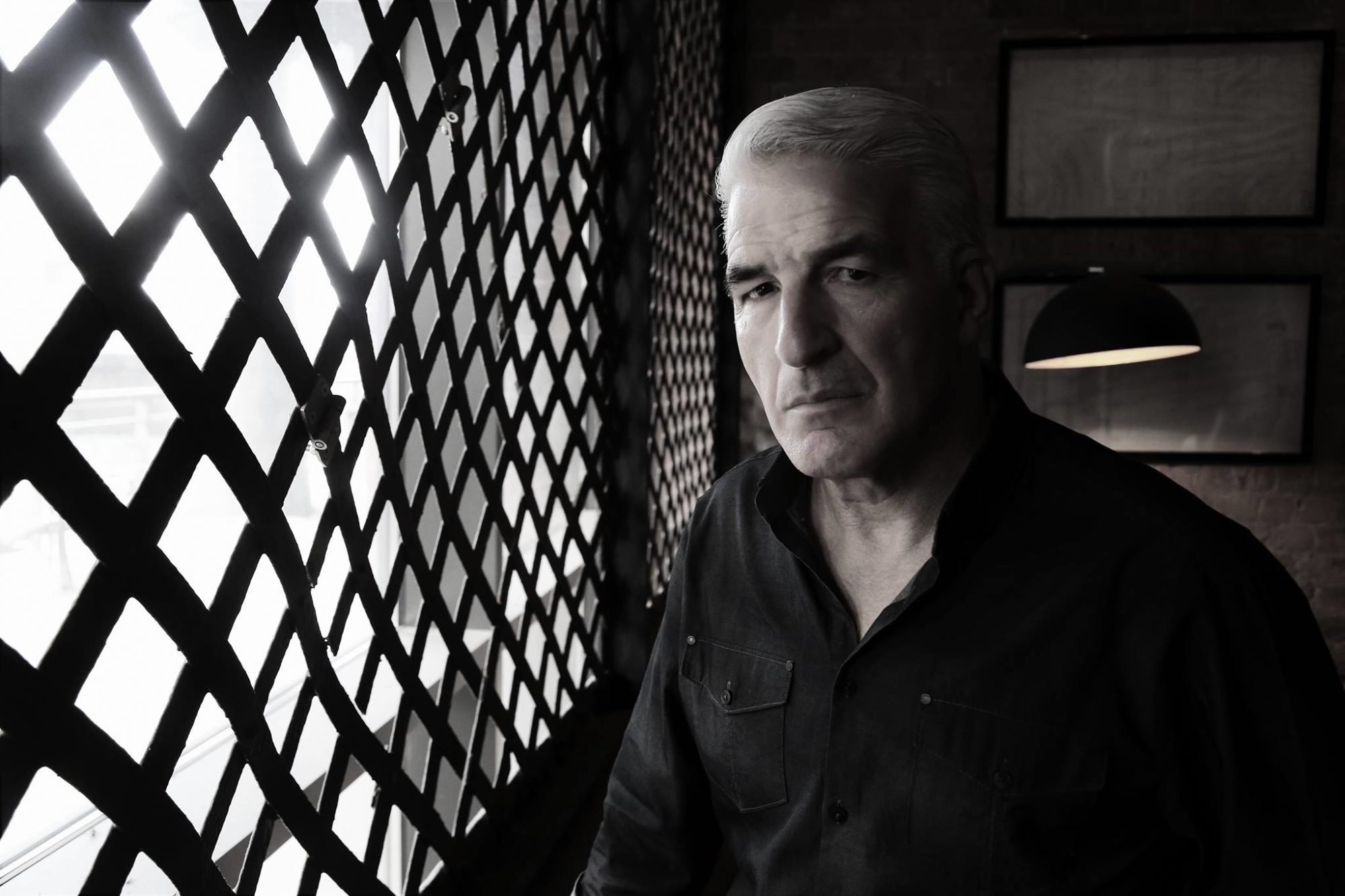 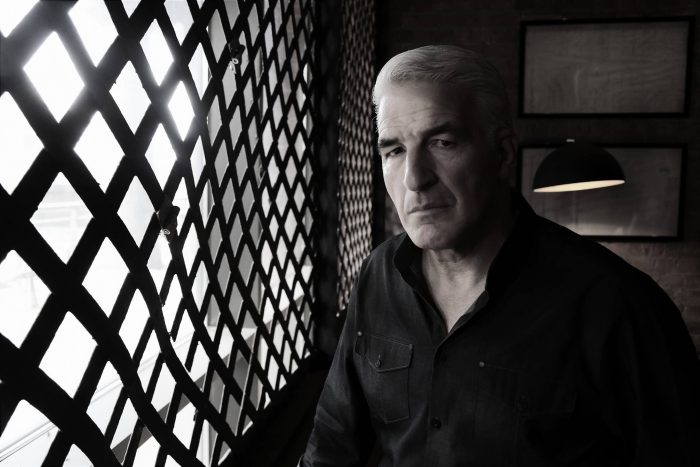 Being able to interview the on-the-beat music photographer who waded through crowds and even onto the stage to capture some of the most candid shots of 70s and 80s musicians – including the likes of The Ramones, The Clash, U2 and Talking Heads – is a privilege in itself. Louder Than War’s Emily Oldfield spoke to Francesco Mellina about his work…

Born in Italy in 1952, Mellina grew up on the small town of Polistena in Southern Calabria. Little did the boy who was obsessed by British music– particularly the records of The Beatles – know that he would soon be in Liverpool himself, creating some of the most iconic imagery of a generation.

Aged just 16, Mellina went on a tour of Europe which ended with him settling in Liverpool when Merseybeat had exploded and the North was fizzing with fresh music.
Taking a camera with him to capture not just what he saw, but convey the experience, Mellina threw himself into grassroots gigs, the type where future stars were still support acts and the music was often at its wildest.

He made a living from it too. Images include Bono at not even 20 years old, being on-stage with Paul Weller, Roxy Music and many many more.

Feast on them for yourself… in his book ‘REVEALED: Youth culture, pop culture, subculture – The Photographs of Francesco Mellina 1977-1982’ (available in Liverpool Waterstones), the imagery shows the work of a photographer not afraid to get on the stage, be crushed in the crowd… and crucially, relishing every moment of the experience.

Mellina also set up Black Eye Records, managed the band Nightmares in Wax who later changed their name to Dead or Alive and now manages Generation, as well as still getting round to plenty of gigs himself.

1) Where were you born and when did you move to the UK?
“I was born in the Southern region of Calabria, and grew up in a town called Polistena. From a young age I was an anglophile… I was interested in everything English, especially the music culture and The Beatles. In Italy at the time, this was seen as very unusual! But when I found The Beatles, I found that I fell in love with everything they stood for – and that’s 39 years ago now. The decision to move and end up in Liverpool was not brave as such… I felt like I had a calling.”

2) How did the music culture of Liverpool seem different from that in Italy at the time?
“Where I grew up – there is no music! Well, no music culture of its own, so to speak. After all, this was an Italian town of 10-11,000 people in the late 60s, at a time when convention and communication were completely different.

“Honestly, compared to Liverpool, it felt like two different worlds. If I wanted to buy a record in Italy, I had to travel to the nearest big town – which was two hours there and two hours back.

“When I came to Liverpool, I felt I was meant to be in this city … that I had arrived home. I never felt anything untoward. I was in love with the city, even before I got here! I would never live anywhere else in the world now – after all, it has always been a vibrant city and had the things I liked. I’m not saying it’s that way for every person, that’s just how it is for me.”

3) Many of your photos are candid – often the subject does not know the photograph is being taken – why was this your favoured approach?
“There is a reason for that. An early interest of mine was photojournalism and one of my biggest inspirations was Don McCullin (a British photojournalist recognised for his war photography in particular). He had an amazing talent as well as huge courage. I actually believe that some of his photography in Vietnam changed the course of the Vietnam War – it made the Americans aware of what was happening, as he got into the thick of things.

“There was a point where I was actually considering becoming a war photographer myself… but I don’t think I have the same courage as McCullin. Music, gigs, became my little battleground… in a way.

“I was part of the crowd, got right in there – and people tended to respond positively. I wanted to capture what was going on.”

4) What do you think of all the phone cameras in the air – so often the regular sight at gigs now?
“I think it dilutes the sense of occasion, dilutes the very essence of photography. There’s no longer the romance and the wonder.

“When I once photographed The Clash…. I was the only photographer there. Now everyone is doing it on phones and a lot of the meaning is lost.

“Photography – I was dedicated and made a career out of it – I had my images in the likes of NME, Melody Maker. I had to be really determined. Now, there are technically brilliant photographs out there using the latest technology, but it means nothing.

“The reality is that not many are that good. Very very few manage to convey the atmosphere of what is going on.

“And to me, it is not just ‘the stars’ that matter. It is the people too, the people matter to me. I don’t idolise anybody, don’t believe in making idols out of people – we are all human beings, we all just happen to have different talents. Without people there, there would be nothing.”

5) How would you say live music culture has changed – and for better or worse?

“The way I see it, many people now have lost the interest of discovery… they don’t get out to things. Discovery is crucial. I remember the first time I photographed U2 – they were really young, opening at Brady’s in Liverpool and I was mesmerized. It was 1980 and Bono was just 19 years old.”

6) Do you have a favourite image you have taken/ person to have photographed?
“My favourite shot is the one 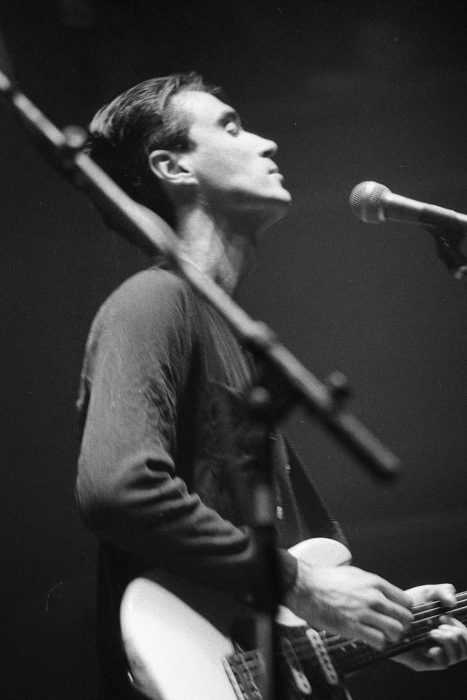 I took of David Byrne of Talking Heads, at Manchester’s Free Trade Hall in 1979. I wasn’t even meant to be going there – a mate just got in touch and asked if I would be interested.

“I really like the image – the light on his face, how the chord is held on the guitar… you can tell he is a man at peace with his music. As a photographer, that’s what I wanted to capture – the moment itself and everything he was feeling.”

7) Is there anyone you really wish you would have photographed?
“Loads! But especially Bob Marley. His team…they allowed me to meet him and say hello, but not photograph him, which I thought was strange.”

8) Why is/was attending small venues important to you?
“I prefer small venues… you can get up close and personal.

“Like Nick Cave is playing Manchester Arena, but it would feel pointless, to me personally, to photograph like that when I have photographed him in an incredible intimate venue with a crowd of about 100 people.

“Having grown up and been on the same stage as Thin Lizzy, a yard away from Paul Weller’s face, having the sweat of musicians drip onto me as they play – shooting somewhere so big and impersonal just wouldn’t be the same.

“It’s great at a smaller venue to feel part of the whole thing, like it’s ‘my gig’, you become part of it.”

9) Why would you still encourage people to get involved in current live music culture?
“Go out, spend typically £5 or less (rather than the price of a big stadium ticket) and have a great time supporting the up and coming bands.

“The advent of the internet seemed to make music easily accessible – and often had the effect of cheapening the experience, I think. Experiencing the music should have value and should matter – it can be very influential.

“Take this example. I first saw Catfish and The Bottlemen playing in Liverpool with about 40 people in front of them. Before they started I was going to walk away, but I stayed…. And when I heard their music, I thought ‘wow!’.

“I went up to them afterwards and told them that their set was sensational. I made a point of going backstage and telling them… I don’t think they were quite sure what to make of it. Now they’ve gone on to have a Number 1 album.

“That’s the brilliant thing about finding music at the grassroots, musicians in their early days. They ‘belong to you’ in a way, and when you follow them you appreciate it, because you feel you have contributed.” 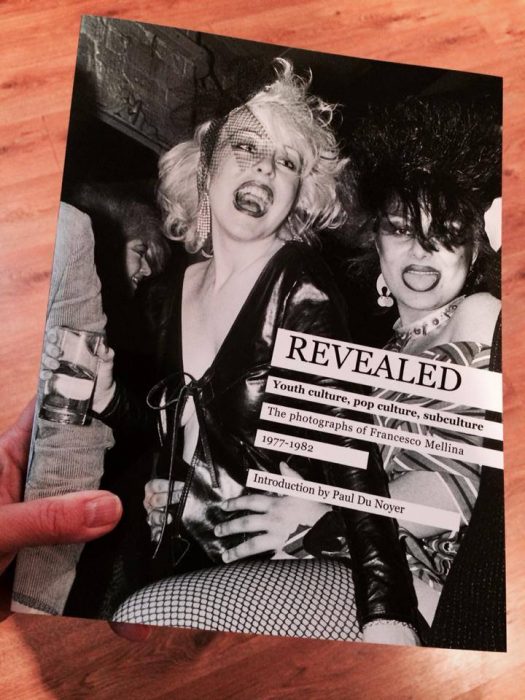 10) What are the bands you are into at the moment?
“I love all sorts of music – from opera to jazz to guitar bands. Just to recommend a few I’d say Generation, Red Rum Club (catch their next Manchester gig at Jimmy’s NQ, 18 October https://www.facebook.com/events/324079234720988/) , The Blinders, The Jacobins, Queen Zee and the Sasstones, The Vryll Society, Mint. All different styles of music, all great.

“If I was to say a band I think are going to make it big pretty soon I think The Blinders… they’ve got it going.

“To make it – I think bands and musicians need to have something special, unique, something which distinguishes them. There is as well the concept of just being in the right place at the right time… and some people aren’t. After all, there are some bands out there who should be massive.”