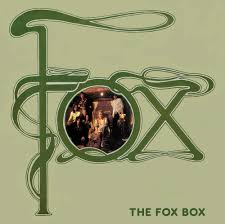 Thorough career retrospective of quirky 70s Pop/Glam band Fox, the singer of whom, Noosha Fox, would go on to be an influence on a young Kate Bush. This set includes all three of the band’s original albums and a compilation entitled “Images – A Selection”…..LTW’s Ian Canty looks at the fascinating history of this unusual but successful 70s outfit…….

Though associated with the Post-Glam mid-70s, Fox had roots that reached way back into the 60s. American Kenny Young was the key figure in the band and already had a busy career from the early part of that decade onwards. He had great success as a songwriter, penning (along with Arthur Resnick) the Drifters’ classic “Under The Boardwalk” which was a huge hit in 1964 and was covered by many other acts subsequently (including the Rolling Stones and the Undertones). Not to be outdone guitarist Herbie Armstrong was a member of Belfast’s Garage monsters the Wheels, contemporaries of Van Morrison’s Them and best known for the single “Bad Little Woman”. Just prior to his involvement in Fox he was part of a duo with another ex-Wheel Rod Demick and recorded the album “Little Willie Ramble”(!) which was well received but a slow seller (it was re-released on RPM a few years back to a good reception).

Young discovered Aussie singer Susan Traynor (then part of Folk band Wooden Horse), the future Noosha Fox, whilst recording a solo album. The six piece band came together during 1974, portraying a kind of Roxy Music/Sparks/”Cabaret” jaded elegance with Noosha’s coy, unusual voice being the band’s sonic trademark and her glamourous “film star” image perfect visual compliment. With Young and co being musical magpies who could shift gears from one genre to another and back again in the same song, they were the perfect band for the time.

Fox were met with almost immediate success with their debut single (the oddball but addictive “Only You Can”) and self-titled album both reaching the UK Top Ten and gaining critical acclaim. The first disc here is that debut LP (plus some bonus tracks including Noosha’s solo single “Georgina Bailey”/”Pretty Boy” which hit the charts 3 years later). The strange but alluring 60s Soul/Blues treatment of the classic oldie “Love Letters” welcomes us in but also sets out the band’s stall; steering clear from being mere Pop poppets by dint of their strange charm and unconventional approach. They really were the “state of the art” as far as Pop bands went at this juncture and if we for a moment scuff out the imagined “Year Zero” line Punk installed we see that Noosha was really in the mode of the kind of unconventional female singer we would see more of as the 70s went by, in the same way as later Lene Lovich, Toyah, Bette Bright and even Kate Bush were.

“He’s Got Magic” is everything that is good about the band in one neat package. Lurching through changes of rhythm and style with Noosha’s mannered vocal right up front, cajoling the song along until its unique coda, it’s the Phil Spector Wall Of Sound transmuted through Glam, which adds up to a masterpiece of 70s Pop Music. Somehow it missed out on the charts despite have sure-fire smash written all over it. Though not heralded as any sort of genius producer, Kenny Young works wonders – sounds dart in from out of nowhere and then just disappear, things shift and suddenly drop-out and there’s classical leanings among a raft of other influences. All this betrays a restlessness and a constant urge not to do the obvious, which set Fox apart from the also-rans and chancers. This approach works marvellous on this debut, a quality recording.

However after the follow up hit, the gentle, unusual brilliance that is “Imagine Me, Imagine You”, things got rather more difficult for the band. The next album, “Tails Of Illusion”, stiffed and Fox spent the rest of 1975 in the chart wilderness as a result. In fairness they did tamper with a winning formula, with other members of the band taking over lead vocals on many of the songs. Noosha being such a focal point for Fox, it must have confused fans somewhat. Here they veer close to the kind of standard Pop/Rock of the time and lost a fair deal of what made them so appealing in the first place (the singalong “For Whatever It’s Worth” is very close to being MOR and the efforts with male leads don’t stand out).

Having said that there are some good songs on here, like the excellent, driving single (with a hint of the Peter Framptons) “Strange Ships” and “Minor Therapy” is also quite wonderful, great breathy vocals complimenting the heady and exotic music. Though “Kupu Kupu” is an epic piece of dreamy pop this was very much “difficult second album” territory and though very lushly arranged and clearly painstakingly produced it represented a backward step. “Tails” comes with two goofy bonus tracks recorded in the 90s, a Ragga(!) reading of “One More Night” with Noosha on lead vocals (more about that song later) and the similar but saucy “2 Rude 4 Words”, curtailing this bafflingly entry in the Fox oeuvre.

Luckily the band found themselves back on form and in the Top Ten with probably their most famous song “S-S-S-Single Bed”. This single that put them in the public eye again, a submerged but tight Funk/Reggae backing track with a great hook-line complimenting the cool, sultry vocal, was just the ticket. Sexy, catchy and meticulously constructed for immediate pleasure – a textbook example of when Pop Music works. “Blue Hotel”, the LP it came from, is a delight from beginning to end with a wistful, evocative undertone to most of the songs. The sleeve provide the perfect image to go with the music, an immaculately-clad Noosha staring out from her Art Deco living room with a slightly rueful look of indifference on her face, sort of “come hither but not too hither”. Like she would either kiss you or kick you, or worse just ignore you.

The title track has a line, “stretched out on my velvet shawl” which tells you most everything about Fox in six words, but great song buffets great song on this LP. Doo Wop, Hawaiian guitar, “theatrical” production numbers, Proto New Wave are all stuffed into the mix and there’s even a faint hint of the Psychedelic Furs in Noosha’s sad, sad voice on “Moustaches On The Moon” and “Almond Eyes”. It all ends with “Make It Like It Used To Be”, a despairing but quite beautiful yearning for better days, leaving not a dry eye in the house (not just a glib line that either, I did have a tear in my eye afterwards).

It’s their best album, with plenty of gorgeous ballads, infectious dance numbers and high specification pop class. A beaut. If there was a minor criticism, the bonus track “Pain And Pleasure”, although being probably the best of the 1990s efforts, doesn’t belong tacked on the end of “Blue Hotel” and perhaps would have worked better on the fourth disc. Still it is just quibbling as I can always shift my lazy rear end and turn the CD off before it starts. So it doesn’t detract from this third platter being one of the best “just pre-Punk” albums.

Somehow “Blue Hotel” missed the chart and bar the old Noosha solo track “Georgina Bailey” narrowly missing the Top 40, that was it. The band folded which was a shame because out of all the groups from the early to mid 70s (outside the big boys and girls) Fox seemed best equipped to thrive alongside the New Wave, as they were always willing to take risks and could have modernised their sound without too much need for drastic change. Despite that the band went their separate ways. Noosha’s solo career floundered after that initial mini-hit, Armstrong and Young formed Yellow Dog, who may have given Elvis Costello cause to splutter with the 1978 Pseudo New Wave “One More Night” and Pete Solley was involved with Wreckless Eric’s recordings (not happily if I remember what I read in Eric’s book correctly). Herbie Armstrong even performed on the risible “X Factor” a few years back!

The fourth disc here works as a greatest hits and also rounds up every other waif and stray in the Fox firmament. Always good to hear those singles and also a brief reformation which yielded the single “Electro People” (the theme for the BBC Kenny Everett show) is featured here which does seems to prove my point above, a decent update for the band in the 80s. “Model In A Leotard” and “I Want To Be Alone” wouldn’t have sounded out of place on Stiff Records’ 1978 release schedule, “Dancing With The Alien” is decent synthpop and “Captain Of Your Ship” retreads one of Young’s songs (a big hit for Reparata and the Delrons) for the 90s Dancefloor.

So it breaks down here to a fine debut LP with some good bonus tracks, a disappointing second where they lost it a bit, a third being a total delight plus a decent round up of what was left over on disc four. Though obviously not on the same level as Sparks or Roxy, Fox were a diverting and original Pop band buoyed by Kenny Young’s great songs and sonic pretentions plus Noosha’s unique vocals and presence. Though inconsistent they were capable of brilliance and “Blue Hotel” is just that, an “on the cusp” album of the New Wave which was as full of appealing oddities as that coming revolution. This set comes with a booklet that has an engaging memoir and interview with band leader Kenny Young and is an excellent catch-all compendium of a forgotten but superior Pop band. In their own peculiar way, Fox were stunning.