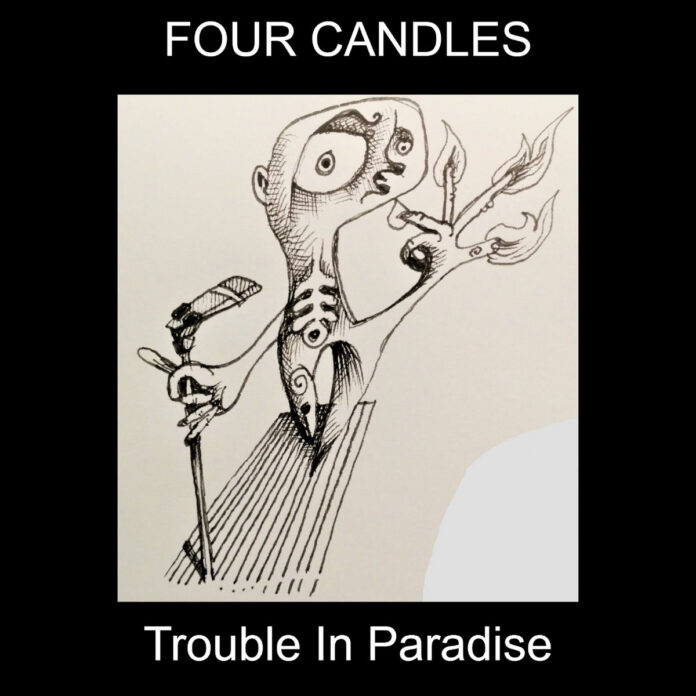 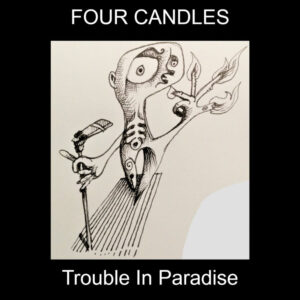 “In a nigh on 7 minute funk driven slab of Mancunian repetition Four Candles once again demonstrate that they are (one of) the most important band(s) in the Manchester Conurbation. Moss’s ironic rant about the “troubles” of the wealthy is a fitting testament to a year where nepotism and greed have ruled our lives whilst the poor and vulnerable have suffered”

This is just a brilliant track.

I use the word (track) instead of song deliberately, because it’s not strictly sung – and the music and the words, the art and the politics all combine perfectly.  It’s a clever, groovy art-statement on class-warfare set to music.

It’s the common man attempting to put himself in the mind of the privileged few.

(Ian Moss won’t mind me calling him ‘common’… it’s a step up from ‘scum’ and better than ‘pleb’ and I’ve met the man: common as muck he is, but a true artist compelled to create non-stop and agitate, inspire, infuriate and confound all around him.)

That bass-line is a direct descendant (twice removed) of Buzzcocks ‘Why Can’t I Touch It?’ and there is somehow a kinship with The Fall’s ‘Lost In Music’ cover and prime PIL.  The nods to the Small Faces and the Stones in the lyrics are cool too… Anyway…. enjoy!

This really does deserve to get on the national radio. Whilst not obviously commercial, it’s got such a great addictive groove and the narration is in the great Northern post-punk poetic tradition.

I’ve written about Four Candles many times before -since the start: It is interesting to see how they have constantly moved forwards… and this, is their best yet.

Killing The Image (2017)  –  Four Candles, despite the comedy referencing moniker are a serious band whose punk-is-change ethos means they can only accurately be called an experimental rock band who pull together in different directions. this is a new band, with an intensity and uncompromising purposefulness.

Four Candles: Spiritual Rapture  (2018)  –  There is definitely a progression here.  Everything is gelling more and each constituent part is better, sleeker, funkier.

Nettle Rash  (2019)   –  This is a very difficult album.  The bands most overtly political – reacting to the times -and their most accomplished – but their most uncompromising…  It has moments where it is absolutely beautiful: studiously intense yet transcendental… but others when it is full of lyrical bile and musical ugliness.

Alternative Golf EP (June 2020)  –  The four song format suits them well. They cram all their skill and passion in and come over stronger than trying to reproduce a whole live-set in the studio. Less is More. This is Four Candles… burning bright. 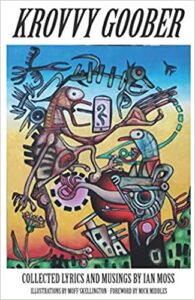 Ian Moss also has a book out of his collected lyrics and musings with illustrations by Moff Skellington and input from a host of Manc heroes (Mick Middles, Paul Hanley…) – with a soundtrack album to accompany it – it’s called Krovvy Goober and the full info is here