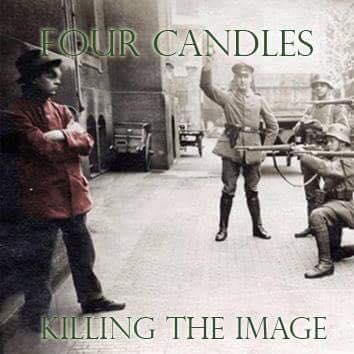 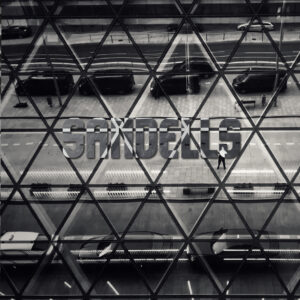 Salford bands made up of young-at-heart veterans still pushing the boundaries and themselves. Ged Babey struggles to invent new sub-genre pigeon-holes for both bands, so gives up and just enjoys the music.

The Sandells favour the term ‘krautpunk’ which they coined for themselves, but it needs the evergreen ‘psych’ tagged on the front to my mind. Their name gives away one of their many and varied influences.

Four Candles, despite the comedy referencing moniker are a serious band whose punk-is-change ethos means they can only accurately be called an experimental rock band who pull together in different directions.

Both are from Salford and their frontmen have long histories and CV’s.  Four Candles Ian Moss has been in the Hamsters, Sicknurse, Kill Pretty and a dozen electronic projects on the German Shepherd label.  Tim Lyons from the Sandells was in The Things, Harveys Rabbit and others. Neither are youngsters but both of them are what I once heard described as ‘creative incontinents’… people who just can’t stop the songs and music flowing out of them. (Don’t misinterpret that, it doesn’t mean their output is ‘shit’ -quite the opposite!)

Four Candles brittle funk-punk/art-rock/ garage-gothic is a world away from Sandells free-form, kraut-jazz, psych but both share more than geographical and low-budgetary similarities. They do what they do because they have to, they need to… it’s about a punk-inspired freedom of expression rather than any kind of financial reward or public acclaim.  These bands are doing it for themselves and for the faithful music-heads who want something familiar yet new. A musical language that they understand but goes off on new tangents. A music made up of fragments of the past re-assembled into a new, tense, present and possible future.

Four Candles are ex-Hamsters vocalist/lyricist Ian ” Moët” Moss and  bassist ‘Gentle’ Jon Rowlinson who joined forces with drummer Phil Peak ( who was in a band called Resist with Jon) and “Middlesbroughs finest export Mark Taylor on guitar”. Mark is possibly younger than the others and has a guitar sound and style unlike Moëts previous bands guitarists; he’s a bit of a Metal/Heavy Alt-Rock guitarist – but one who has an amazing restraint and inventive style, not to mention some great sounds/noise he can produce (thru a bank of effects pedals no doubt).  The combination of electronic drum-kit, punk-funk bass, a vocalist who rants great poetry and Marks guitar makes for as unique a listening proposition as you can get.

(Their Facebook tells me that …) The Sandells formed in Manchester in 2006 and are: Tim Lyons: Bass guitar and vocals, Brian Benson: Drums, Johann Kloos: Guitar, keyboards. During the period 2006-2009  they were backing band for ex- Can vocalist Damo Suzuki and also worked with Martin Bramah (the Fall/ Blue Orchids). Tim Lyons I knew from the Things -a legendary missing link between 80’s Psych/90’s Madchester -as they reformed a few years back. Johann is also a solo artiste on German Shepherd.

‘Forwards!’ seems to be the culmination of the past eleven years writing, gigging and recording; presumably on a budget of sod-all.

My knowledge of Psych and Krautrock is more bite-sized than encyclopedic but I can hear that Can, Arthur Lee’s Love and Standells type psych are at the core of the Sandells sound but it goes off on Hawkwind and Post-punk tangents and all  blurs into one very ger-oovy vibe indeed. There are probably seven shades and varieties of psychedelia on offer here – from Nuggets style stuff affectionately pastiche’d to Motorik Kraut groove via a sci-fi story-telling jazz-prog style -but all done with the kinetic energy of punk fueling the engine.

It has a deft lightness of touch even when they get heavy. Even when the songs exceed the six minute mark they still enrapture.

To be completely honest, I didn’t think this album was gonna be for me (too trippy and art-psych) but it took hold of my brain and convinced me that psychedelia can be fun, fast, varied, funny and ‘punk rock’ (maan).

In the same way as Scars turned A Clockwork Orange into a song; Horrorshow, The Sandells take Blade Runner as the inspiration for their song ‘Voight Kampff’ – which is a work of near-genius, opening with the question; “Tell me all of the good things you can remember about your mother?”.

The only instrumental Glissando -renamed NAC –  closes the album but the other songs have titles like ‘Cowboys Don’t Have Brollies’ and ‘Alien Intelligence’ and cover all psychedelic bases.   It is a great album to just get lost in. Eyes-closed, headphones-on, dead-time journey-music or rattling the walls, neighbour-annoyingly loud.

Four Candles are a more ‘difficult’ proposition. They take the Public Image Ltd blueprint and replace the reggae basslines with dry-funk and Lydons wail with a rhyming rant poetry.  Ian Moss  lyrical obsessions include a biographical approach ‘Napa State’ recounts the tale of The Cramps infamous gig in a mental hospital. He quotes Lux in the lyrics “They told me you people were crazy, but you seem OK to me’.

There is also a sports biog with a tale of the Ali-Frazier ‘Thrilla in Manilla’ which inadvertently sounds like the Rollins Band relocating to Salford and incorporating a touch of dub.

The best song, which to my mind stands head and shoulders above the others, and is worth the price of the album alone,  is a killer called-‘I Love The Truth (like Lenny Bruce)’.  It somehow reminds me of the wonderful Glaxo Babies, because of it’d repeated funk bassline – over which the guitar frantically scrubs and scribbles creating a beautiful chaotic noise with siren-like feedback, whilst Ian recites his increasingly frenzied poetry. (You can practically hear the veins bulging in his neck and forehead!)

‘Alpha-Beta’ is another track where guitarist Mark Taylor excels himself.

‘The Man With No Mirrors’, ‘Horse’ and ‘I Was Almost Happy’ are more conventionally structured and a few hark back to Kill Pretty, but this is a new band, with an intensity and uncompromising  purposefulness.

Very different albums, but both very good indeed and containing more passion, humour, inspirational tunes, grooves and ideas than many a younger band.  Get hold of both of them and dig the sound of the Salford Underground.

If I did the points out of ten thing; 9 for The Sandells and 8 for Four Candles….