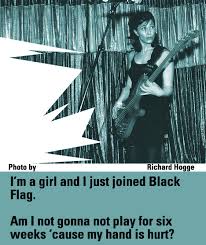 Former bassist with the iconic Black Flag, Kira Roessler, has won an Oscar for Best Sound Editing for Mad Max: Fury Road. It’s rare that the Oscars provides any heartwarming moments being a back slapping bash for the film industry but we truly love this story.

Roessler, who studied engineering at UCLA while she was a member of Black Flag, is also a dialogue editor who has worked on movies like Twilight: New Moon and the television show John Adams, for which she won an Emmy.