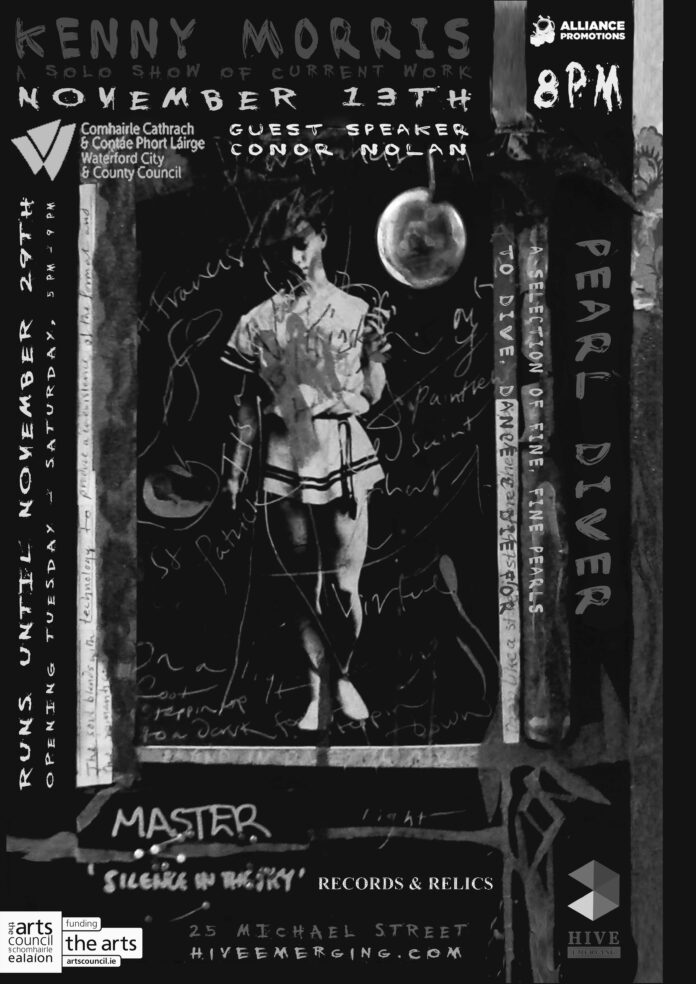 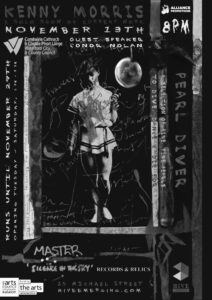 Hive Emerging are delighted to announce, “Pearl Diver”, a solo exhibition of current works by punk artist & music legend Kenny Morris.
Due for launch on Thursday the 13th of November, 8.oo pm, the show will be opened by City Arts Officer, Conor Nolan & accompanied by music & wine reception.
Morris’s dramatic return to the creative scene will feature a sprawling array of works inspired by a lifetime immersed in punk & draw from a broad & eclectic range of mediums including film, collage, paint & assemblage. This event has been brought to Waterford with the support of Alliance Promotions, & Records & Relics. The exhibition is due to continue at Hive until the 29th of November, opening Tuesday to Saturday from 5.00 pm until 9.00 pm.
Kenny Morris (born Kenneth Ian Morris 1 February 1957) studied Fine Art and Film-making at North East London Polytechnic & Camberwell School of Arts and Crafts where he, in 1977, joined Siouxsie and the Banshees & released the hugely influential albums The Scream and Join Hands. After the Banshees, Morris continued in film, making La Main Morte, featuring narration by Dorothy Lalanne & music by Morris, John Maybury and Jean-Michelle Baudry. In Ireland Morris has both taught & practiced art in Munster & Leinster & is currently based in Cork City.
Located in the very heart of the City, at 25 Michael Street, Waterford’s dedicated emerging arts space offers students, recent graduates & up & coming arts practitioners a broad choice of events & opportunities for the coming year. Providing for the cities rising creative community from visual art to music to film to design, the arts hub is rapidly becoming the centre for emerging talent in the City.
Details of upcoming events & opportunities are available on our website hiveemerging.com & facebook.com/hivegallery.