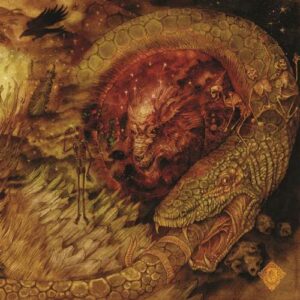 A Forest of Stars – Beware The Sword That You Cannot See

Over the last couple of years I have being fortunate enough to sit down on two separate occasions with, and in my own half-arsed way, interview one of the most creative, innovative and genuinely pleasant bands currently pushing the envelope of sonic alchemy. I’m talking about the Leeds based Black Metallers, A Forest of Stars, who have recently released their fourth album Beware The Sword That You Cannot See.

To simply label them as Black Metal is not only an injustice but a clear cut case of failing to see the much bigger picture that surrounds them. It’s true that Black Metal runs deep throughout the band and is a major driving force but A Forest of Stars have taken the original blueprint of the genre and transformed it into something quite unique, quintessentially English and in equal parts sinister yet stunningly beautiful. Not bad for a bunch of Victorians who describe themselves as “a pokey little band”.

Our last meeting took place at last year’s Damnation Festival in the band’s hometown and whilst they weren’t in a position to give away too many details about the album due to record company restrictions, I was told enough to get my expectations running feverishly high.

So what of this album then? Just looking at the lavish artwork tells the listener that what is about to follow isn’t going to be a standard run of the mill platter of metal.

Kicking off in fine style, the opening track Drawing Down the Rain is almost a mini album in it’s own right. A filthy amalgamation of blasts, folk influences and progressive segments that has probably more vision and originality than 97% of other UKBM bands will harness in their entire careers. This absolute maelstrom of sonic disorientation features a stunning mid-section of female vocals from Katheryne, Queen of the Ghosts that provides a perfect balance to the frenzied vocals of Mister Curse.

What becomes immediately obvious to the listener on the strength of this opening track is the magnificent production. Every subtlety of the instrumentation is crystal clear, the drums in particular sound incredible.

Hive Mindless lets the more progressive elements come to the fore, to my ears reminiscent in places of early Marillion, swirling keyboard lines towards the end adding to the overall atmosphere of oppressive confusion.

“Fuck you and the worms you rode in on” shrieks Curse at the opening of A Blaze of Hammers. A more guitar driven track that amongst all the technicality has the audacity to drop an absolute beast of a riff from nowhere that would make even the most jaded of heads bang. Building to a sublime climax the track slides into Virtus Sola Invictus with an almost spoken word delivery from Curse. The spite and malice is continuous throughout until a temporary respite is provided with a almost pastoral flute interlude but this is short lived and the aggression returns at the pinnacle of the track.

Continuing the journey deeper into disorientation, confusion and closing the first part of the album comes the outrageously titled Proboscis Master Versus The Powdered Seraphs. To say there is a lot going on in this track would be an an understatement. In some places it sounds like it’s being played backwards and after some dual vocals from Curse and Katheryne, borderline flamenco guitar leads into a violin driven wig out with a scattering of blast beats! Few bands would even attempt such ambition, let alone manage to successfully pull it off.

The second part of the album goes under the name of Pawn On The Universal Chessboard, a six part suite of songs that begins with the truly beautiful Mindslide. All space age ambience with haunting female vocals that segues into the Floydesque stylings of Have You Got A light, Boy?. There are even hints of the Godlike Type O Negative in this track before Curse returns with some more theatrical spoken word vocals. The sense of melancholy generated is almost crushing.

Perdurabo sees the band return to a more bombastic approach and An Automaton Adrift demonstrates some quite magnificent song structures. Curse dropping some of the finest lyrics since Martin Walkyier last picked up his quill and the folky violin climax that leads into most aggressive track on the album, A Lowly Worm, is sublime.

The heartbreaking realisation of how insignificant our lives are is perfectly captured on the album closer ‘Let There Be No Light’, once again, Katheryne taking the lead vocals and delivering lines such as “Smashed across the windscreen of the sky, that’s all we’ve ever been” stirring feelings of inevitable futility.

A Forest of Stars have created one of the most ambitious, grandiose and visionary pieces of what could be still classed as ‘extreme metal’ you are ever likely to hear. What could easily have got bogged down in a mire of utter pretentiousness is actually a work of stunning clarity and accessibility. The attention to detail within the band is quite remarkable, from the Victorian imagery to every aspect of their sound, nothing is left to chance and it all seems meticulous in approach. Check out the video for Drawing Down The Rain and witness the utter genius.

Beware The Sword That you Cannot See is available now on all the usual formats and some extremely special limited editions on Prophecy Records.

The band have just announced their first live appearance of 2015 at a charity event at Arden Road Social Club in Halifax on Saturday 16th of May. A full tour with Austria’s ‘Harakiri For The Skies’ is planned for October. As yet, no dates are available.

Find the band on these internet portals…