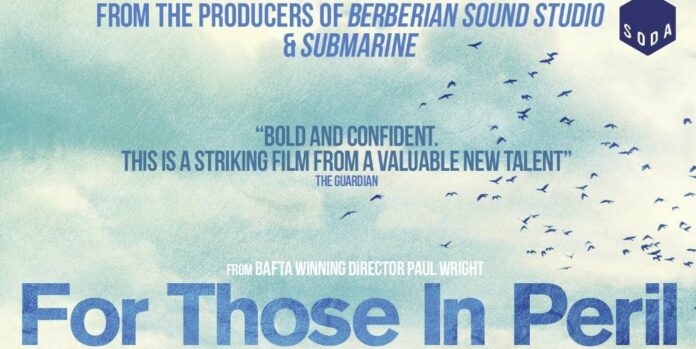 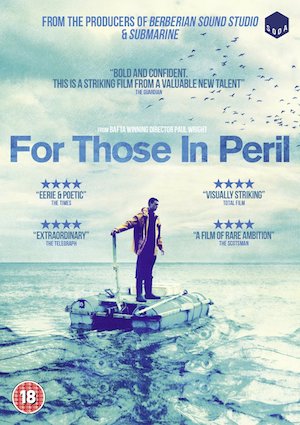 Out now on DVD

Winner of Scottish BAFTA for Best Film and a BIFA (British Independent Film Award) for Best Debut Director, Paul Wright’s For Those in Peril was premiered last year at Cannes as part of the Critics’ Week strand and screened last week at the South by Southwest Film Festival where it received some very positive reviews. It’s now out on DVD and deserves to be seen, says Louder Than War’s Jamie Havlin.

Filmed entirely in the isolated coastal village of Gourdon in Aberdeenshire with the North Sea as its backdrop, the film is an often bleak, even harrowing watch, but also a worthwhile one and its good points undoubtedly outweigh the flaws.

Aaron, played by rising star George MacKay, is a young misfit and the sole survivor of a tragic fishing boat accident that saw his brother Michael (Jordan Young) perish along with four young crewmates in circumstances that are never fully explained and which Aaron has no memory of.

This is the kind of village where if you aren’t employed on a trawler then it’s likely you work in a factory gutting the latest catch and, of course, everyone is devastated by the five deaths, none more so than Aaron and his mother Cathy, played by the always excellent Kate Dickie (of Red Road & Prometheus).

Gradually though, sections of the community begin to turn against Aaron and treat him as a pariah, although he does, crucially, receive support from Jane (Nichola Burley) the onetime intended fiancé of Michael, which infuriates her belligerent father (Michael Smiley).

On occasion Aaron’s behaviour doesn’t help matters and, even without the post-traumatic anguish, he would still clearly lack the kind of easy going self-confidence and ability to socialise displayed by his brother, who appears repeatedly in flashback. Had Michael been the one who’d survived, he would never have been as naive and tactless to plead with a local fisherman to let him get back to sea on his boat without thinking to mention his own loss, as this man’s son was one of the deceased.

Even so, it is hard to comprehend why so many of the villagers aren’t more sympathetic towards Aaron’s plight.

This is the type of community usually lauded as close-knit. It might display few signs of being part of the 21st Century world but in the age of the internet and TV shows that openly discuss the kind of issues that Aaron (and presumably others) are bound to be experiencing, it remains a mystery why no one bar his doctor seems to be familiar with the idea of survivor guilt.

Perhaps the story would have worked better if it had been set at least three or four decades earlier, though I should point out that Wright did research comparable real life incidents, speaking with people affected by loss and he has explained that the animosity is due to the character being a constant reminder of those who didn’t survive, a kind of ‘walking ghost’.

Wright, incidentally, was himself born and brought up in a remote spot on the east coast of Scotland where the mythology of the ocean was relayed to him as a child, although the bedtime fable that Aaron fixates on – recited to him in childhood by Cathy – about a devilish monster living at the bottom of the sea who curses the town and eats all its little children is an amalgam of myths and superstitions from around Europe.

A number of filmic approaches are utilised by Wright to plunge the audience into the increasingly disturbed state of Aaron’s mind: we see a collage of old Super 8 films and home videos of himself and Michael growing up, and more recent footage shot presumably on a mobile phone along with pixelated TV news reports.

Likewise, sound design is vital to Wright, another layer he uses imaginatively to reflect the mental imbalance of Aaron – his voice-overs are interweaved with snippets of anonymous dialogue that might belong to villagers or possibly come via radio vox pops, there’s some intriguing choral music too. Wright works with contrasts, distorted noises together with clean, sometimes even beautiful sounds, and the whole sensory experience is often disjointed and contradictory.

This is a singular and, in places, a very effective technique.

Another area where Wright excels is with his actors and he coaxes some exceptional performances from them. Some scenes will linger long in the memory. Cathy’s turn at a local karaoke night is utterly believable and almost unbearably poignant as she dedicates The First Time Ever I Saw Your Face to her ‘boys’ and then struggles to complete the song.

As with many first time film-makers, influences aren’t always difficult to detect and here the debt to Terrence Malick is conspicuous. Additionally, the subject matter brings to mind one of Wright’s favourite films, Nic Roeg’s masterful study of grief, Don’t Look Now, while one scene in which children don masks and parade along the high street as part of some local gala day tradition recalls the film that was originally paired with Don’t Look Now in cinema double bills – The Wickerman. And this procession has a wonderful twist that certainly took me by surprise.

For Those in Peril is a film that won’t be to everyone’s taste. It is self-consciously experimental at times and lacks the narrative drive that is generally expected in a modern day movie. The story’s daring ending, too, will likely divide viewers. There’s a number of ways that it can be read; magic realism, surrealism, as a poetic and allegorical dream or even as an extraordinary piece of realism, but it failed to entirely convince me.

I’ll predict here that Wright will go on to make better feature films but as debuts go, For Those in Peril is a very promising start to his career and an impressive industry calling card.

DVD Extras: Believe, a twenty minute short from 2009 that’s also a grim watch and which tackles the subject matter of grief and a disintegrating mind – with a cast including a superb Michael Smiley and Kate Dickie.