Home Blogs For The Love Of It: Billy Childish on Chris Broderick 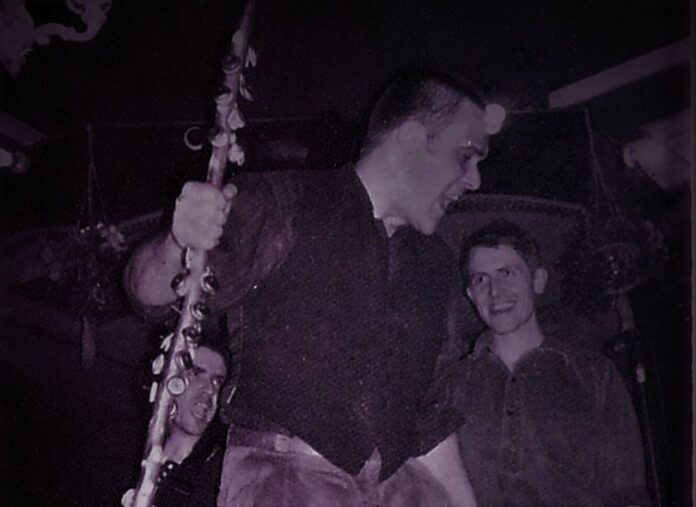 This is not really a eulogy or an obituary for the Singing Loins singer/songwriter Chris Broderick, nor is it an interview with Billy Childish (painter, author, poet, arguably the greatest living Englishman)… maybe it’s both, maybe neither.

Not one for sentiment, it was Billy’s idea to use a question & answer format. Being a long-time admirer of his music and his ‘confessional’ writing style meant Louder Than War writer Ged Babey held nothing back with his input.

It is a strange piece perhaps, where idiosyncratic artist and obsessive writer talk about the death of a friend to one and Facebook acquaintance of the other.

Childish talks to Babey about Chris Broderick for Louder Than War. Rest In Peace Chris.

(GB)  Billy, I suppose I asked you if you’d like to write something for Chris because, without you, none of us outside the Medway towns would have ever heard of him.  Without you recording and releasing their early work, the wider world would never have heard the joy and beauty of the Singing Loins.  So, Thank You.

Chris seems to have been an exemplary human being as well as one of England’s best folk songwriters.

(BC)   I don’t think anyone who knew Chris would describe him as such. He was a good guy and had good heart, but he had good and bad sides to him like all of us. Chris had a hand to play that many would have made a mess of it, so he did well. I’m not sure being counted as one as ‘England’s best folk song writers’ is a true, or necessary sentiment. He wrote many tunes with ‘Arf’ (and his other friends) that many enjoyed and liked. And maybe there are a few gems in there as well!

Was Chris a good friend of yours Billy?

We were quite close 30 years or so back. He asked me to help edit/publish his poetry. Then came the Singing Loins who I recorded and put out on Hangman records. It was great fun recording that stuff and we did hang out together for a few years and play some shows together. And we laughed a lot.

When and where did you first meet him?

Chris approached me when I was in The Milkshakes (early 1980’s) – to give his rock group (Wild Life) a support slot.

Was he as nice a man as he seems to be from his songs?

I guess you could say he was nice but he was also expert at falling out with people.

The two themes of my writing about music seem to be authenticity & integrity and death, which is why I’m a follower of your work Billy.  I know that you are not a believer in awards and medals – but I have a bee in my bonnet about people like Chris Broderick and yourself, to a lesser degree, not getting proper recognition and being appreciated by a wider audience whilst you’re alive. I want every underdog to have its day.

That’s very decent of you, thank you for the kind words. I’m sure Chris would like it, but might say ‘bollocks’ to being ‘a lesser degree’. But Chris did have a good sense of humour – which was handy as I would often tease him mercilessly.

I understand that the first two Loins albums were recorded in your bathroom?

Yes, they were, as was our joint LP when together: me, Chris and ‘Arf’. We rejigged some of my songs for ‘At the Bridge’ LP.  In this way, I introduced them to Ian at Damaged goods, where they found another home.

Were they a ‘raw folk’ band out of pure economic necessity –  they couldn’t afford electric guitars, amps and so on, to play punk rock – or did they/he have a deep-seated love of the folk idiom?  – or did he just want to tell stories?

Chris initially wanted to be a pop star (before I knew him) and was fated to be/replace Nik Kershaw (true).  This all went tits-up (apparently). He was then in a few local rock groups but I understand he grew disillusioned with that format and so came to a more stripped-down approach. I suggested we record live on an old 1/2 track machine (that I became the keeper of after The Pop Rivets. The Milkshakes, Delmonas, Mighty Caesars. Headcoats, Headcoatees, Natural Born Lovers, Black Hands etc . . . all recorded on this, to some extent or other.

Nice to meet you.

People think it’s made-up but my surname from birth is Babey ( pronounced ‘baby’) – and I was bullied relentlessly in primary school for it –“Are you a cry-baby Babey?” Whack!  Not that I’m bitter…. Made me the man I am I suppose.

My dad was christened Teddie Babey (rather than Edward, abbreviated to Teddie). In 1943 he joined the Army as all his elder brothers had. He managed to sign up as Ted Armstrong rather than Babey, so after the War (South Wales Borderers in Burma) he wasn’t able to join the Burma Star Association of veterans as he had joined under-age and with a phoney name.

Names are a curious one. My family names are Loveday and Hamper. But I have a few others as well.

My passport is William Charlie Hamper, but Wiki says it’s Steven John (names my father had added after my birth.

But my original birth certificate is William Ivy Loveday (my nan Was Ivy Beatrice Loveday and she registered my birth, so it all got mixed up and becomes quite confusing.

(Sorry, lets get back to Chris) I love the imperfection of his voice. Did he ever get embarrassed about not being able to say his ‘r’s properly?  Or did his mates take the piss?

I’m not sure if he was embarrassed. We never teased him about that but did refer to him as Quis Bwodwick.

To my mind. He should be as recognised as every bit as good a songwriter as Shane MacGowan.

I was on very friendly terms with Shane (Pogue Mahone played one of the earliest shows supporting The Milkshakes).  I think Shane had his voice and Chris his. I don’t think being famous amounts to much. Shane could just have easily remained obscure and Chris become ‘Nik Kershaw’ (thankfully he didn’t)  The Gods will have their way with hapless man.

Do you think ‘the good die young’ Billy?

That’s possible but I do know for sure that we all have to leave this physical realm at some point and do something else.

Does it seem to you that death is all around now we’ve reached our age?

Yes, I’ve seen a few pass over in the last years. Tim Webster, (local musician), Hillary Bocham (Delmonas), Dawn Grey (She of the song, Dawn Said (by The Buff Medways), my Mum of the song  Medway Wheelers.

You probably realise that I am preoccupied with death.  Over the past twenty years, I’ve lost my three close male friends: my best man, my closest mate at work, and the bloke I knew that was at the centre of the local music scene… that in addition to parents, all my uncles and aunts… It should make me appreciate life and the living more – but I’ve become more pessimistic and cynical.

I’m sorry to hear of your losses. Trust that they find peace and have only moved on to a new adventure. I saw Chris in my prayers and he was 19 years old, happy, fit and laughing.

When I was little I used to hate being forced to go and see my Nan every other Sunday. She had a constant frown and seemed to just be waiting for death. All she talked about was who was ill and who had died on her estate, which was wholly populated by the old and infirm.  I thought everyone over 65 was like that until I met my wife’s grandparents who were happy, smiling and full of life and joy.  2022 and I’m starting to turn into my Nan…

I know the feeling but don’t give in to it – learn from your wife’s mob.

Apart from my wife and son, the only place I find joy is in music and inspiration from the people that make it, the characters who do it because they have no other choice, the ‘glorious amateurs’ and driven, talented outsiders… people like you and Chris.

Well I chose the path, Chris had to make do – but he did a good job.

I’m in that position where I am upset about the death of a man I had never actually met and didn’t actually know at all…. I knew his work, his art…  BUT, because he was a ‘Facebook friend’ I’ve seen his posts and photos and there is one of him hugging his daughter after not seeing her for some time (She was away at college…) and that is such a beautiful snapshot of their relationship…

Katie is a great girl and was the light in his life. I knew her mum, Amanda, from way back as she was at college with Traci (Emin) and was her flatmate for a while. (Chris famously chucked one of Traci’s paintings in the skip when they moved because it was too big for the wall. Silly boy!)

The two songs which I assume Chris wrote the lyrics to that I’d say were his very best work are So Long, My Old China (about his dad passing on) and To A Beautiful Woman Growing Older. Do you know the ones? Everyone should hear those. There is no way Billy Childish, or whatever name he goes by today could’ve written those?

I just listened to So Long My Old China. Not heard it before. It sounds [like] a very sensitive piece. Also just listened to A Beautiful Women Growing Older, which I find a bit too saccharine for my tastes but it is certainly heartfelt.

Medway Wheelers and One more Bottle to Drink (Me and Chris and ‘Arf’ sing the latter on At The Bridge LP) are about my mother. And One More Bottle to Drink, (from the same LP) is about my father but I’m probably not quite a sentimental as Chris in either of these numbers. This could be seen as a strength or a weakness depending.

Ultimately what is good and what is bad – and what we like or don’t like – is neither here nor there. The way to judge true worth is if someone applies themselves consistently and sincerely over a lifetime. Chris did, for the love of it, so comparisons and judgments end there.

The Singing Loins and Billy Childish are on Damaged Goods Records.