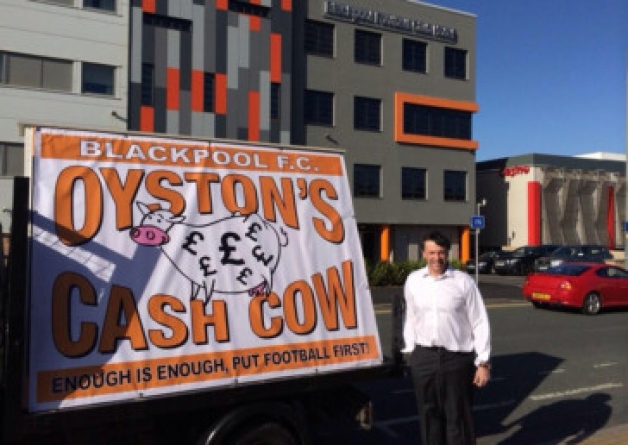 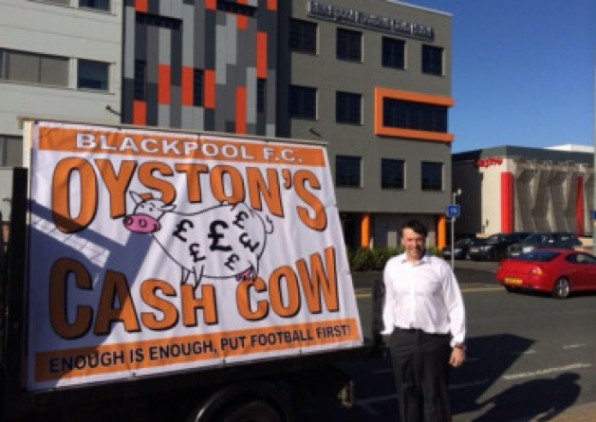 The Tangerine Knights and Blackpool Supporters Trust are pleased to confirm the following has been agreed as part of the Fans United Day. This is an opportunity not just for all Blackpool fans but football fans from all over the UK to come together and deliver our collective verdict on the Oystons ‘custodianship ‘ of our football club.

When fans expressed concern at the beginning of the season, Karl Oyston famously said, “Judge me at the end of the season.” Now it is Judgement day and it is time to let the Oystons and the nation know that we have reached a unanimous verdict – guilty.
We invite you to join us as Fans United.

Provisional Schedule:
10:30AM – Meet at Bloomfield Pub, Bloomfield Road for a coordinated march to the stadium.
10:45AM – Fan Groups from BFC and other participating clubs lead the “Fans United Oyston Out March” along Bloomfield Road past the South Stand and into Seasiders Way, along the full length of the West Stand to a congregation point close to Morty’s (Stan Mortensen) statue behind the North Stand. Fans are invited to bring banners, flags, whistle, placards to supplement those of TK and BST as we all demonstrate to Karl, Owen and the watching media what we think of the way BFC is being run.
11:05AM – Ceremonial laying of scarves/shirts/memorabilia at Morty’s statue. Fans are encouraged to lay their items with their own personal messages pinned to or endorsed to create a collage of discontent. Speeches from TK, BST.
11:10AM – Release of balloons by Young fans both Seasiders and from other clubs (subject to change)
11:15AM – Protest outside the West Stand with a musical backdrop.
12:15PM – Kick-off, the plan is for those who refuse to step foot inside Bloomfield Road to continue their protests outside the stadium
——————————————————-
All the above is being arranged in consultation with the appropriate authorities and the March will be marshalled by stewards from BST. Neither TK not BST will be organizing any protest inside the stadium. Those who choose to watch the match are of course urged to make their feelings known.

For those coming from outside the Fylde coast, there will be staging posts to greet you. Bring your club scarves, wear your club shirts, you will be made very welcome!

Full details about the day is being updated on the TK Facebook page and the Event page located from the TK page.

‘Be it about the contemptuous treatment of ordinary fans, the prejudicial attitude towards those with disabilities, the steady destruction of the reputation of the club, the dismantling of a team, the persecution of those who might oppose them including a manager, the broken promises or simply the relegation of Blackpool FC, we are asking you, who are Blackpool FC, and fellow fans of clubs from up and down the country, to return your verdict – guilty of destroying BFC.’