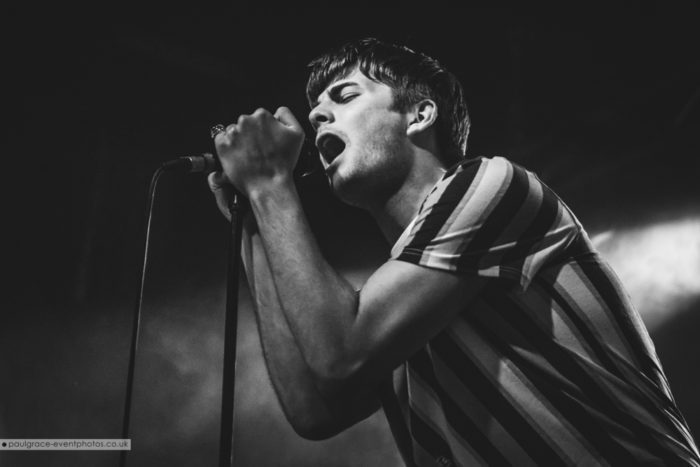 Fontaines DC hit the capital and put on a show that proves the hype is well and truly justified. Paul Grace photographs and reports for Louder Than War.

It’s been quite a week for Fontaines DC. The Irish quintet have just released their debut album, Dogrel, to rave reviews (read Tim Cooper’s review here), they’re fast approaching the end of a sell-out UK jaunt, and have made several in-store appearances along the way to promote the new release. Already today they’ve played a set in Brick Lane’s Rough Trade East, and tonight they bring their spiky Irish post-punk blast to Highbury’s Garage. Not bad for a band no one really knew anything about this time last year…

Packed to the rafters and with fans stuck outside pleading for spare tickets, the Garage is an interesting mix of mature musos and younger revellers.

As the crowd offer a deafening welcome, the boys from Dublin launch into a frenzied Hurricane Laughter; the touch-paper is lit and the room erupts as drinks and bodies go flying.

Vocalist Grian Chatten is curiously hypnotising; at times there’s an air of menacing thug, at others he’s your younger brother who needs a hug. Vocally brilliant throughout, he punches the air, while guitarist Carlos O’Connell pulls some awesome rock star shapes. 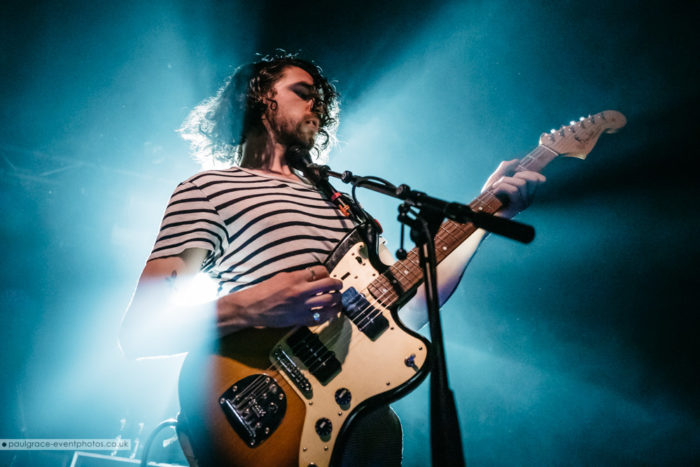 A frantic Too Real takes the roof off (but of course it does!), while last tune of the night, Big, leaves us begging for more. There is no “more” however, and there doesn’t need to be; at barely 45 minutes, the set is short, sharp and perfectly formed.

Tonight Fontaines DC put on an exhilarating performance that confirms this young band are already a force to be reckoned. They’re back in the UK in November – miss them at your peril!