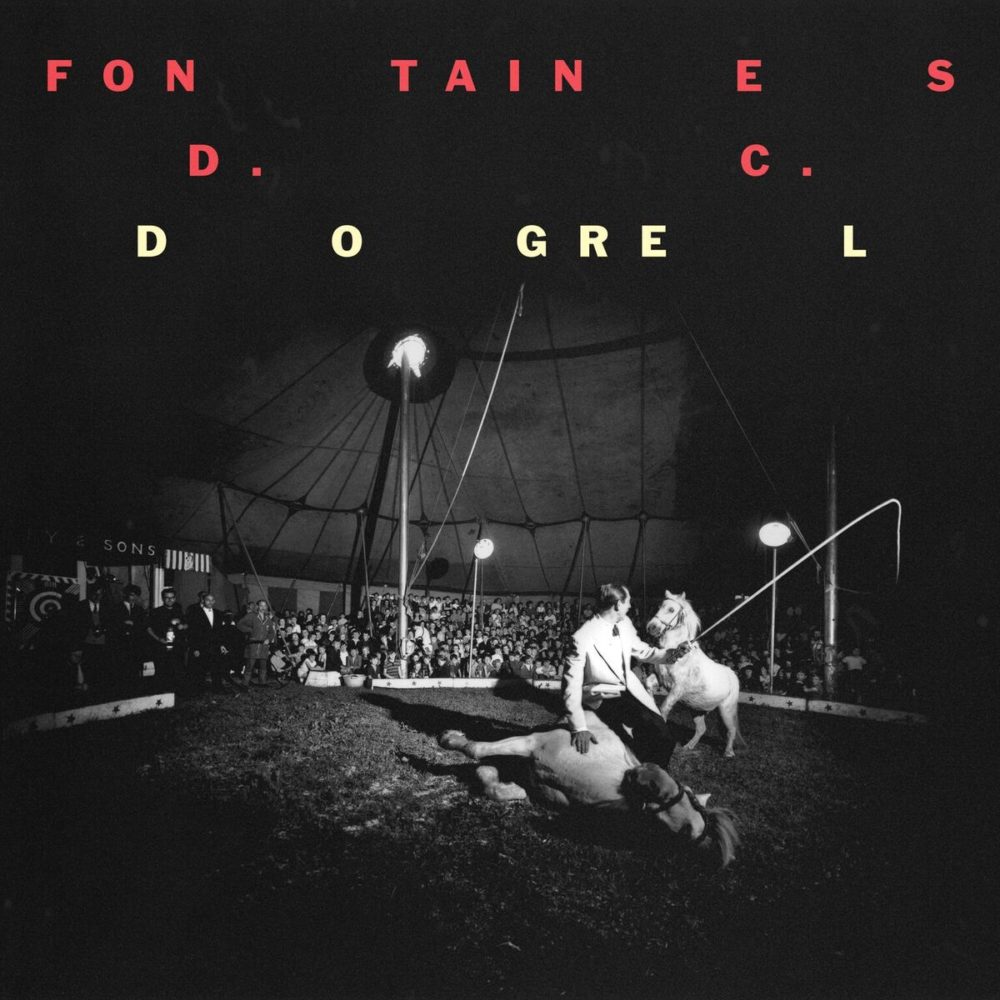 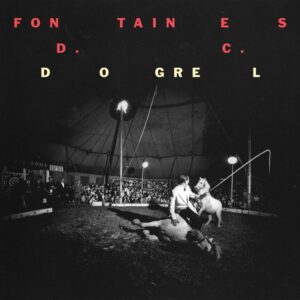 You won’t hear a better debut album this year; you might not hear a better album at all than Dogrel, the long-awaited inaugural effort by Dublin’s finest, Fontaines D.C., says Tim Cooper. (read the first ever mention of the band which was on LTW in 2015 here

“My childhood was small, but I’m gonna be big,” sings Grian Chatten over a banging, clattering backing on the opening tune of Dogrel. For once the term “long-awaited” is more than mere hype: Fontaines D.C. have been building up a huge head of steam over the past year or so, with a stream of singles – each one as good, if not better, than the last – and an almost unbroken run of live dates since leaving the studio, including a recent US tour with Idles.

Fontaines have that elusive knack of simultaneously sounding somehow familiar yet also entirely original and not actually like anyone else at all. Chatten’s unmistakeable voice (once heard, never forgotten) has the sung-spoken monotone of a Mark E Smith or a Lou Reed. While their heavily accented vocals place them instantly in their respective hometowns – Manchester and New York – Chatten sings in the strongest Dublin accent ever committed to record (including The Pogues), married to lyrics that have more in common with the Irish traditions of poetry and literature than what we normally associate with songwriting.

Every song here has lines and phrases that are testament to the power of imagination: the lyrics, often rooted in the same stream of consciousness that Joyce employed in Ulysses, are there not to tell stories – though they do that too – but to celebrate the joy of language, to paint pictures with words, to roll words around in the mouth, to use the Dublin accent to its fullest, to absorb you into the Fontaines world. It’s a world that they only began creating three years ago when the five members met at college, united by a shared love of poetry and authentic self-expression.

Musically, Fontaines are perhaps easier to categorise, the songs sometimes fleetingly referencing an aspect of something you know, without ever really sounding like it; before you’ve decided what it is, it’s gone, to be replaced by a memory, or by something else altogether. You’d probably call them punk if you were trying to find a label but they’re not punk in the same way as Idles or Slaves or Touts, even though at times their guitars slash and their drums pound in a not entirely dissimilar way. And they’re not really post-punk except that they are, exactly, precisely, definitely that – just not in the way you’re expecting.

They don’t declaim angrily, pushing buttons to ignite fury; they don’t mouth platitudes to earn fist-pumping salutes from the easily pleased: these songs, rooted in the romance of the Irish experience – misery and melancholia, resilience and resistance – create an impressionist portrait of their hometown. Fontaines could not come from anywhere except Dublin, even without the accent. They’re the musical equivalent of a perfect pint of Guinness, their songs drawn, like all great art, from the world around them, enhanced by the imagination of the people creating them. Authenticity is the key. 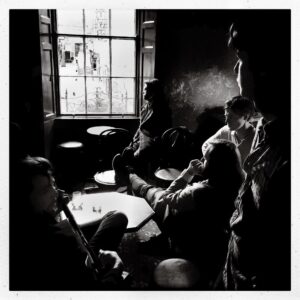 Sha Sha Sha, a song that, like so many here, seems to have been composed specifically for a raucous singalong, its thumping rhythm tailor-made for fist pumping, head-shaking and wild abandon, continues the minimalist ethic of Big, its rambunctious backing giving way to a twangy guitar figure that comes in to add an almost-country flavour. As for the lyrics: “Two men on a rickshaw pumping up a tyre / Tyre and tyre and tyre and tyre…”  might not make immediate sense, but it’s an image you won’t forget in a hurry.

If there’s a criticism of Dogrel, it’s only that six of its 11 tracks have already been released, but when they’re as good as these, who’s complaining? It would be disappointing not to include songs like Too Real, with its urgent strum and melodic riff (briefly recalling Martha & The Muffins’ Echo Beach) before the bass comes rolling in like an old friend staggering home from the pub and Chatten lets out an exasperated howl of anguish: “Aaaaargh…” Guitars squeal from speaker to speaker and the sibilance of the cymbals creates a chaotic noise over which Chatten inquires, conversationally and insistently: “Is it too real for ya?”

Somewhere deep in the song, after the bit that sounds like Bono freestyling over those Joshua Tree songs at stadium gigs – “Six o’clock, six o’clock” – making you wonder whether it’s a deliberate reference (11 O’Clock Tick Tock) or just a coincidence before you remember that these boys weren’t even born when U2 put Dublin on the musical map for their mums’ and dads’ generation, there’s a lyric where he sings: “As it stands, I’m about to make a lot of money.”
It’s hard to argue with that but don’t take it literallyl: as he will go on to remind us in Chequeless Reckless: “Money is the sandpit of the soul.”

The newer songs show that Fontaines are already developing their sound: mid-tempo numbers like The Lotts and the tuneful Television Screen display a bruised melancholia and a new confidence that points to the future: where once the two guitars of Conors Curley and Carlos O’Connell fought for supremacy, now they blend harmoniously. Roy’s Tune is a wistful, melancholic ode to perseverance in the face of adversity, in which Chatten’s lyrics are at their most traditionally poetic, with old-fashioned values like rhyme and meter and scansion. “I was a cool cool kid on the kerbside scene / And the lights in my eyes were evergreen / Like you’ve never seen.” If you haven’t seen the heartbreaking monochrome video, then do: it’s hard to watch without a tear coming to the eye as you watch the young couple struggling to survive while Chatten soundtracks their lives with poignant observations: “I like the way they treat you / But I hate the way they use her”.

Then there are the crowd favourites, those songs that have already embedded themselves in the Fontaines’ embryonic legacy. Nearly five minutes of Hurricane Laughter, with the relentless rhythm of Conor Deegan and Tom Coll and the guitars going off like sirens and its surrealistic but inspiring chorus (“Hurricane laughter / Tearing down the plaster”) and its endless refrain: “There is no connection available.” Liberty Belle is another old favourite, the oldest of them all (it was the first single in May 2017): an epitaph for one of Dublin’s oldest neighbourhoods The Liberties, now facing the inevitable onslaught of gentrification. “You know I love that violence that you get around here,” sings Chatten, capturing the sour-sweet taste of the authentic Dublin that the bulldozers and EU subsidies (remember them?!) are sweeping away.

Boys In The Better Land, another of those early singles from last year, condensing the emigrant experience and the last 100 years of Irish history into its sharp-edged lyrics (“Driver’s got names to fill two double barrels / He spits out ‘Brits Out’, only smokes Carroll’s / Now we’re refreshing the world in mind, body and spirit”) while Chequeless Reckless starts off sounding like The Sex Pistols at their rough and raucous best and delivers the band’s manifesto (“A sellout is someone who becomes a hypocrite in the name of money”), before concluding with an inquiry that serves as an existential question for our troubled times, Chatten repeating: “What’s really going on?”

It comes to a close with the mournful strum of Dublin City Sky, which sounds like Shane McGowan at his most maudlin (“I was down the bottom half of some auld bar in Chinatown”): the sort of drinking song that you might begin before forgetting the words and slumping into that last ill-advised glass of whiskey of the night. The Irish Times totally nailed it when it came to summing up the themes of Dogrel, with an insight which many people over here may be unaware of: “As Britain flushes itself down the toilet, Ireland has been extolled as some kind of progressive utopia in the wake of recent referendums. The stark reality is that the Fontaines DC generation are adrift in a hyper-capitalist playground of extortionate rents and shameful levels of homelessness, and governed by a political elite who are chronically addicted to optics and spin. Dogrel taps into Dublin’s rich humour and character. It is a cracking debut that attempts to reclaim the city’s soul.”

Like the record itself, it’s hard to improve on that. Unless it’s too real for ya.

All words by Tim Cooper. You can find more of Tim’s writing on Louder Than War at his author’s archive. He is also on Twitter as @TimCooperES.  Band photo by Richard Dumas.