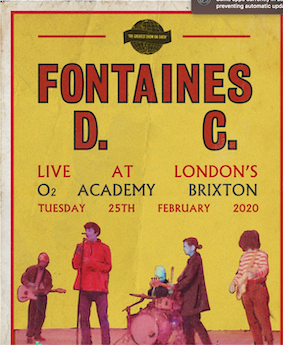 First written about on Louder Than War in 2015 (we nearly released their debut single at the same time!) Fontaines DC have announced their biggest show to date.

Following the release of their critically acclaimed debut album ‘Dogrel’ (which charted at #9 in the UK album chart, and landed them a Mercury Prize Nomination), as well as a sold out US tour with labelmates IDLES, an electrifying performance on The Tonight Show with Jimmy Fallon, a mind-blowing Glastonbury 2019 performance, and yet another BBC 6 Music A listing for their fan-favourite single ‘Boys In The Better Land’; Fontaines D.C. are making their mark.

Today, the band continue their rapid upward trajectory with the announcement of their biggest headline show to date at London’s O2 Academy, Brixton on Tuesday 25th February 2020.