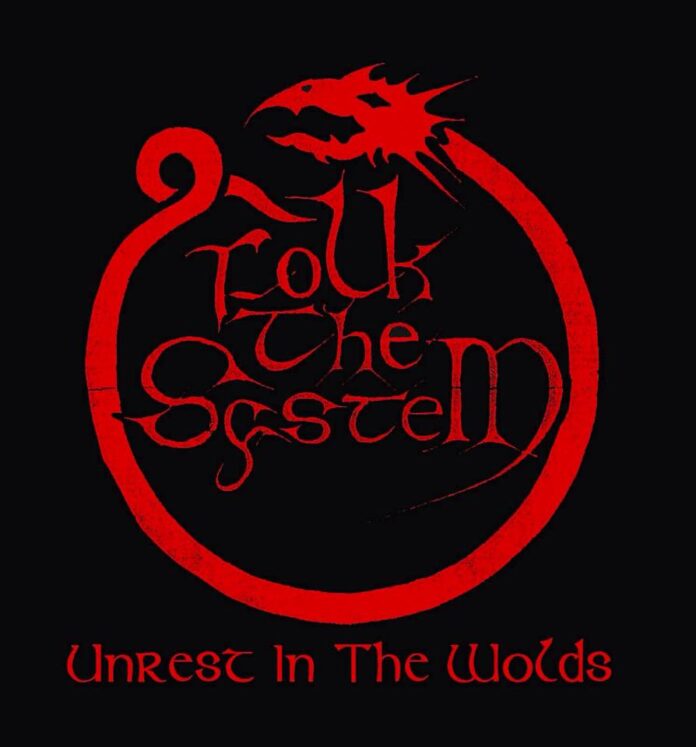 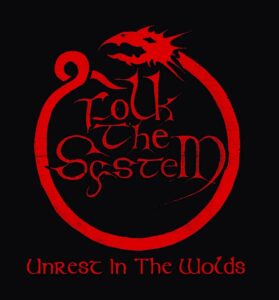 ‘The Wolds’ is a term used, here in England, to describe a range of low hills; peaceful, charming and full of character, images of which decorate chocolate boxes and the like…a term that invokes feelings of calm and tranquillity – there is nothing calm or tranquil about ‘Unrest In The Wolds’ the debut album from Banbury based Folk The System, this is a genuine fire-band release that combines snarling vocals, a frantic fiddle battling with pushed to the limit acoustic guitar, the entire shebang being held together by a hammered Bodhran and bass…

Initially formed in the early 1990’s Folk The Systems politically charged lyrics and energised live performances saw them gain supports with the likes of Citizen Fish and Blyth Power, tours across the country followed, but the lack of a plan, or more accurately a lack of restraint limited Folk The System to recording just two 4trk demo’s prior to their split in the late 90’s.

Raw Folk Punk From The Shires

The five piece Tony Partner (Guitar), Simon Hill (Vocal, Guitar, Tin Whistle), Maty Tustian (Bodhran, Drums, Vocals),John Tims (Fiddle, Mandolin), Johnny Fell (Bass) remained friends, so when in late 2013 Simon Hill bought a new 12 string and sent word to his troops that the music world needed another blast of Folk The System, no-one argued. The resulting ‘Unrest in the Wolds’ is a brand new recording bringing together the lost demos with some new and unreleased material; despite the years that have past the targets of Folk The Systems unrest remain firmly entrenched…

‘Witchfinder General’ with its lilting expansive opening initially throws you off balance, before Hill spits out “2, 3, 4” and delivers a measured rage taking aim at the state of UK Social Services, the recording, across the entire album is raw though don’t let that put you off…’Lost Land’ is a powerhouse of full on mayhem, this is not folk music, this is pure full frontal punk played upon savaged acoustic instruments, there is no respect for the nuances of a Bodhran – Maty Tustian just hits hit harder and faster! That’s not to suggest that Folk The System substitute song-writing ability with blistering pace; ‘Death Of A Nation’ is a wonderfully crafted song, a wall of sound and vitriolic “contempt and hate” whilst ‘Environmentally Friendly’ demands that you “open up your eyes and take a look around’ the song weaving between almost spoken word and a rage like thunder…the Bodhran powers on matching the power and passion that fiddle is igniting!!

‘Murphy’s Logic’ is possibly the most traditional ‘folk’ track, an instrumental, bar for the yelps that Hill throws in for good measure, the fiddle and tin whistle refrain would not be out of place amongst the beard stroking rows present at the Radio 2 Folk Awards, ‘Street Corner People’ borrows from The Adverts ‘Gary Gilmores Eyes’ – no bad thing particularly considering TV Smith’ own incendiary acoustic deliveries these days.

‘Folk The System’ have created a dangerously infectious album, yes it would benefit from decent production, but that’s not what they are about, ‘Unrest In The Wolds’ is a reaction to the times, a voice that needs to be heard above the din of spun politics, and the homogenised shite that occupies the radio channels, and for that reason I suggest you go and buy this album.