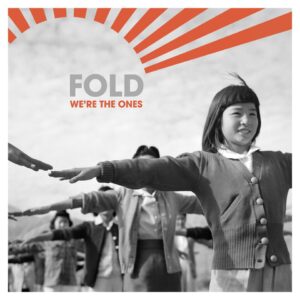 Fold: We’re The Ones

Leeds’ socially conscious quartet Fold release their much anticipated follow up to 2015’s self-titled debut album today. Simon Tucker finds a band in rude health and continuing on a path that demands admiration.

It’s easier to keep quiet and just get on with your life…they say. It’s easier to avoid the news and social media…they say. Just focus on yourself…they say. Protection is key. We’re all just trying to get to the finish line in one piece leaving behind a legacy that is to be remembered fondly. But what if you can’t just let things go? What happens if within yourself lies the soul of someone who cannot be comfortable allowing injustices to go unchecked? Well, for this type of person the options are easy. You get educated, get vocal, get active and you use whatever skills set you personally have to help make a difference and like so many others, Leeds’ Fold use the medium of music to help invoke positive change. A Fold release is like a school you actually enjoy attending. Theirs is a music that feeds the mind without once forgetting the important fact that the music also needs to move and groove. Aligning the brain back with the feet.

It’s been four years since we’ve had a full length album from Fold and two from their ‘Written In The Sky’ EP so there can be a niggling worry when starting your copy of We’re The Ones that the band may have lost momentum….this doubt is cast aside as soon as first track proper ‘We’re The Ones’ emerges. ‘We’re The Ones’ instantly settles into a familiar Fold swing groove and allows for their hazy-at-the-edges production to smoke trail its way around you. ‘We’re The Ones’ features London-based MC & spoken word activist Potent Whisper whose words push forward a positivity and enable a listener to feel motivated to get active. A love song that’s universal and a cracking start.

What is apparent with this new album is that the members of Fold (Sam (guitar), Kane (drums), Ben (bass) and Seth) have really honed their skills and improved their musicianship and songcraft. Each song is structured in a way that allows a flow throughout the record. No jagged changes or sharp turns which is what one needs from a Fold album. Another part of ‘We’re The Ones’ appeal is the bands use of collaborators. Each one brings a distinct style to their relevant piece, whether that be Natalie Davies’ poetry on the diamond soul track Stand Up (which also contains some of the most beautiful guitar work by the band to date) or the wonderfully observed anti knife crime piece Living On A Knife’s Edge in which Mr Gee manages to twist the narrative from an elder talking to a young person into a speech on how we adults must also keep educating ourselves to understand the different life our youth are living to us and the similarities we can use to connect with them.

‘We’re The Ones’ is a classically structured album in the way that the band have sequenced the tracks so that it (the album) gets heavier in beat as you approach its centre with the MC/Beatboxing MotorMouF featuring Stronger Than The Evils and the following The Storm both delivering some of the finest breakbeat/hip-hop moments the band have made to date.

Fold close their latest album with the one-two punch of Choose Love, which takes the essence of Screamadelica and mixes it with the DNA of 2019 and All Waken Finally To Being Human which glistens and bubbles only allowing a few moments of beat driven abandon to enter stage left, play with us, then exit stage right.

‘We’re The Ones’ has been worth the wait. It is an album that delivers on every expectation you have of a Fold release and shows distinct evolution by its creators. It is a clarion call for positive action without laying back on lazy sloganeering. There is an intelligence here that inspires in the listener a thirst to find out more about the sampled people on the album. ‘We’re The Ones’ is an album sun drenched and glistening. It lifts the mood and feeds the brain. No one involved in its creation phone it in and with the way the album has been mixed and produced you get a clearer sense of what each member contributes to the Fold sound. Buying ‘We’re The Ones’ will not only improve your own life but if you take its message to your heart and step off the sidelines and into the action then it will help you improve other peoples lives as well and right now we really really need you. There is no better way to sign off this review than with the words of the band themselves:

“This album is dedicated to those who care about others.”