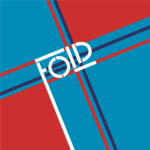 Leeds quartet Fold release their highly anticipated debut self-titled album on the 2nd of November. Simon Tucker gave it a listen for LTW and gave us these thoughts.

Politics and music shouldn’t mix is the view quite a large number of people seem to share these days. As soon as an artist sticks their neck out and supports a cause, they are often derided or branded “champagne socialists” (these people who say these things often have Beatles, Stones, and Dylan albums in their collections somewhat ironically). Look at the wrath that has been aimed at Charlotte Church in recent months and you’ll get the idea. Then there are the rest of us. Those who think now, more than ever, is the time for artists to be speaking out. To be nailing their flags to a cause. To be giving voice to those of us without a platform. There ARE bands out there doing this and it’s not just through their music. Bands like Young Fathers and Sleaford Mods are highly emotive, voicing their dissent not just in their music but in how they conduct their personal and professional lives. Then there’s the more established artists like Massive Attack, Geoff Barrow, and Thom Yorke who have long been champions of certain causes and are highly vocal on social media. So there IS a desire out there for social awareness and political dissent and into this frame steps Fold. A mix of the electronic and live, Fold create a brand of music that is soulful and full of heart, compassion, and concise anger aimed at the injustices they see in the world often using vocal samples of icons passed (John Lennon, Martin Luther King, JFK) to make the message clear.

What is remarkable about ‘Fold’ is that even though it is full of polemic, it is actually full of hooks and groove that make this the most danceable protest record since There’s A Riot Going On.

A Reflection Of Us All is a laidback groove that slides along lulling you into the world, making your mind susceptible to the ideas and ideals that the band are going to be presenting before A Victim’s Mentality skitters around on dark-shaded, smoky jazz fills and thrills.

Detroit Red is where the album starts throwing its weight around with a slam/bam (thank you mam) break-beat that really shakes the bones and the dust from the media saturated eyes before Mr President, We’re In Trouble seeps in sweet soul and lounge beat.

The mixture of soulful electronics and jazz (with an added hip-hop pulse) continues throughout the rest of the album with tracks like She, the mighty Oil-Powered Machine, and Two Past Midnight being the finest examples.

Fold is a wonderful and thought provoking listen. It brings to mind Aim’s Cold Water Music in its blend of beauty and grit. The production throughout adds a rich feel which is all encompassing. The album never tires or sags keeping everything crisp and fresh. You can approach this record in two ways. You can either a) just enjoy it as a piece of music perfect for the dancefloor or b) let the music wash over and educate you at the same time. Like most great art, Fold is full of lessons for us all but never heavy handed or righteous. It is a groove, a sensation, a news broadcast worth listening to with no shadowy figure directing the content.