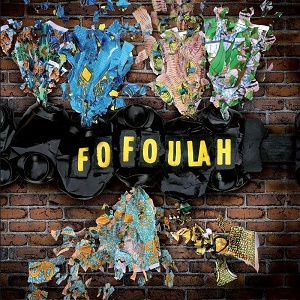 Maybe it’s early exposure to T.Rex and John Kongos, or the bombardment of The Glitter Band and Sweet. It could also be Adam And The Ants, but I’ve always loved percussion, Burundi beats in particular. The constant, effervescent pounding on skin has always resonated with me. I put my current enjoyment of African and South American music down to that varied past.

I mention that because Fofoulah, the London based six-piece now give us an eponymously entitled album with huge slabs of superb drum beats throughout. Using the beats as a backdrop to added afro, electro and dub, the album is a fascinating cacophony which has to be heard to be believed.

There’s no warning as to what is coming as No Troubles sets the benchmark from the beginning. Frenetic beats, chants and brash keyboards and saxophone are combined to wonderful effect. Not only are Fofoulah a multi-cultural group but their style is also a mish-mash of East and West African styles (quite different to the discerning listener). When mixed with polyrhythmic Sabar drums samples and horns it becomes quite formidable.

Even on slow-burners like Make Good, with its hypnotic formation you can’t but be impressed. Largely instrumental the album does contain some absolute gems when vocalised including the superb Don’t’ Let Your Mind Unravel Safe Travels (featuring Ghostpoet), a quite stunning track where Faithless meets Gil Scott-Heron over an African beat. There are some fantastic dubs thrown in too and the track is easy and lazy. Contender for album track of the year without any doubt.

The Clean Up throws in a little funk and jazz with a more traditional twist. The band are unique, and that’s refreshing as they introduce a music which is becoming more and more popular with a modern twist and more westernised sounds. Fofoulah is a surprise, not only because of the way it approaches mixes of unusual combinations, but also because the fusion actually works.