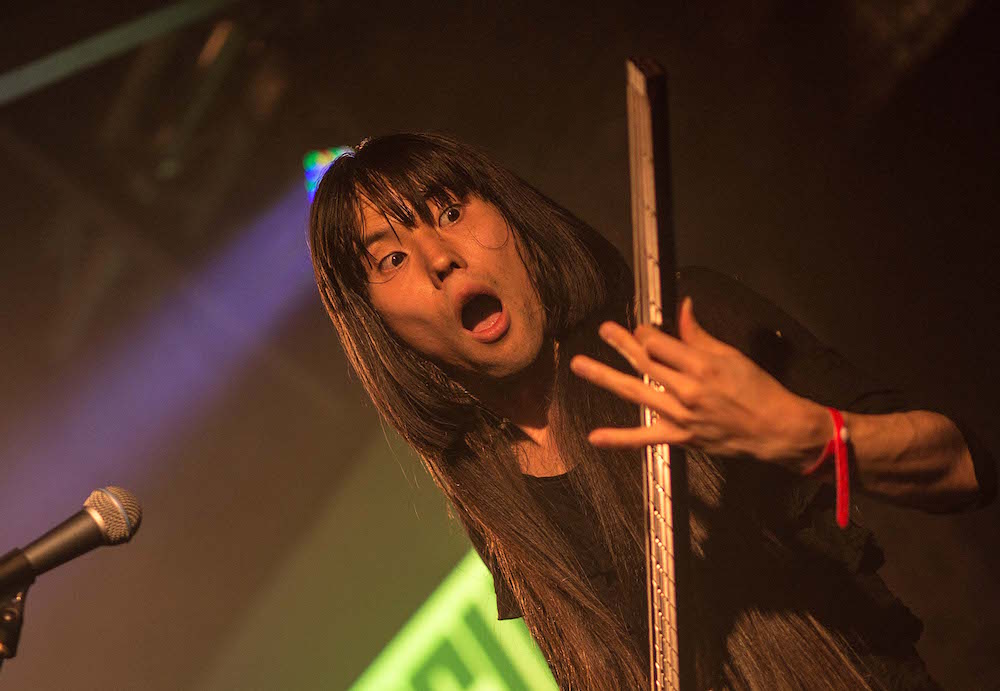 We look back at two more brilliant days as Focus Wales which climaxed with stunning Bo Ningen performance. Our day 1 review is here, day 2 here.

After the scene dies; never an easy time as stages are dismantled and the mundane reality of life returns but what memories Focus Wales 2015 left us with.

Friday evening kicked off with Wrexham’s mellow maestros Heal the Last Stand in St Giles’ Parish Church who’s brand of uplifting, West Coast Folk never fails to inspire. Following them was an outstanding set from Yucatan, the Welsh language combo purveying dreamy soundscapes before it was time to dash uptown to catch a couple of the Horizons 2015 bands in 3B.

HMS Morris delivered a sublime stripped back set and Cut Ribbons, the Llanelli outfit with huge potential and an album due for release this year that promises great things. Following on was Hannah Grace and this provided one of the jaw-dropping moments of the weekend. Quite simply I was gobsmacked! Previous to this I would say the best female vocalist I have enjoyed live would be Nina Persson, but I think Miss Grace from Bridgend has just stolen that honour. A subtle blend of Jazz and Soul, backed by a single guitar saw her voice effortlessly soar beyond the norm and, just when you thought “wow”, it flew off beyond comprehension. I know nothing of what the popular music scene requires for success, but if it’s talent then rest assured you will hear a lot more of Hannah Grace.

The Mexican Walking Fish, with their irresistible country tinged folk-rock which is spiced by a Mariachi type trumpet, provided the perfect mid-evening pick-me-up. Canadian visitors HIGHS were a real find with their well-crafted harmonies and song structures. Meanwhile, Leeds grunge-rockers Allusondrugs  were crashing the riffs round the walls at South and going down a storm with a sizeable gathering that were lapping it up. Eagulls look to have it all and proved that beyond doubt in a superb tour de force at a bouncing Central Station and hopefully we will see them back again soon. This was a great climax to an evening of varied but outstanding music.

Saturday promised much and delivered even more. An afternoon at 3B saw Youtube guitar sensation Gareth Evans deliver a masterclass before Sera, a recent artist of the week on Radio Wales performed tracks from her Dream Catcher album and newer material which sounded very promising. Little Arrow rounded things off for the afternoon and this Pembrokeshire collective, now 3 albums into their career are always worth watching. It’s folk that isn’t folk and inhabits anthemic rock without actually being that either. As you may have gathered, the sound is difficult to categorise as it’s pretty individual and a live performance is equally as fascinating.

Early doors in Central Station saw a full performance from HMS Morris and Wrexham’s own Baby Brave and their glorious pop offerings that shimmer through just the right levels of distortion. From here it was a quick dash to South for the final time to enjoy Kerrang favourites Straight Jacket Legends in a blistering set that left us anticipating their forthcoming debut album.

Bo Ningen played the final set at Central Station and what an experience that was. The London-based Japanese four-piece had the entire venue entranced as they stormed through a mind-blowing performance as if their lives depended on it. Musically and visually it is like Ramones meet Sabbath meet Hawkwind and then deciding to break rules that we weren’t aware even existed until we see them trashed. Thunderous drums set the pace of riffs that hurtle at you and back again before you realise and the fretless bass of Taigan Kawabe, when it’s not driving the incessant attack, is used almost as a wand to bend the dancing crowd to his will. This is guitar music taken to the ultimate, with time sequences that drive and slow like an express train, with four long -haired drivers who somehow manage to keep the engine on track despite frequently defying the laws of gravity. This is, in short the primal urge that every music fan needs to satisfy, whether they realise it or not. It is an experience and, as the lady wife remarked on leaving the venue, unlikely to spawn too many tribute acts. Bo Ningen are brilliantly unique and a perfect way to end what has been an outstanding 4 day experience.