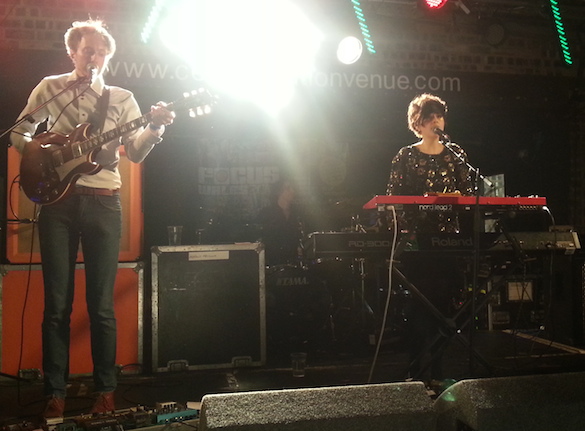 Things are really warming up in the fair parish as Louder Than War report from the thick of the action of Focus Wales.

The second day kicked off with more conferences interspersed with live music and a showcase performance from Pembrokeshire’s Little Arrow displayed again how they approach the creation of a great sound from an occasionally unexpected, but highly listenable route.

The evening kicked off with the hugely promising Prestatyn and Rhyl based four-piece Cold Committee. Displaying huge energy and an ear for a good melody, their debut EP is out soon and is one to look forward to. This is followed by a refreshing dose of folk from The Glendale Family, a group with connections in Edinburgh and closer to North Wales and who have a strong record of live performances in a range of venues, including busking to monster-spotters on Loch Ness! HMS Morris in The Bank offered something slightly more psychedelic and songs that are well constructed and delivered with a feel-good factor, but also a hint of mystery. Meanwhile, across the road in South Empire of Thieves, a local three-piece were kicking up a power-packed racket in an energy drenched performance.

The Bank was showcasing some Nordic acts tonight and Jimmy Traskelin offered a combination of traditional Finnish music, American folk and blues and harmonica. There was also a personal first ever spotting of a Kantele, the national instrument of Finland being played. This was to be utilised again later by Kardemimmit, a Finnish folk group. 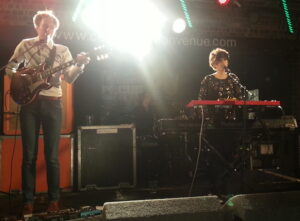 Central Station was the venue for Golden Fable’s (see photo right) performance and this was certainly one of the highlights of many great performances so far. Delivering some new material alongside classics like Sugarloaf and Always Golden, the forthcoming new album is already hugely anticipated. Following this, Obelisks launched into their nihilistic, electronic riff collision with a sound big enough to fill a room much larger.

To change the mood a little we’ve been posted down the church – St Giles’ to be precise, and a particularly rammed version of it. The reason for the size of the congregation was former Gorky’s Zygotic Mynki frontman, Euros Childs hotly anticipated appearance. He delivered a set of clever and often irresistible songs on piano with lyrical content that ranged from the impact of holiday homes to haunted houses. A brilliant performance.

Houdini Dax delivered a set that demonstrated a welding of power to melody, but laced with just the right amount of attitude. However time was ticking by and we were nearing the stage time of Wrexham legends Terminal. To understand the importance of Terminal, you need to understand Wrexham itself. Thirty plus years ago, with a few honourable exceptions, there wasn’t a regular live scene in the town, certainly nothing that even remotely compares with today. The chance to see 150 live bands over three days is riches beyond some of our dreams; we’d have jumped at one new band a month in the early ’80s and the organisers of Focus Wales, who also work hard for the rest of the year along with some other dedicated local promoters, have made more improvements to the town than any politician in my time.

Terminal worked harder in their day than many of their contemporaries who had less to offer but got so much further. We will never know how far one lucky break could have taken them but, like many other bands around the country, they got on with the business of life and are now back delivering their blistering live set. So in the Commercial, when the great Phil Heym gazes across the room from his table-top vantage point like a general surveying his troops, he knows and we know that Terminal will always matter in this town.

From this welcome blast from the past, we were just in time to catch the end of Sweden’s I’m Kingfisher in what was now a packed The Bank and the night was really warming up. Back in Central Station we were confronted by the brilliant The Earth. Suddenly, in the words of Blake, “I see the Past, Present and Future all at once” as this union of ex-Catatonia and Super Furry Animals is brilliantly animated by the dynamic stage presence of Dionne Bennett. I would expect to hear a lot more from this four piece.

By The Sea had made the short trip down from Wirral to deliver some well-crafted, guitar based melodies that showed real quality. South Wales’ Islet rounded off Day Two in a pretty unique fashion with some brilliantly unpredictable harmonies and structures and a compelling stage presence. (Full review of Islet’s set here.)

But as Homer (also a Wrexham fan) would have it, “there is a time for many words, and there is also a time for sleep” and with that we bid farewell to Day Two in this wonderful parish of pleasure.

Focus Wales continues tomorrow. You can find the festival online here: focuswales.com. They’re also on Facebook and they tweet as @focuswales.

All words by Dave Jennings whose Louder Than War author’s archive can be found here.