Home Music Reviews Album Reviews Foals: Everything Not Saved Will Be Lost (Part One) – album review 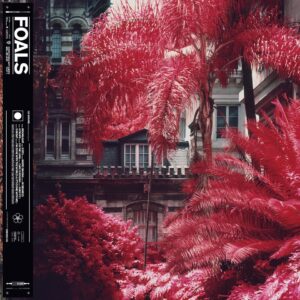 Everything Not Saved Will Be Lost

Ever since their emergence in the late Noughties, Foals have long been an intriguing proposition. As likely to please as they are to frustrate, they are a band perennially regarded as a great “prospect”. Ever since their debut album “Antidotes” – a math-rock infused indie romp, loaded with naiveté but also undeniable promise – Foals have habitually appeared to be on the cusp of genuine artistic greatness. If only they could be free of the shackles of commercial concern and throw themselves headlong into untethered, psychedelic experimentation.

Foals displayed their capacity for growth with their sophomore album “Total Life Forever”. Tracks such as the monumental, sombre “Spanish Sahara” and the subtly downbeat “Miami”, the band exhibited their capability for mature, artistically meritable material. The follow-up efforts, “Holy Fire” and “What Went Down”, were some of their most commercially successful to date, yet musically the albums felt like lateral moves for the band. With their latest offering “Everything Not Saved Will Be Lost” announced as a double-album, it was conceivable to believe that perhaps this was the album where they cross that threshold into experimentation – from an OK Computer to a Kid A, commercial success to critical acclaim.

“Everything Not Saved Will Be Lost” bares all the hallmarks of a vintage Foals album, with their mastery of textures and tones being the linchpins that hold the majority of tracks together. Consistently throughout their career Foals have had an uncanny knack of knowing when to add and remove different sounds to manipulate the dynamics of their songs. It’s a skill that is particularly evident on stand-out track “In Degrees”, a song that relies utterly on its driven, groove bass-line, but is given life by the accompanying, nonchalant synths and sparsely plucked guitars. It is groove that provides many of the albums highlights, with lead single “Exits” being anchored by a composed, strutting beat which harks vaguely back to Parliament/Funkadelic.

As usual with any Foals album, the production is impeccable throughout, with each instrument sounding rich and tasteful. It is obvious that a lot of time, patience and care goes into the tones of the songs. With that said, there are a few things left to be desired. The vocals of frontman Yannis Phillipakis, always coated in a thick reverb, sometimes become indistinct and purposeless, detracting from some of the albums heavier moments like the bruising “Syrups”, which could have benefited from more fired-up and energetic performances.

It is difficult to say that “Everything Not Saved Will Be Lost” is a bad album, because, by and large, it is not. It is a fairly solid album, with a number of tracks that Foals fans will remember for years to come. Yet, it is also difficult not to feel a slight tinge of disappoint. The album suffers from a creeping lack of focus, with tracks such as “Cafe D’Athens”, “On the Luna” and “I’m Done with the World (& It’s Done with Me”) – whilst sounding lush and competent –  being ultimately forgettable.

Do not come into this album expecting Foals to push themselves and break boundaries. There is plenty here for Foals fans to enjoy, but otherwise it is a relatively run-of-the-mill affair, with the album offering no new twists or turns to their tried-and-tested formula.

All words by Sam Morrison. You can find more of his work here.