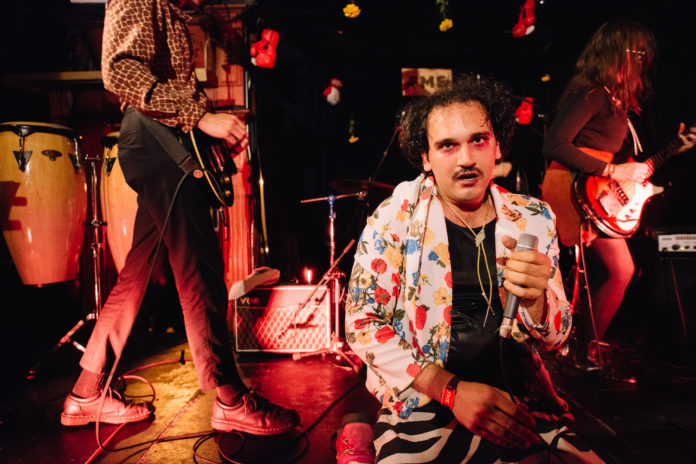 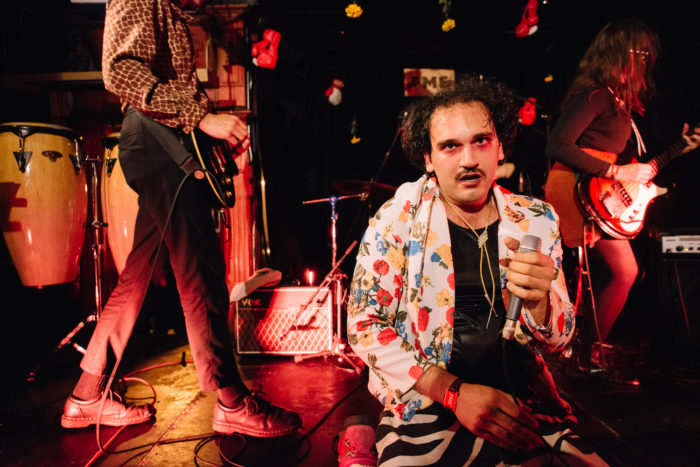 Since 2003, the city of Rouyn-Noranda, Quebec has provided an idyllic setting for the FME (Festival of Emerging Music). Surrounded by generous green space, shimmering blue lakes, and yellow smoke belching copper factories, its population of 42,000 swells in size as summer comes to a close. Drawing in attendees from across the French Canadian province, alongside international artists, media, and industry envoys keeping their party going, FME offers an annual crash course in the vibrant Quebecois musical culture.

Even for someone like myself who takes pride in paying attention to the musical happenings of our vast nation, visiting this four-day event is a wake-up call. Within minutes of arriving, it becomes clear that Quebec is operating on a completely different level than the rest of Canada. With FME’s efforts to spotlight Francophone names largely unknown outside of their home province, the talent on display in all genres is astonishing. From main stage pop headliners like Jeanne Added to Polaris Prize shortlisted jazz singer Dominique Fils-Aimé or frenzied noise-punk trio Victime, this bubbling pool of artists should be recognized on an international level.

2019 marked my second year joining a motley crew of writers and photographers from Toronto on a 10-seater prop plane chartered by the Festival. FME’s hospitality is second to none, so I jumped at the chance to return to Rouyn. Oysters, brisket, and bottomless gin fizzes were just a few of the perks. Of course, I was here to see music as my main form of binging, and FME delivered a buffet.

While rain threatened to wash out opening night, this failed to scare away the mob of fans gathered outside the festival’s main stage. Jeanne Added rocked the crowd with a mesmerizing voice like Imogen Heap and breakdancing moves like a robotic Robyn. As her band of double drummers propelled the songs over thumping electronic beats and emotionally charged synth-pop hooks, the Gohan-haired singer had youngsters and oldsters bobbing along.

Kid Koala was another returning headliner to FME, yet the goofy gimmicks of this year’s Vinyl Vaudeville show sadly distracted from his turntable mastery. While he had no problem pumping things up with scratched remixes of Daft Punk, Slayer, and Hudson Mohawke, the acts joining him onstage paled in comparison. New York’s Adira Amram led a trio of dancers, first dressed in ‘80s workout gear before stripping down to burlesque feather boas. Unfortunately, her shouted raps sounded like your aunt drunk on wine coolers grabbing the mic to freestyle at a wedding.

As the rainstorm continued, I ducked inside Cabaret de la Dernière Chance, a bar that would provide the highlights of the festival for the next three nights. Ellemetue, the duo of Nunu Métal and Mingo L’indien (best known for his abrasive early 2000s electro-punk project, Les Georges Leningrad) held the packed crowd in the palms of their hands. As Nunu stalked the stage with whispered coos layered over menacing minimal wave, Mingo shook out his ponytail while ripping sleazy solos on guitar and clarinet. Oozing with the eerie sexuality of Greek electronic artist Lena Platonos and the raw power of Southern junk-punk duo Buck Gooter, they were transfixing. 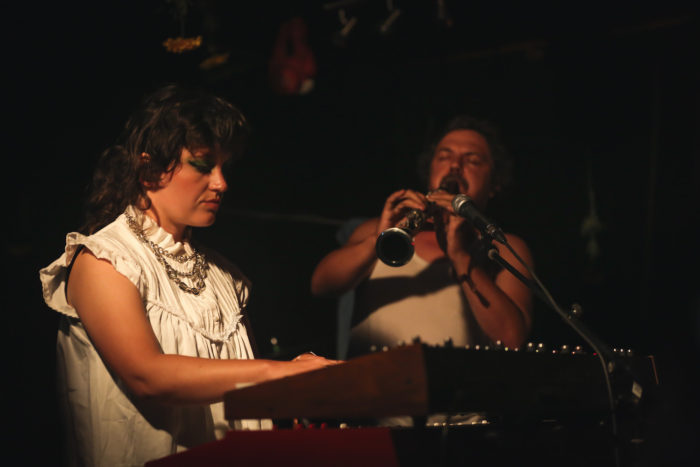 Night one concluded on another high note with Switzerland’s industrial rock heroes Young Gods. Since their formation in 1985, the group have earned supporters such as NIN and David Bowie, alongside finding a significant fan base in Quebec with their French language vocals. Throughout an hour-long set spanning the greatest hits of their discography, Young Gods blasted the small yet devoted crowd with shredding guitar riffs, hypnotic polyrhythms, and proto-Prodigy fire-starting beats.

Day two began at a far slower pace with the soothing neo-tropicalia of Sessa. Surrounded by families enjoying their meals at the restaurant venue L’Abstracto, the Brazilian singer/guitarist was joined by a tumbling percussionist and a trio of angelic backing vocalists. Touring in support of his latest album, Grandeza, produced by Yonatan Gat, Sessa showed off his six-string skills with frenetic solos, hair whips, and a bashful tooth-flashing grin. 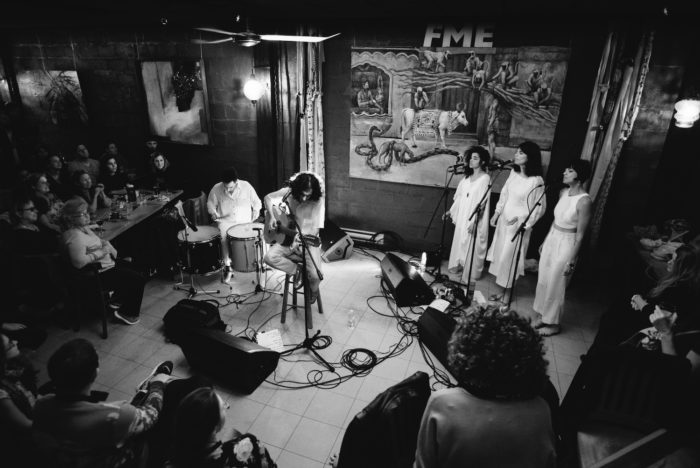 The night’s most popular main stage act was hip-hop artist Loud, who whipped the crowd into a stupor with the laid-back swagger of a Francophone Post Malone. Yet in this writer’s humble opinion, Switzerland’s KT Gorique outclassed him with ease. With dreadlocks swinging in front of her bug-eyed smile, the Kunta Kita MC brought the speedy flow of André 3000 and fierceness of Haviah Mighty to a set of socially conscious party rap anthems. 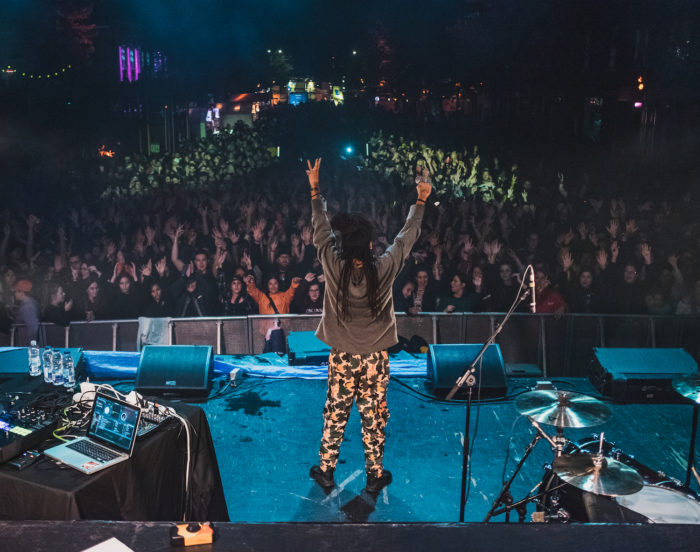 Japan’s 5.6.7.8’s have been blasting out retro-style rock ‘n’ roll since the late 1980s, catching a major wave with their song Woo Hoo featured in Kill Bill. It’s been 16 years since that film was a relevant piece of pop culture, so their two-night residency at FME 2019 felt like a strange choice. Yet the organisers clearly know their audience, as the beaming trio packed the bar at Diable Rond. The 5.6.7.8’s’ musical pastiche remains a bit too straight for my personal tastes, but it’s tough to hold back a smile with their commitment to do the time warp again and again.

Racing back to Cabaret de la Dernière Chance, I parked myself front and centre for Quebec City’s hotly tipped Victime. While every member of the trio a sight to behold, guitarist Simon Provencher stole the show in his short-shorts stretched to their limit with extreme leg splits. With a vibe falling somewhere between the neo no wave of AIDS Wolf, dance-punk of Q and Not U, and crabcore of Attack! Attack!, Victime created a gloriously manic racket. 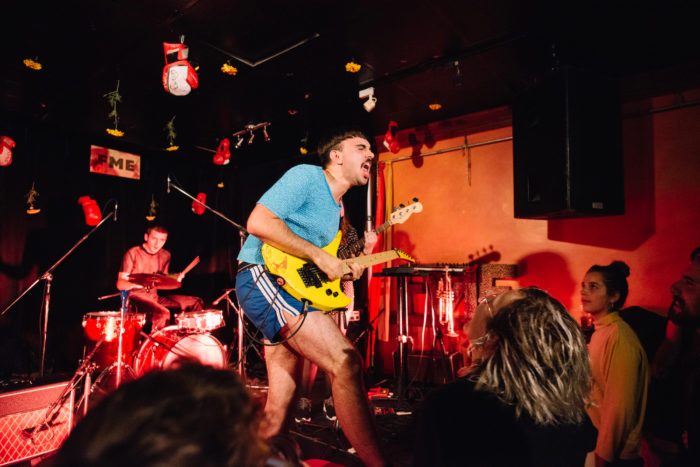 Despite catching Atlanta’s supercharged goth-punks Material Girls a few nights earlier in Toronto, I was barely prepared for their mind-blowing 1 a.m. FME set. As the quintet switched instruments and traded vocal duties, they conjured something in the ballpark of Birthday Party-era Nick Cave fronting an evil B-52s in a John Waters nightmare. Armed with squealing horns, noise slide guitar, and furious conga slaps, Material Girls delivered the standout performance of the festival weekend.

Hull, Ontario art-rockers FET.NAT are one of the most unique bands to emerge in recent years, so their 2019 Polaris Prize shortlist nomination was a welcome surprise. Live at FME, the stop-start instrumental interplay between the quartet felt like watching the Godfather of Soul command the J.B.s It was difficult to discern FET.NAT’s “leader” with drummer Olivier Fairfield pushing his kit to the front of the stage while calling the shots. Bashing out tightly coiled break-beats and triggering samples while locking in with bassist Pierre-Luc Clément, they sounded like a furious post-punk Squarepusher. Saxophonist Linsey Wellman alternated between alto squeals and baritone blurts, while singer JFNO brought a singularly sassy energy, raising cardboard signs above his head and pitch shifting his vocals into alien ranges. FET.NAT’s sound may be strange, but the spectacle is undeniable.

The final day of FME was devoted to metal, one of Quebec’s greatest loves, as evidenced by the special edition Metallica Budweiser cans available nowhere else in the world. Fans milling around the streets of Rouyn on Sunday saw a sharp increase in black hoodies and shoulder-length hair before the heavy festivities commenced. The studded masses had arrived to see local melodic death metal group Archons, the legendary Necrotic Mutation (who once performed with future Quebecois TV personality Julie Snyder) and deathcore pioneers Despised Icon. Crowds inside the Petit Théâtre grew to three times the size of the rest of the weekend, with a raging pit surrounded by head-bangs and devil horns.

Thankfully, it wasn’t all fire and brimstone. Inside the cozy confines of L’Abstracto, harpist Emilie Kahn led a set of melancholic pop with dreamy backing band arrangements of synth, bass, and drums. Packing out the pews of L’Agora des Arts, Ontario rock hero Daniel Romano revved things up with his stadium-sized riffs and onstage charisma, barely missing a beat between songs. Guitarist Dave Nardi, who lives a parallel life as the head of experimental reissue label Morning Trip Records, delivered neck-popping backup vocals with an unmatched intensity.

After dancing to a set of old school acid house by DJ Miss USA, we found Rouyn’s real after party at Bar Des Chums’ karaoke night. Here, locals and festival visitors come together one last time for a uniquely Quebecois experience including conga lines to a French language version of The Hokey Pokey. As the night raged on and the grosse Budweisers flowed, watching smiles forming on the faces of Bar Des Chums regulars as we belted out Love Shack, Piano Man and Mr. Brightside proved we aren’t that different after all.

All words by Jesse Locke, this is his first piece of writing for Louder Than War. Images © Myles Herod, Christian Leduc, Louis Jalbert and Dominic McGraw