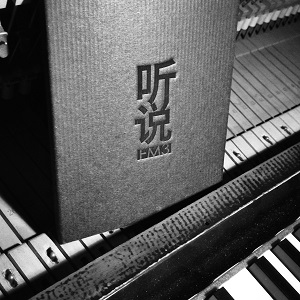 If an album comes via the recommendation of On The Wire’s Steve Barker then it has to be taken seriously. He may have a vested interest along the way being credited for his help on the album and having FM3 member Christiaan Virant assist with the production of OTW during Barkers absconding to Beijing between 2003 and 2012, but still take the legend seriously.

On this, the duo’s first new album for ten years Virant and Zhang Jian have created one of the most technically perfect albums you will ever hear. Over the last decade, FM3 have primarily been known for their Buddha Machine device, a cigarette packet sized musical loop box endorsed by none other than Brian Eno and capable of repeating several drones and tones into ambient compositions.

Ting Shuo (translated as ‘listen before speaking’ – wise words) contains six tracks complimented by cello, grand piano and vintage Roland keyboard are nothing less than perfection. Every note and tone is faultless in compositions which are both beautiful and haunting.

Immersion in each one of the pieces is easy as images of any number of situations is possible from melting snowflakes to lake rowing to weightless floating. Album closer Yi Gui manages to instil a feeling of loss and sadness but with an overriding feeling of submerging oneself in complete and utter euphoria.

The title track is case in point as a single tone blip spans the length of its seven plus minutes with additions of cello sweeps and piano taps with intense intricacy. The distance between sounds is perfect and the sense of anticipation is regularly rewarded.

Dui Xiang is probably as much about the sounds of silence as it is about the lingering timbres that engage with a subtle ease. Invoking an air of sorrow into the proceedings with the distinct possibility of shedding a tear.

Ting Shuo is a fine album and one for which the digital age was surely invented. Ten years in the making and worth every second.