For the past two years Flying vinyl have been releasing 7″ singles to subscribers on a monthly basis by bands we have fallen in love with and caught treading the floorboards at some of our favourite venues and festivals recently.

For twenty quid a month the postman delivers five of these at a time (as well as the occasional magazine and sticker) and a glance through the list of past releases is enough to consider catching up on for those of us who still enjoy collecting stuff to place on a shelf and dip into during those cold winter evenings or warm summer afternoons when events such as today’s gig are still etched into the memory of those of us still too hung over twenty four hours later to tackle the outside world again.

This year’s festival, featuring ten of these bands (we missed four and feel very bad about this) was an improvement on last year’s event that was held in the confides of Hackney Wick when at least one of us questioned the strength and potential (hate that word) of the bands on show. We suspected we’d be wrong. Most of the bands we saw last year have choruses we’re now whistling down the high street and looking forward to seeing at this summer’s festivals. The six bands we see today at East London’s Oval Space give some of us even more of an excuse to put ones head on the line and expect the same path to be trodden as the ones we witnessed twelve months previously.

ANTEROS have some foot stomping pop songs that are instantly captivating and a great soundtrack to the hot summer afternoon like the one we experience in between bands on the other side of the glass wall today.

The same can be said of DREAM WIFE  (main pic) whose sweet pop choruses have a bite in them (‘Gonna Fuck you up’ they sing and drop in an occasional Spice Girls or Blondie lyric). There’s a collection of songs this band have that have certainly grabbed a lot of peoples attention already this year and we get an early mosh pit featuring we imagine those who have already been in this sweltering venue for more hours than we have.

TRAAMS play the best show at least one of us have seen them play to date. Chopping repetitive rhythms that make us want to dig out our old Band Of Susans albums. Riffs dip in and out and have us marvelling at the bass lines that at times seem as prominent and as important as any vocals that many tunes we hear today (and everyday). This must be a trio who have at times all sat around their turntable marvelling at all those Sonic Youth and Stereolab slabs of vinyl from the past – superb stuff.

The sun on the terrace is now beginning to take effect on the tops of punters heads whist inside the racket being made by HIDDEN CHARMS with their foot stomping sing along (we don’t know the words too these yet) 60’s influenced heavy blues. This is the kind of stuff that reminds us of the day we saw Royal Blood and dismissed them as just making an enormous racket before they took over the world and played in front of thousands during a mid afternoon festival slot as we craned our necks complaining that we should have taken more notice earlier in our lives. 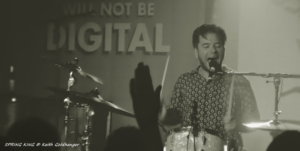 Surely SPRING KING are destined to be playing in front of thousands in months to come? They perform tunes that we continue to raise our glasses to as often as we did when we first saw and found ourselves in front of The Vaccines. A drummer singing catchy, rowdy punk rock anthems that are backed up by distorted guitars and backing vocals make this a live band the beer swilling masses will love and no doubt spill their pints to as arms are raised and backing vocals added by not just the other band members but the paying public.

The WYTCHES are now a four piece with a second album and grab influences from Nirvana, The Birthday Party, Sabbath and at least half a dozen other favourites from the past but still remain comfortable within the sound they created when we first crossed paths with them three or four years ago. It’s a rowdy crowd to be performing in front of and a fitting end to a hot day reminding us that the bands we have witnessed will no doubt be seen at least two or three more times before the next Flying Vinyl event comes around.

By my reckoning that’ll be sixty more bands to choose from if Flying vinyl continue to put these fabulous tunes out at the same rate that they currently achieve.

Already this year there’s one or two of our favourites already included on this label and we’re only four months into it.

Something to look forward to when we’re dragging ourselves through winter again next year.

More information on Flying Vinyl on their website here.