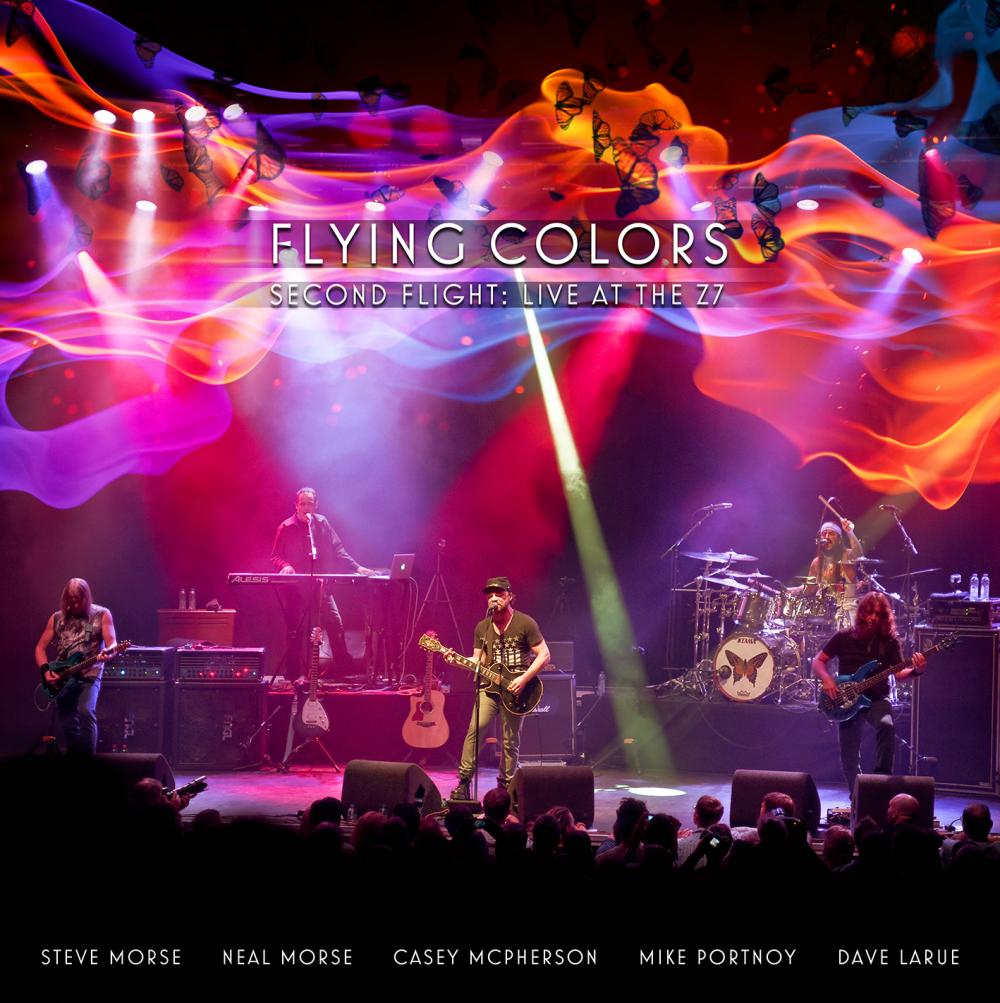 Flying Colors – the ‘supergroup’ (don’t you just hate the word) based round the heavyweight talents of  Deep Purple’s Steve Morse and the ubiquitous Mike Portnoy, release a live souvenir of their second album tour and even find the time to experiment with some new technologies for recorded sound. Mike Ainscoe checks on how it all pans out.

Of course it’s not just about Morse (Steve) and Portnoy. Flying Colors were always about being a band rather than a big name, high profile project.  It sees Neal Morse, taking a break from his own prolific solo career to become just one of the guys – keyboard player/part time vocalist – along with Steve Morse’s Dixie Dregs bassist buddy Dave LaRue and singer Casey MacPherson. The mission – to merge the complexity and instrumental virtuosity with the mainstream leanings which would open them to as wide an audience, and the accompanying commercial opportunities,  as possible.

Still recognised by PROG magazine (with the Morses and Portnoy how could they dare not to) with album and band of the year nominations, as seems traditional, the album – tour – live release cycle set following their first album continues. On the release of ‘Second Nature’, probably a more fully realised album than their ‘Flying Colors’ debut, only the eighth show of their 2014 tour found them at the Z7 in Switzerland, ripe for filming and recording. Quite an ask bearing in mind as Steve Morse commented “we had just performed many of these songs for the first time live days before.” Nothing like a bit of pressure to sharpen the edge.

What the Flying Colors project does offer its members is essentially what the guys set as their motivation for doing the band – the joy of playing together  – something which is clearly visible in the footage. Even behind the kit at the side/back of the stage, Portnoy’ natural exhuberance and showmanship is hard to ignore. They naturally have their progressive leanings – ‘Open Up Your Eyes’ and the grandly titled ‘Cosmic Symphony’ along with ‘Infinite Fire’ from the first album bookend the live set, yet are more like extended songs though  if that’s the way to distinguish what they do as being a slight departure from traditional prog rock.

Anyone who knows the Flying Colors catalogue  may well have used the handy CD scanner to flick straight to ‘Peaceful Harbor’ – the inspirational highlight of ‘Second Nature’ (which is also included as an orchestral version on the DVD menu  as well as on the vinyl and digital releases). The live version doesn’t disappoint and is possibly the one song which highlights the sum of the parts as well as the role each individual plays in the band – from the soft acoustic strumming and shared vocals from McPherson and Neal Morse, to Portnoy’s drum entry and Steve Morse’s solo of the night, it’s frankly a masterwork.  On the other hand there’s the more fun element in things like ‘One Love Forever’ acoustic which sees Portnoy downstage with his own mic to add his part to a semi acoustic romp and show that these guys can also do harmonies and that it’s not all studio tracking and trickery.

The package sees the same set in audio and visual form, the sonic aspect revealing some ingenious technological innovations offering up new ways for the fan to experience the FC live event. A choice of experiencing the 5.1 sound from either the sounddesk or the very front row, the latter of which could accompany some of the very  ‘at the feet’ shots of the photo pit cameraman. There’s also the option to listen in headphone surround. Add to that the sympathetic ear of engineer Rich Mouser and Manchester Metropolitan University’s harmonic phrase analysis which imparts a more organic feel to the sound field, PLUS the video footage of the show mastered using Dark Energy technology from the 24 cameras in the Ultra HD presentation and it’s a mind boggling extravaganza.

If the only complaint is wishing that they wouls spell ‘colors’ and ‘harbor’ with a ‘u’, then Flying Colors must be doing something right.

You can watch the official album trailer here.