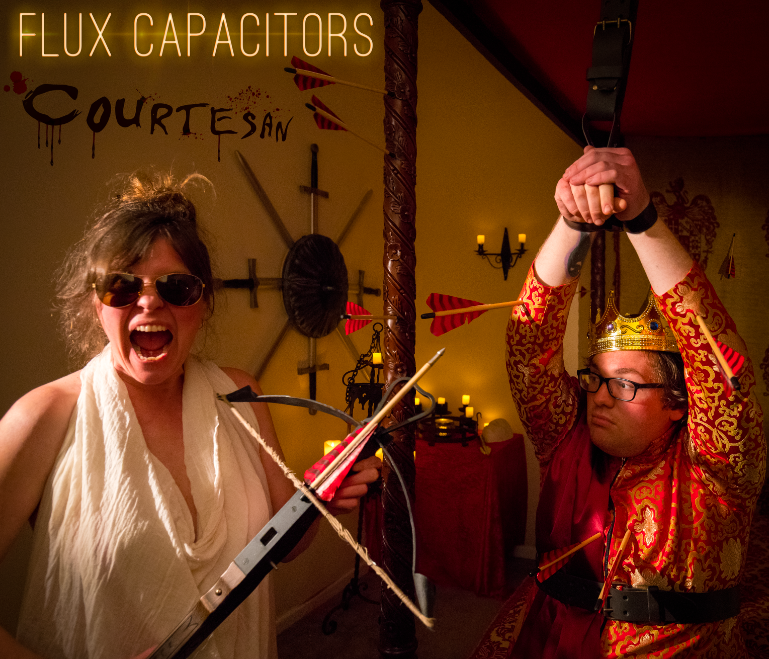 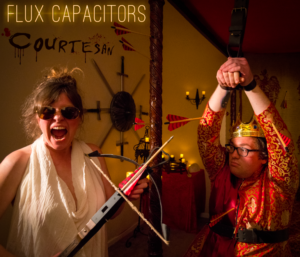 One ex-Blue Aeroplane and  a talented co-pilot make a racket, bare their souls and take the piss in a hotchpotch album veering from genius to madness and back again.  Ged Babey loves them.

Shit name – Great band.  I was expecting an American Ska-Punk combo in big shorts and  with crap beards.  Instead the Flux Capacitors are a brilliant, unique and quite bizarre prospect and gonna appeal to fans of the Lovely Eggs, Half Man Half Biscuit, old post-punk fans and basically any one who digs originality, self expression and Lo-fi odd-ball geniuses.

The band is jointly lead by Hazel Winter and the Commander who as well as being different genders are separated by an age gap of more than 30 years! For the young Commander it must be like having a mad old Auntie in yer band!  That said, she is the coolest, boho songwriter in Bristol,  a former Blue Aeroplane and a lo-fi version of PJ Harvey being intermittently possessed by the spirits of Victoria Wood and Ian Dury!

Whereas Dury started a song with the words ‘Arseholes, Bastards…’ Winter starts one with; ‘Fuck, Shit, Bugger, Cunt!’  in order to find a rhyme  for ‘My hair is thinning at the front’.

And she does poems – in a more sweary Victoria Wood style – which are on-the-road tales in the life of a perennial support band  – There is the time they pinched some of the main bands rider  We Double-dipped the Blockhead’s Hummus‘. The time they Played a gig in a Cloud (because it was so far up a mountain)  and the classic  Three Drumkits on One Stage… (support bands will relate to that one, if they’ve encountered a main band with a new kit or selfish drummer)   Don’t let that put you off though.  They are funny and work well as between song interludes.

The Commander or Michael McNeil as he’s known to his mum and the police contributes three songs on which he sings (Melt, Paul and Buckfast at Trinity) which are the most ‘punk rock’  ones perhaps.  Melt is a surf-punk song with characters from Star Wars and Back to the Future, a guest appearance from the new kid at school who follows you home and a feedbacking guitar sound which sounds like a chicken being strangled – in a good way!  (It’s up there with the Pixies Cecilia Ann and Rock Music! as a great piece of Surf-Punk)

Paul is a character assassination in song about a nagging boss who is always on his case  “One Missed Call – Fat Paul” and a great Syd Barrettesque couplet.  He thinks my name is Michael/ but that’s not my name at all.

Buckfast At Trinity is the Commanders finest song though – a story about his dad going to see the Death Cult at the old Bristol venue, getting a bit too off his head so that These walls don’t reach the ceiling ( I saw the Sisters of Mercy at the Trinity and that line reminds me of their ‘Acid on the floor so she walks on the ceiling …this place is death with walls’.  So the bad-trip atmos of 1984 goth gig is captured perfectly!)

Hazel Winters songs are very different. Chaos and Oblivion are slower, soul-baring pieces – delicate and baffling. A bit Courtney Barnett alt-country in style.  Swimming and Deep-Diving combine gallows-humour and pathos with sympathetic jazz-grunge backing.  Hazel’s lyrics are frankly brilliant . She said you’re not one of us / and if there is no god, I will be furious...  She is a ‘veteran’ after all,  with four solo albums to her name between 2000 and 2013. This message will be saved for the rest of your life…  Her songs deal with a lot of shit life throws at you and she seems to use them to counteract depression and existential angst by using humour and self-deprecation ( a big word for laughing at it all and taking the piss). In Swimming, one minute she is hanging from a balcony, naked with a crowd gathering below, treading fresh-air.  The next she is swimming, with her mouth full of polluted sea-water…. I’ve never swallowed so much piss without being paid for it!

The centre-piece of the album to my mind is Telephone Triage Assessment. A semi-spoken rap about suicidal thoughts and an NHS assessment by phone.  The musical backing is drums and feedbacking guitar but the gallows humour and laughing-in-the-face-of-it anger at the box-ticking and patronising procedure is darkly comic.  Rate yourself, on a scale of one to ten, where one is pink and fluffy and ten Armageddon…  She concludes that despite the good things in her life she was always destined to be just a Courtesan in the court of King Joffrey.  So accepts the occasional suicidal thought as just part of Life’s Rich Tapestry and instead of doing herself in – writes a song about it.   How a song about such a traumatic ‘life event’ can end up being a life-affirming work that is laugh-out-loud funny is a stroke of genius.

And to think, Michael only asked Hazel to join the band because “basically… because she’s Got A Car” according to their press release.

An assorted  rotating cast of friends make up the rest of the band; Annie Gardiner on bass and Dave Burbidge on drums on most of the album, with contributions from Ellie Daymond,  Max Harrison (drums) Gerard Starkie (guitar) Anja Quinn (backing vocals)  Beth Porter (cello) and Andrew McGillan (harmonica).  This gives it the feel of an organic, hippy jam session, arsing-about maan scenario but the song-writing is so astute, clever, funny and off the wall that it works brilliantly.  The whole artistic freedom, no commercial pressure or expectations make it irresistible and lovably grrrreat.

Against all the odds, despite breaking every rule in the book, even though they are weird, wired, loopy, mis-matched, wonky and strange – this is probably the best combination of wit, poetry, surf-punk, feminine post-punk blues and existential angst with  added sarcasm and feedback that you will hear, this or any year,   I salute  The Flux Capacitors -and wish they were the perennial support band in my home town!

Album Launch party at Bristol, The Exchange, Saturday 3rd Feb  – details  on the Facebook Event Page   CD’s on sale there.