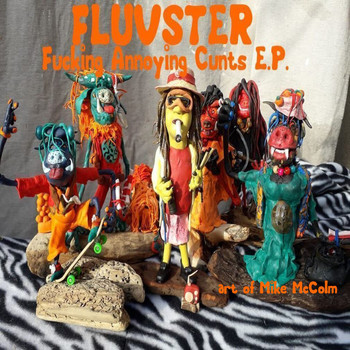 Stoner, Raver, Rocker mentalist the Fluvster returns, with his most punk-rock work yet.

Sometimes, there is nothing quite like a damn good swear to get things off your chest.

Maybe I should’ve grown out of it by now, but i always get great pleasure from swearing in songs. For emphasis. And for fun.

Anger is an energy (and it needs a handy vocabulary) and without it Fluvster would be another stoned ‘hippy’ noodling away… but, like they say, ‘scratch a punk and you’ll find a hippy underneath’. Well, the opposite applies.

This is Fluvster at his most angry, basic and straightforward – channelling frustration at the state of the nation and those in charge.  They are pigfuckers and humbuggers apparently.

The drumming on the second song Mule reminds me of Palm Olive on those first two Slits sessions and his voice has a similar tone to Patrik Fitzgerald and the label he works with is run by a former member of Alternative TV.  These three tracks are sheer joyful one-take exorcisms.

When I reviewed Fluvster The Ghost’s Toolbox album three years back I called it:  Neither dance music, nor rock music… there is a core of political protest but it is wrapped in layers of stoned-groove and free-form music. This is a One-Man-Psychedelic-self-expression thing – with a who-gives-a-fuck, Free festival vibe..

One of the comments made under the review summed it up even better (Thanks DJ Shrek a.k.a. The Voice Of Buddha)  There is something about Fluvster… his work intrigues me. It’s unique… It’s funny, it’s weird, it’s clever, it’s rough, it’s dirty, it’s stoned and sometimes it’s plain stupid. It’s incoherent with a plan. It’s too long sometimes, or too short. It can be beautifully ugly and hideously beautiful. It’s a bit off, in a very good way. It’s very intuitive, all over the place, no boundaries. It’s indescribable, a feeling, it gets you. Or not. If it doesn’t, the fault is yours and you missed the point.

All of his back catalogue is online here and here to check out, wallow in or dip in and out of and enjoy. I’d recommend the Planktonites album which has another Fluv-punk classic Driving Me to Drink and a great anti-social-media hip-hop track called Got No Twitty.

And he’s starting to look more and more like Mike McColms brilliant Plasticine art model of him every day!