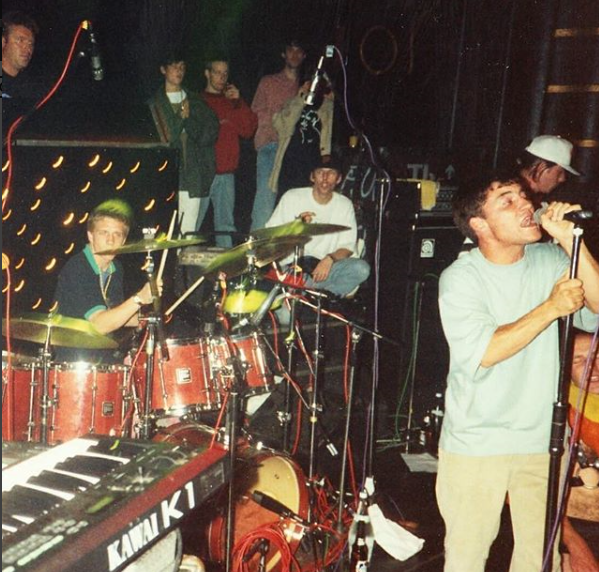 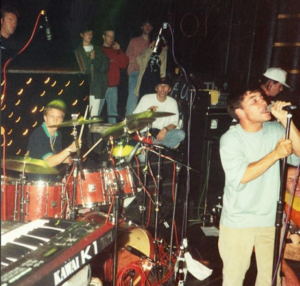 Flowered Up are the much loved London band, influenced by The Clash and The Stone Roses, that sprouted in the early 1990’s who went on to record some of the most loved songs of the period including It’s On, Phobia, Take It and the seminal Weekender. Louder Than War’s Matt Mead is the curator of a forthcoming exhibition and the as yet to be announced book all about the celebrated band. In this exclusive article Matt uncovers some tantalising details of what he’s been up and what is expected to be seen at the exhibition.

Just to give abit of context about the project, back in 2016 I was in contact with Flowered Up drummer Joh Tuvey through my connections with Manchester’s band, featuring ex Stone Roses Andy Couzens, The High. After striking up an email conversation John sent me 5 emails full of details regarding this time with the band, the aim for me to write an article on Flowered Up on Louder Than War. At this time John also suggested that i write to Tim Dorney, Flowered Up keyboard player, upon doing so he supplied an equally lengthy email with lots of info regarding this time in the band. The resulting article is one of the biggest viewed articles to ever appear on Louder Than War . 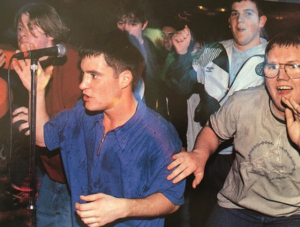 Not long after the article appeared I was asked to do a book on the band. Having no expertise in publishing books and after abit of thought if I could take such a project on I literally took the bull by the horns, hunting high and low for anything and everything about the band I can get my hands onto. Since 2016 I’ve been kindly sent a mass of archive unheard recordings plus unseen footage, band memorabilia, including press clippings, personal letters from the band to fans, personal pics of fans with band members, plus professionally shot pics of the band on stage and off stage, both from the bands entourage and professional photographers, furthermore I have been able to purchase archive press articles, posters and test pressings, meaning now I have a fair wedge of archive.

So with all this material and with the book still yet to see the Sunshine, I was approached to do an exhibition to be held at the 2018 Shiiiine On Festival, the annual indie festival that is held at the glamourous Butlins dome on the cost of Minehead with this year’s headliners being Shed Seven, Ocean Colour Scene and Orbital, amongst a blanket of further stellar acts, this years festival is set to take another step in the success direction. 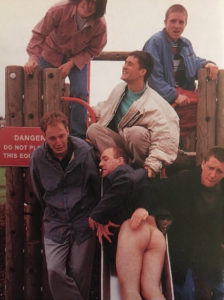 The exhibition will have a small selection of some of the items I have been able to collect. There will be a gallery of 20 A3 size never before seen pics of the band in full flow, including the band on stage with rest of the audience at The Marquee, Suggs on stage with the band at Madstock 1992, Madness’s big comeback gig and other mad capped moments caught on camera. There’ll be a host of archive material on show including press shots, press cuttings, old T Shirts plus some new memorabilia will be available including posters, badges and t shirts. Also founding band member Andy (Jacko) Jackson will be in attendance to talk to and sign items for fans in attendance.

All of the above has the approval from the living band members, plus Liam and Joe Maher’s family, in whom the exhibition and everything associated with the work I’m doing is dedicated to. The brothers Maher sadly passed away far too soon and have left a legacy of love for all fans who love Flowered Up, a band that means so much to fans that were able to see the band from 1989-1992 plus those that have discovered the flower men after these formative years. Hoping to see you all at the exhibtion, If not ‘…just make sure what you do makes ya’ happy…’