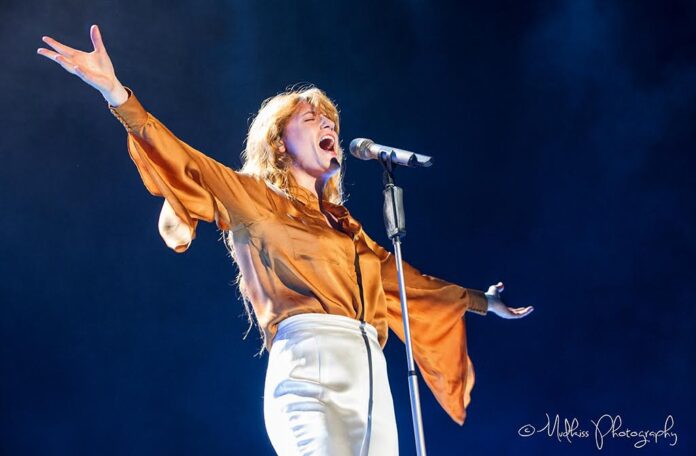 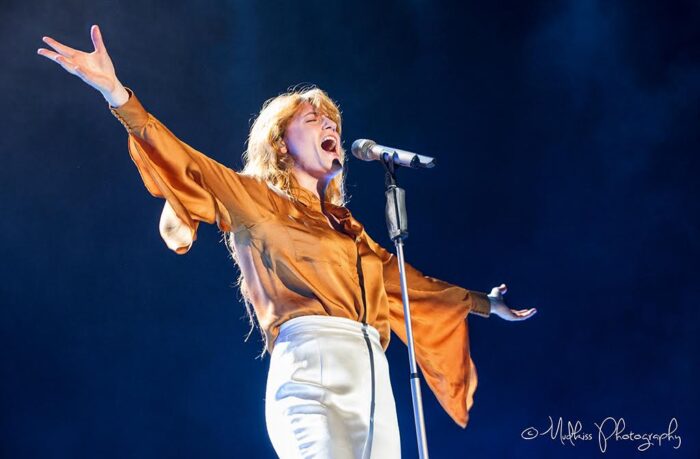 Florence + The Machine are definitely on a high at the present time. Selling out most of the Arenas where they played on their UK tour, the band finished by a 4 night run at The Alexandra Palace. They have seduced critics and the general public and the reviews of the tour have been ecstatic. Having managed to secure a couple of tickets for the Thursday night I show, I must admit I wasn’t attending with high expectations as apart from the songs I had heard on the radio I didn’t have much knowledge of their back catalogue. Far from being a veteran of arena’s and big venues, I usually go to small places where you can see the band at close counters so I guess it also took me out of my comfort zone. The first thing that you noticed on the night is that all the age groups were present. A fact that fellow LTW  reviewer Nigel Carr also noted in his review of the Manchester date. It is a sign that the band has grown out of its indie status and has made a place for themselves on the mainstream music scene. 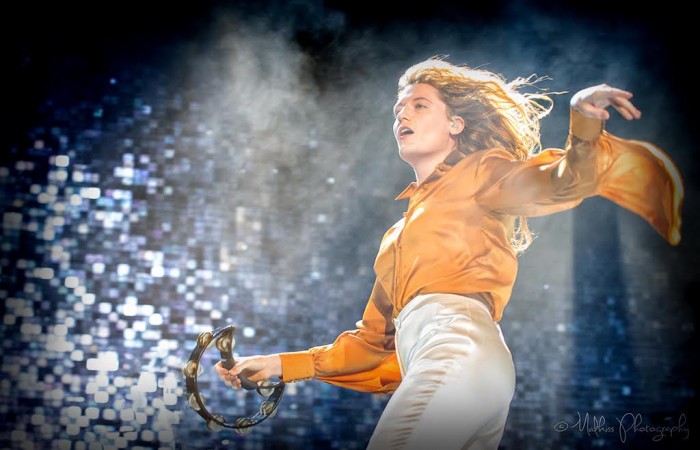 The Alexandra Palace is one hell of an impressive place, with the extra help of sound proofing on the ceiling, what could be a cavernous nightmare ended up being a perfectly good sounding hall. Opening act The Staves made a good impression on the audience and after opening for Florence + The Machine for the whole of their UK jaunt, will be headlining their own UK tour in November. The stage crew brought down The Staves banner to reveal an impressive “mirror ball” styled backdrop which added to a series of extra on stage projectors provided an impressive decorum. The Machine came on stage first and were joined shortly afterwards by Florence. Opening the gig with “What The Water Gave Me” from 2011’s “Ceremonial”, the band was confident enough to follow it with “Ship To Wreck”, using one of their catchiest and most popular songs early in the set. By the second song Florence had already clocked up half the mileage of a marathon as she constantly sprinted from one end of the stage to the other. The band returned to “Ceremonials” with “Shake It Out” and the following song “Rabbit Heart” saw her standing precariously on barrier touching hands with fans and even borrowing a girl’s tiara for a few moments. Nevertheless the middle part of the set suffered from a lack of memorable songs, Florence’s vocal prowesses and energetic stage presence couldn’t make up for the fact that the tunes (anthem-ic sounding as they were) lacked the memorability of “Ship To Wreck”. The show is a very scripted performance (the band played the same list in the same order for the whole of the tour) and Florence’s “pop star- shamanic” poses are an acquired taste. Apart from these quibbles that are probably trappings of being a big pop act, the rest of the performance was perfectly fine with the 3 piece horn section providing nice flourishes here and there. After dropping to the ground after a rather energetic “The Dog Days are Over”, Florence left the stage, only to come back to play a couple of extra songs, closing their show with “Drumming Song”.

Photos by Melanie Smith from The Manchester Arena date . More work by Mel on Louder Than War can be found at her author’s archive. You can find her on Facebook andTwitter. Photography portfolio can be found here:mudkissphotography.co.uk.