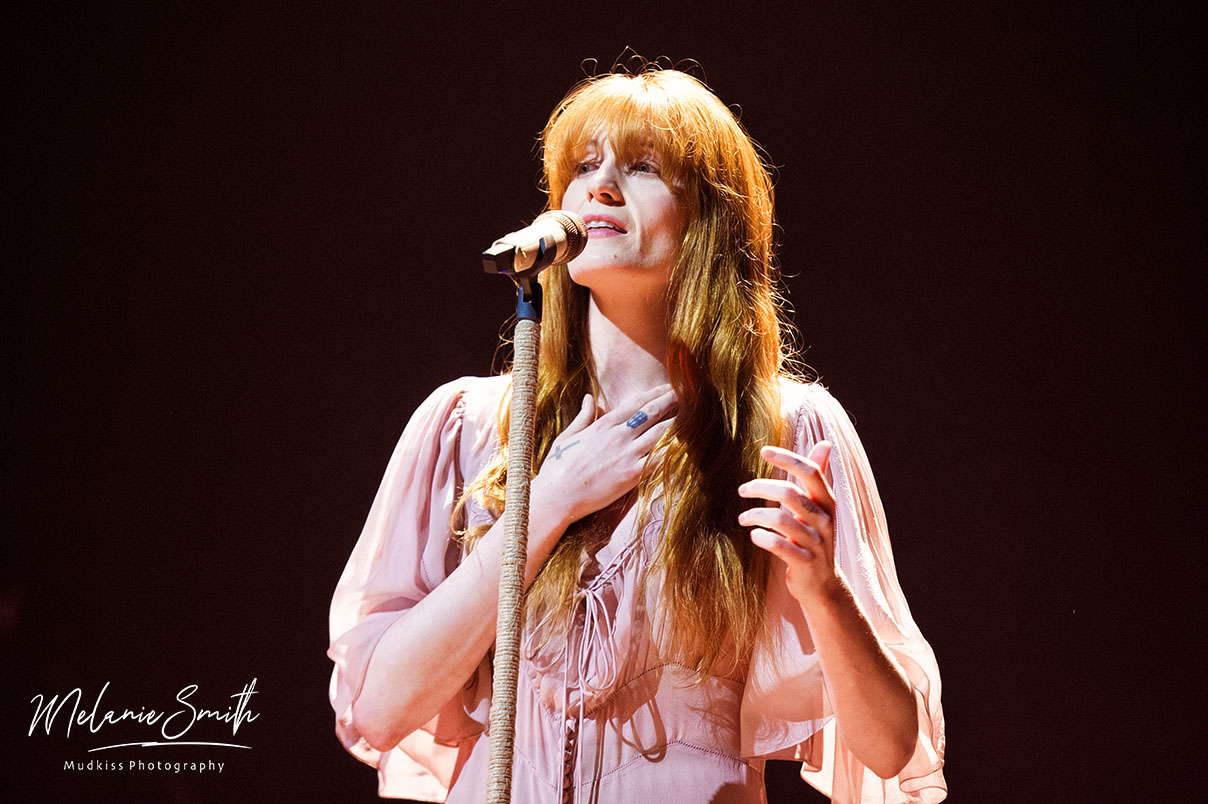 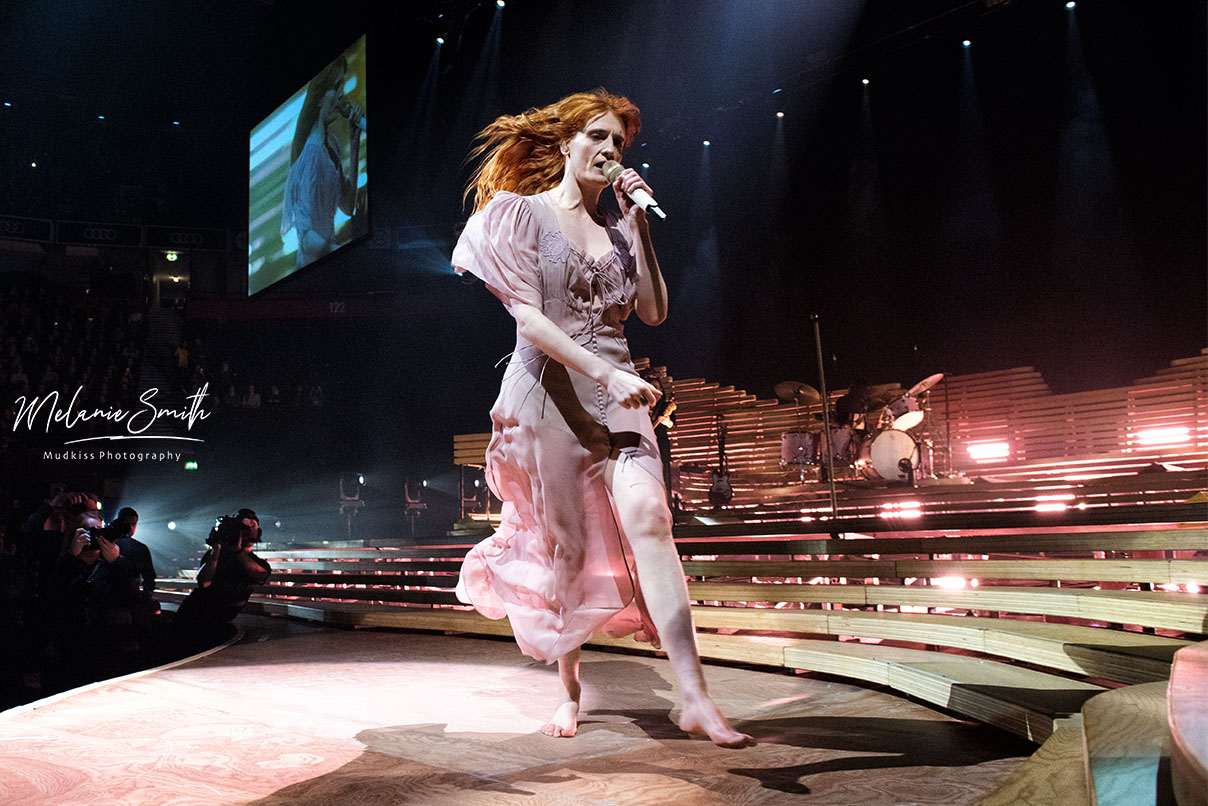 It’s a welcome return to Manchester for Florence and her ever more sophisticated Machine, who last played in the city in 2015. A lot has happened since then.

That year unexpectedly vaulted her into the upper echelons of superstardom after Dave Grohl handed her the main stage at Glastonbury by breaking his foot. She sold out Manchester Arena and nailed it. Riding high on the release of How Big, How Blue, How Beautiful she engrossed the crowd in a scintillating performance that had the whole arena rocking.

Fast forward and some of that rockiness has dissipated. The new album High as Hope is a much more down to earth affair with more orchestration and even a smattering of folk taking the place of some of the dancier tunes found on its predecessor. As a result, the show is far more thoughtful and contemplative – a change in pace that clearly suits tonight’s crowd in this sold out venue.

The gutsy delivery is still apparent – her voice utterly faultless even well into the higher ranges. What has changed is the way she engages with the audience between numbers. Three years ago it was short, sincere and direct. This has been overtaken by an almost frightened girlie giggle. It’s as if all her confidence has evaporated.

Opening with “We are Florence and the Machine, would you like to dance with us – can I invite anyone who is sitting down to stand up”, she launches into June, the opening track off the new album. It’s a big orchestral powerhouse of a track which fills the arena, the now standing audience swaying along. 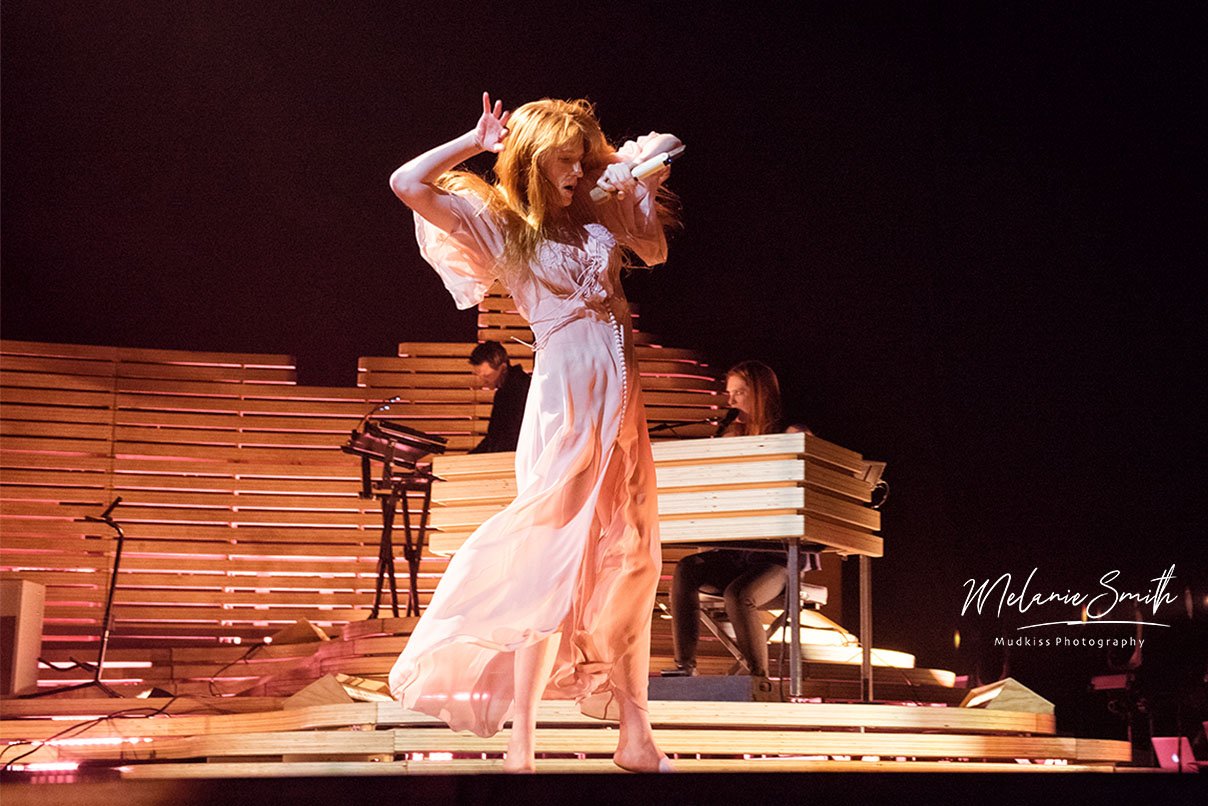 She pirouettes across the stage in one seemingly fluid movement, arms undulating before stopping abruptly in front of the baying crowd, their arms outstretched, she flings an arm forward to seemingly grab the energy and put it in her mouth as the lights dramatically drop.

The athletic performance continues through Hunger and Between Two Lungs, pogoing at one point, she only just makes the leap to the highest point on the stage. The energy expended is immense, it’s remarkable she can still hold a note but there isn’t a single drop in her vocal performance.

“Thanks so much for being here tonight, it’s kind of a special show as my brother was born in Manchester – my niece, who is two is half Mancunian – she’s not a southern softy like me”.

Referring to the 2016 Manchester bomb – “My heart has been with you Manchester – hope is an action” she extolls, before asking everyone in the audience to hold hands. This I find tough as I stare into the hateful eyes of the 7-foot monster whose girlfriend is standing next to me.

The performance sways from the unfamiliar tracks off the new album, which even after a few months elicit a more muted reception, to the wild highs of tracks like Dog Days Are Over. The older songs with more powerful melodies getting the best response with the crowd on their feet (voluntarily this time!).

Again, as if trying and engage with the younger elements in the crowd she talks about ‘toxic masculinity’ saying that “If you are here, you probably support women”. Of that there is no doubt but frankly, I’m here for her music. 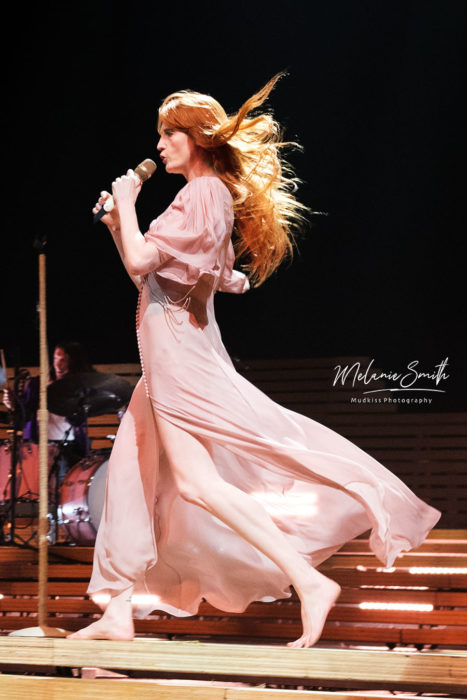 She asks “I want everyone here to embrace each other” (…and I can feel a certain pair of eyes drilling into me!) before telling the crowd to put their phones away. “Tap the person next to you and ask them to put their phone away” and for the first time during the gig, there are no visible screens. She then asks everyone to jump and I fear for the fans on the higher tiers!

Florence has always spanned the genres but as I stated further up, there is a definite switch from rock and dance to the more operatic and theatrical. During Cosmic Love she asks for the phones to come out to provide a stellar backdrop around the arena, lights twinkling, it’s quite a sight. More suited to a Take That or Barry Manilow gig and I’m wondering if this is some ruse to drain everyone’s batteries!

When she once again breaks into the familiar with Ship To Wreck and Delilah the audience goes wild. She scoots off, running around the arena, stopping at the back, elevating herself above the crowd as they worship her in an almost messianic way. She rushes to the front which culminates in her holding the head of one front row member who in turn holds her head. I just can’t help feeling it’s all a little unnecessary.

The show ends with an encore of Big God and Shake it Out, the audience properly sated and Florence no doubt exhausted.

As a show it was impeccable. Florence’s dress was echoed in the pleated drapes which rose and fell above the stage and the supporting cast, from the harpist to the backing singers put on an epic performance. I just felt that the new stuff lacked a little punch and vibrancy. It’s tough at the top and at times it felt like Ms Welch wasn’t coping too well with it.