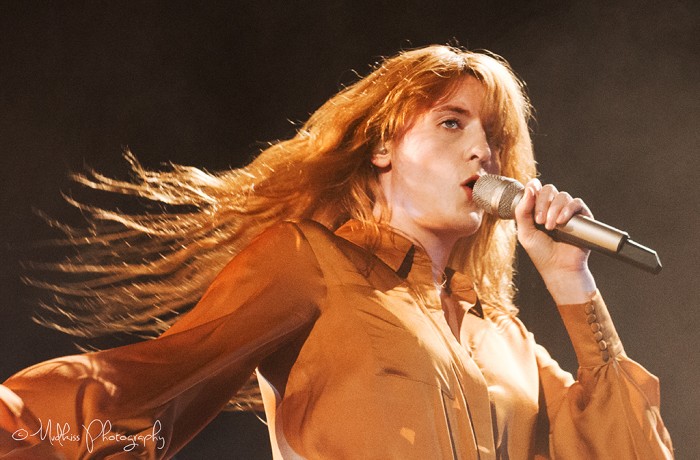 Florence + The Machine put on an electrifying performance at Manchester Arena, Nigel Carr was there from Louder Than War and reports back below with photographs from Melanie Smith at Mudkiss Photography.

You know when an artist has really hit the big time by the demographic of the audience. Most start off small with an eclectic fan base totally focused on their sound, but to be really successful they need to attract a wider appreciation and that is exactly what we’ve got in the arena tonight.

More varied than say, an Elbow crowd, with teenagers squatting at the front of the stage waiting for the support to come on with all ages dotted around, kids with rucksacks propping up the barriers and mums and dads with their sons and daughters in tow taking selfies. Such is the appeal of Florence + The Machine who can sell out this arena with ease but fundamentally appeal to the kind of broader audience needed to become global superstars.

The band’s last album, How Big, How Blue, How Beautiful hit number one on both sides of the Atlantic. Such is the furore surrounding this group who have rarely been out of the charts since 2009’s Lungs album, that they have been catapulted into the the ratified atmosphere normally reserved for far more established acts. Helped not least by a certain Mr Grohl who handed them the headlining slot at Glastonbury by jumping off stage. 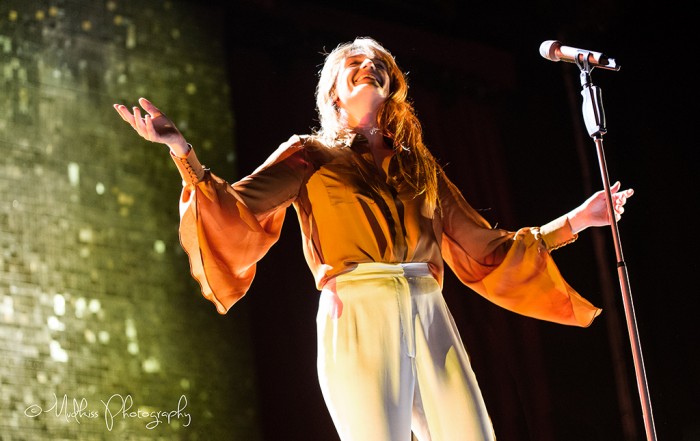 Things could not be better for them, headlining an arena busting tour stopping by in Manchester tonight ably supported by Watford’s, The Staves. A trio of folk rock singing sisters whose enchanting harmonies interweave in a way that only close siblings’ can. Their sound, English with a smattering of 60’s West Coast Americana, sometimes lacking in pyrotechnics, is rich and lush, vocally focused, providing a perfectly chilled mood for the headliners.

Florence opens with Let Me Go and immediately, the crowd sparks in to life, she’s barefoot with a loose fitting silky blouse that is reminiscent of a young Kate Bush as it billows out while she pirouettes around the stage. Comparisons have been made with Bush and Stevie Nicks but honestly Florence stands head and shoulders above these two both in her incredible, almost galvanised vocal ability and delivery and the excitement that she instils in the crowd from the stage.

She runs to both sides whipping the audience into a frenzy – it’s a rare art, impossible of course in such a large auditorium. Most bands struggle to get crowd going in a small venue but Florence does it with ease, coaxing them to join in. Appointing them as her choir and amazingly this huge hall feels small and intimate. 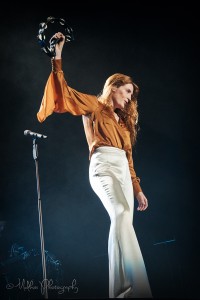 This is a new experience for me – I usually hate arena shows for that very reason – it’s hard to create warmth and atmosphere, but incredibly, whether by involvement or immersion, during Rabbit Heart (Raise it Up), she jumps off the stage and runs around the edge of the crowd singing, with a security guard chasing after her!, It is that total involvement with this audience that makes them feel a part of the show, electrifying.

The biggest reaction comes with the opening line ‘Sometimes I feel like throwing my hands up in the air’ as You’ve got the Love bursts forth – Florence is pogoing on the stage and the whole of the standing crowd joins in – like one huge undulating animal with arms aloft.

After regaling us with the story of an incident which saw the band sleeping in a camper van at the O2 Academy she wells up – it must take every ounce of physical and emotional strength to put on this kind of performance and I suppose she can’t get away scott free – it’s that kind of rollercoaster she is riding, putting on this string of arena shows finishing with four consecutive nights at Alexandra Palace in London.

There is a contemplative moment as the crowd is allowed to calm down during Mother but it doesn’t last long and they are instantly whipped back into a frenzy with Spectrum (Say My Name). During closer Dog Days Are Over she shouts ‘Take something off – take anything off you don’t need’ and the crowd throw anything and everything onto the stage, T shirts, tops and even bras! – this is a crowd having a good time – and suddenly before you know it she’s off, the lights dim and its all flown by too quickly! 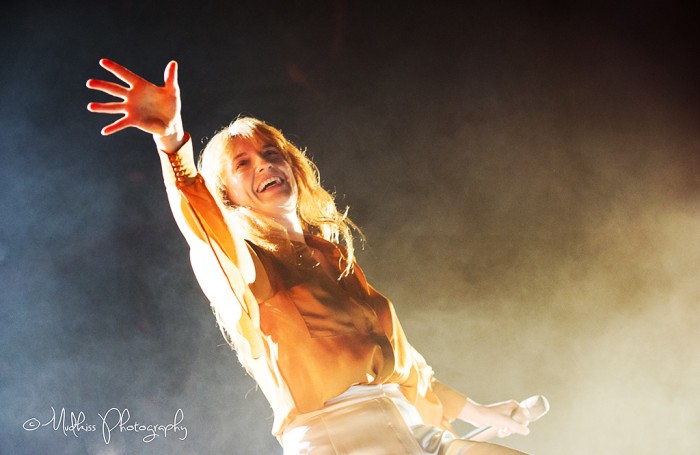 Exploding back on stage with What Kind of Man, she’s right at the front of the stage singing to one wide eyed, bare chested youth and and his glitter sprinkled face is utterly transfixed. It’s a close, intimate, touching moment that highlights just what an amazing artist this charismatic woman is. She reels and falls backwards to the floor writhing to the beat.

The show ends with Drumming Song and after an hour and a half of completely dominating this huge audience she must be completely exhausted.

There’s nothing better than seeing mutual respect in show like this – the crowd as one, dancing to the beat and Florence’s appreciation of the massive well of emotion aimed in her direction – she gives it back ten times over. An incredible performance from a woman at the top of her game.