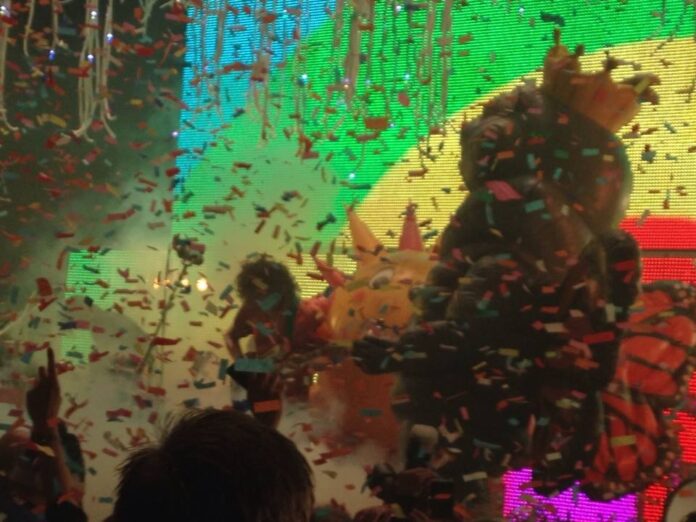 Oklahoma’s Flaming Lips have received a mixed bag of reviews for recent album “The Terror” and subsequent live shows. Even the most diehard aficionados have struggled to come away with a positive response.

Luckily, judging from the stage set which is covered in hundreds of light tubes, a massive LED backdrop and other props, there is nothing to fear as they return to Brixton Academy. Enigmatic front man, Wayne Coyne appears wearing a Gunther von Hagens skin-suit with long glittering merkin and matching glitter ghillie style coat… clearly it’s going to be a fun night.

He is also giving more than a nod to his likeness to Marc Bolan with a cute little heart on his face and floral neck-piece. The now seven piece band features two new drummers in green wigs alongside the original members. The Flaming Lips have always taken risks in their music and live performances – what do you expect when even their manager has been an extra on Star Trek? I recall them playing Brixton Academy as opening support to Moby and Red Hot Chilli Peppers while Madonna was sat on a chair at the side of the stage – quite a show.

They open the set with ‘The Abandoned Hospital Ship’ with confetto canons blazing  and  inflatable monsters bouncing around on stage, then launch into sing-along favourites ‘She Don’t Use Jelly’ and ‘Yoshimi Battles The Pink Robots’ . Oh yes, they mean business.  Showbusiness of the highest order – and Wayne and Steven Drozd can hardly stop grinning.

Rightly so. This is a magical show already and we are only three songs in. They calm the audience with ‘In the Morning of the Magicians’, then rev them up again with ‘Watching the Planets’ plus a new set of inflatable friends, a couple of aliens and another character that is referred to as David Bowies Starman (though it looks more like a massive version of Lisa from the Simpsons).

We hear how much the band feel connected to their British fan base, and in particular London, from when they released ‘The Soft Bulletin’ and then they go on to play ‘Feeling Yourself Disintegrate’ and ‘Race for The Prize’.

The Metal Guru lookey-likey has a quick clothes change into green jacket and trousers as he mounts a luminated pulpit for the second half of the set.  And we are treated to a visual onslaught with dancing gals, coupled with the thumping bass and swirling lights – this is not a concert for anyone who is prone to fitting.  The light and stage show is as relentlessly magnificent as the band and what blends with the tripping nature of ‘Look… The Sun Is Rising’ and big fat bass on ‘The WAND’ and ‘Try to Explain’ has a distinct Floyd stamp to it.

Wayne disappears for a moment then returns to the stage with a pile of silver balloons which he eventually releases into the crowd for ‘Silver Trembling Hands’ and’ A Spoonful Weighs a Ton’.

They finish with ‘Do You Realize?’ and their collaboration with Miley Cyrus (the mention of which receives a frosty response from the crowd), but as they break into the opening bars of ‘Lucy in the Sky with Diamonds’ coupled with the backdrop of the word ‘Love’ flashing with more silver confetti canons perfectly timed to the breaks – there was more than enough adoration in the room for the boys.

Having listened to their fans, this not just a comeback (they never really went away – it was more like just a little dip of unhappiness). The Lips have taken this performance to another dimension of entertainment and blown it right off the runway. With further live festival appearances throughout the summer you would be a fool to miss the fun and a downright miserable curmudgeon not to enjoy the audio and visual feast that these crazy fellas have put together for you.

Flaming fantastic Lips – what is there not to like from a tight band and a lead singer with a glittery cock? 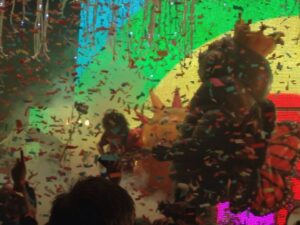