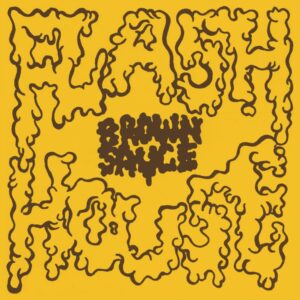 Flash House were originally put together to blag their way into a gig and seemed to have thought little more about it before being hastily reassembled for another support slot which didn’t materialise because Poison Idea split up. Since then they have shared the stage with the great and good including Teenage Bottle Rocket, MDC and the Parkinsons. Available since last month to download things are now set to get almost serious with the imminent release of their album Brown Sauce on what I can only hope is the appropriate coloured vinyl.

The aforementioned bands give you an idea of where Flash House are coming from before their real world home in London is revealed by the smoke that has rather pleasingly gone straight to front man Crusty’s vocals. Now with a name like that I wasn’t expecting Frank Sinatra and his not so dulcet tones compliment the glorious opening cacophony of Three Wise Monkeys beautifully.

As an opener it certainly pins back your lugholes before Raising Cain adds a little bit of a UK 82 punk influence to the mix and the eponymous hardcore track. Styling themselves as “Fast songs played by slow minds” is the sort of playing dumb that the best of this stuff has excelled at since the Ramones. In short the ability to express something in a few words that critically lauded bands take an entire career to do. It is as difficult to make out the lyrics as it should be but what I can distinguish of the excellent Die Alone’s “ain’t gonna make it to the other side, read between the lines hypocrisy and lies” nails religion for me.

Around the midpoint of this sprint when they slow down a bit the quality starts to really shine through as the knack for writing a chorus is given room to breathe. All your noise needs are catered for as Touch of Evil is metal with a tune but it is during Another Day where the guitar licks suggest Motorhead’s Fast Eddie on speed dial that everything falls into place.

At school in English a friend tried to pass off the lyrics to No Class as his attempt at poetry. What passed for a with it teacher was so impressed with his gritty refusal to wander as lonely as a cloud that she started showering him with praise. Having heard enough of this myself and another wise monkey blew his cover by reciting it to her and she finally smelled a rat.

If No Class can appropriate a bit of ZZ Top then the fact that Die Alone is on nodding terms with a mutant hybrid of Poison and The Chase Is Better Than the Catch is not a criticism. They have got the look and countless bands have tried and failed to get anywhere near the prime time Motorhead sound. Sometimes you just want something to do exactly what it says on the bottle. “Rock n Roll dystopia”?  If Flash House move next door your decking will rot. 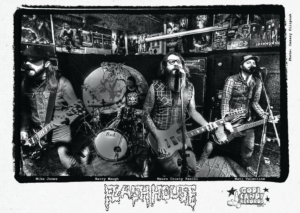