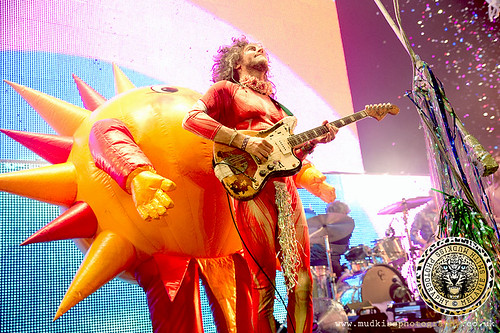 Flaming Lips played at Manchester Apollo this week, as usual it was a spectacular aural and visual treat. Louder Than War’s Melanie Smith was there to photograph the event while Nicky Crewe provided words. 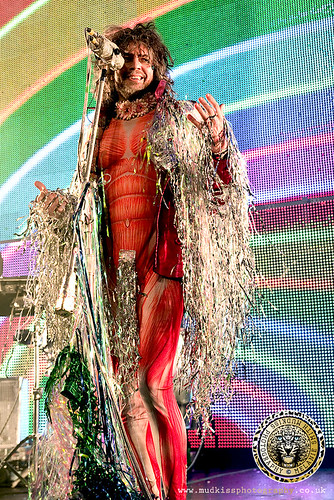 You know you are entering Wayne’s world when you spot a Dalmatian, a wolf and a crocodile in the queue outside the venue. Excitement and expectations were high. This UK leg of the tour had kicked off in Edinburgh the night before and the set list was heartening. Flaming Lips’ material is full of contrasts and contradictions, from anthemic ‘lifting up the sun’ material to the dark apocalyptic vision of the Terror. Dark and light, implosion and explosion, disintegration and reassurance, love and hate, life and death, the highs and the comedowns. It’s all there in the lyrics, music and the stage show.They attract their family of fearless freak fans, some very young, some dressed up for the occasion, all joining in with the spectacular carnival experience. They explore other musicians’ psychedelic back catalogues, Pink Floyd, the Beatles, even the Stone Roses.

After the support slot from the Young Knives, Wayne Coyne pads onstage to help the roadies, barefoot, wearing a Lycra muscle suit, looking good. Not many people could carry that look. A flayed body suit, accessorised with a tinsel cape and cod piece. So there are no big surprises when the band come on stage, some wearing fluorescent green wigs. Strands of lights explode with colour, dry ice, strobe lighting, back projections and glitter explosions take us straight into the experience. There’s no hamster ball on this tour. Maybe that particular bubble has burst. Huge inflatable creatures share the stage, suns and stars, caterpillar butterflies, and aliens. They never upstage Wayne Coyne’s flamboyant front man presence though. He’s an extraordinary performer, part Merry Prankster, part dervish imp, the Carnival King. Contained in an indoor venue, this is trippier than the trippiest trip, a sensory overload, playing with our perceptions. It’s more psychedelic than any pill. The lighting and set designers have done an amazing job. 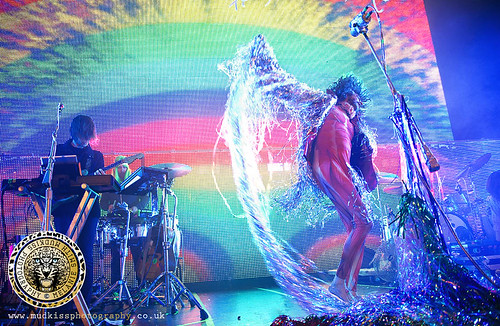 Kicking off with The Abandoned Hospital Ship (revisited after many years on this tour), a Stone Roses cover, She Don’t Use Jelly and Yoshimi, they take the audience with them from the very beginning, singing along with Wayne, but Do You Realize? Is saved for the first encore tonight. The second part of the concert sees Wayne Coyne change into a suit, placed high on a huge light box, hidden behind the hanging strands of lights, part of the projections. At one point he is literally holding the baby. Preaching love, talking to the audience, discussing the transformative power of a Flaming Lips concert  when life seems to be disintegrating. Is he talking from his own experience?  The Dalmatian, the wolf and the crocodile were name checked, recognised as friends. The final encore was Lucy In The Sky With Diamonds, but Miley Cyrus didn’t fly in for them. The sound they made was love. There’s glitter in my hair still.

All words by Nicky Crewe and photos by Melanie Smith whose Website is well worth a visit!