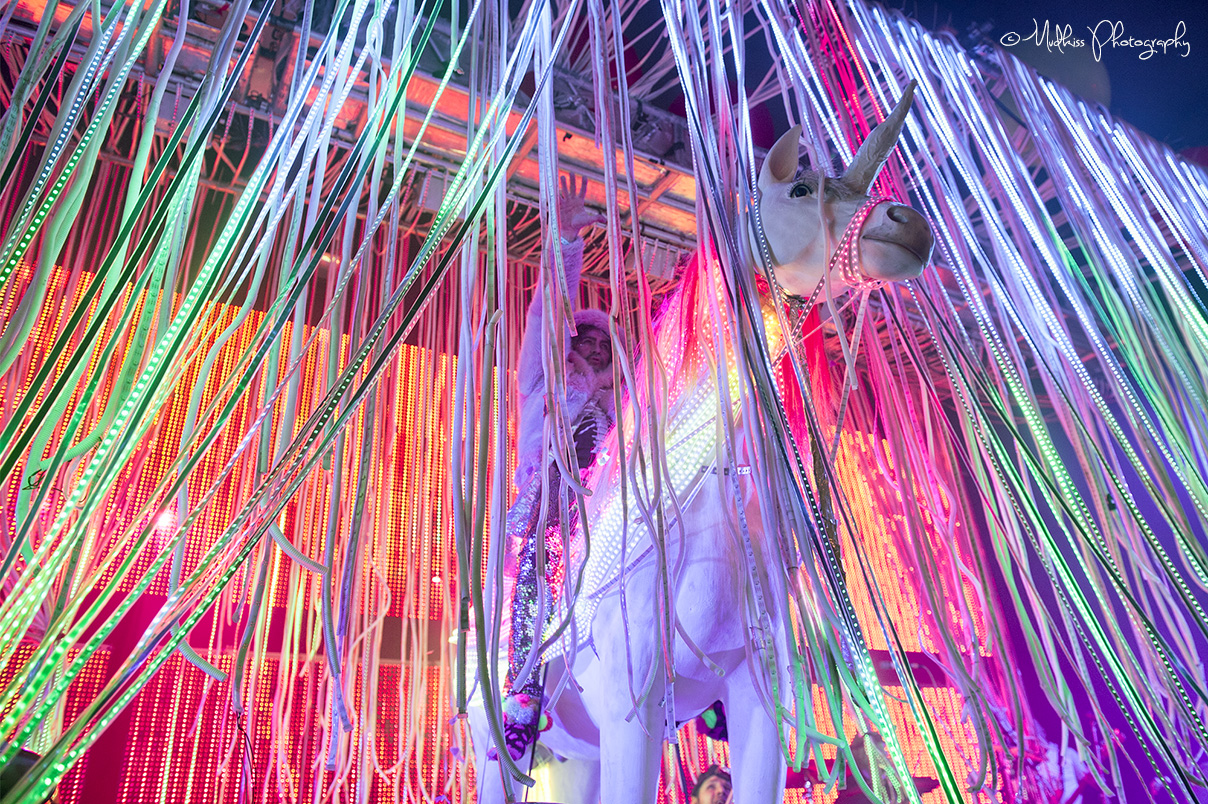 Following the January release of their latest studio album ‘Oczy Mlody’, eccentric experimentalists ‘The Flaming Lips’ take to the stage in Manchester, in their second of only two UK shows on the tour. Louder Than War’s photographer Melanie Smith and reviewer Abi Small went along to have a gander.

Impossible to describe as a rock band, a pop-group or anything inbetween, The Flaming Lips are one of those rare and peculiar collectives that seem to actively refute definition. Continually re-inventing their sound and striving for ever-more innovative ways to create music, Wayne Coyne and his troupe of eccentrics spearhead the charge not only for a musical revolution, but for a revolution of the senses. In a bleak world that seems to blindly hurtle towards disaster by the day, The Flaming Lips offer an appealing alternative to the harsh realities of the modern condition with the unapologetic escapism of their live shows; in this tightly packed venue with an inflatable mushroom in the centre of the room, laser beams cutting through the air and glitter pissing down on the audience, it’s hard to believe that you’re in the centre of Manchester on a freezing Sunday night. 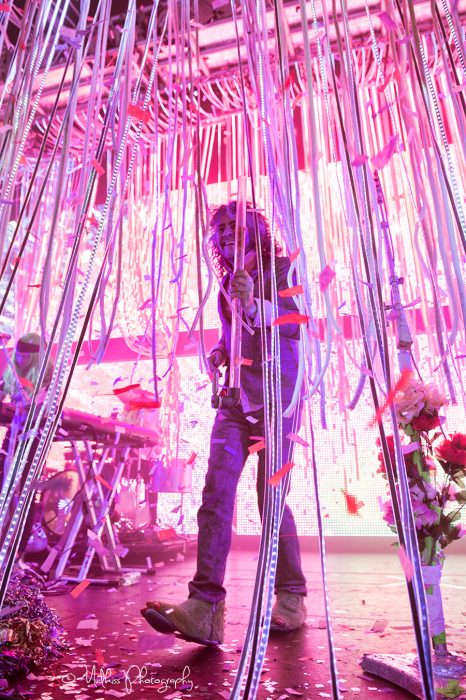 Other than a few festival appearances here and there, the lips have been absent from the UK for some time, with their last tour of the country taking place in 2014. With this in mind, it’s no surprise that tonight’s sold-out gig at Manchester Academy is absolutely rammed to the rafters, making it impossible to move your arms enough to drink that five quid pint you just spent 20 minutes queuing up for. As far as venues go, Manchester Academy is as unassuming as it gets, but tonight this blank canvas was painted with Wayne Coyne’s kaleidoscopic brush and transformed into a psychedelic wonderland in true Flaming Lips fashion. The stage itself was a visual masterpiece bedecked with lasers, a curtain made of neon lights, and several oversized inflatable props including a rainbow and a weird anthropomorphic sun, setting the scene for what can only be described as an assault on the senses. As the lips took to the stage and opened with mind-bending masterpiece ‘Race for the Prize’, this simulated acid-trip spilled off the stage and into the crowd as an onslaught of enormous balloons were released, causing the room to resemble the inside of a molecule as they chaotically collided and bounced across the audience.

Wayne Coyne’s cartoonish dreamscape lies somewhere in the margin between Utopia and Dystopia, and new album ‘Oczy Mlody’ is like an Orwellian re-write of Lewis Carroll, as fairytale-esque lyrics featuring giant toadstools, castles and mythical creatures are set against a backdrop of droning discordant melodies that tinge an otherwise whimsical album with a dark and disquieting undertone. Despite the recent release of ‘Oczy Mlody’ however, The Flaming Lips largely stuck to their older material, incorporating only four tracks from the new album in their hour and a half set. Signature tune ‘Yoshimi Battles the Pink Robots part 1’ is serenely balmy and prompts a rapturous singalong from a crowd who have clearly missed seeing the lips in action, whilst other classics ’Pompeii AM Gotterdamerung’ which Coyne dedicated to Black Sabbath and ‘The W.A.N.D’ also draw huge cheers as their unmistakably ethereal sound rings out across a delighted crowd. Wearing a flamboyant outfit complete with a pair of pompom-adorned sequin pants that would make Noel Fielding jealous, Coyne did not give a single fuck as he sat astride a plastic neon unicorn to perform ‘There Should Be Unicorns’ (obviously), whilst blasting glitter over the audience with a massive confetti cannon. For me however, the highlight of the show was The Flaming Lips’ sensational tribute to David Bowie, as the room exploded into song during this poignant and emotional moment. Despite performing Bowie classic ‘Space Oddity’ from inside his human-sized hamster-ball whilst surrounded by ostentatious stage-props, the song was beautifully understated and Coyne executed the vocal as well as anyone who dared to cover Bowie could ever expect. 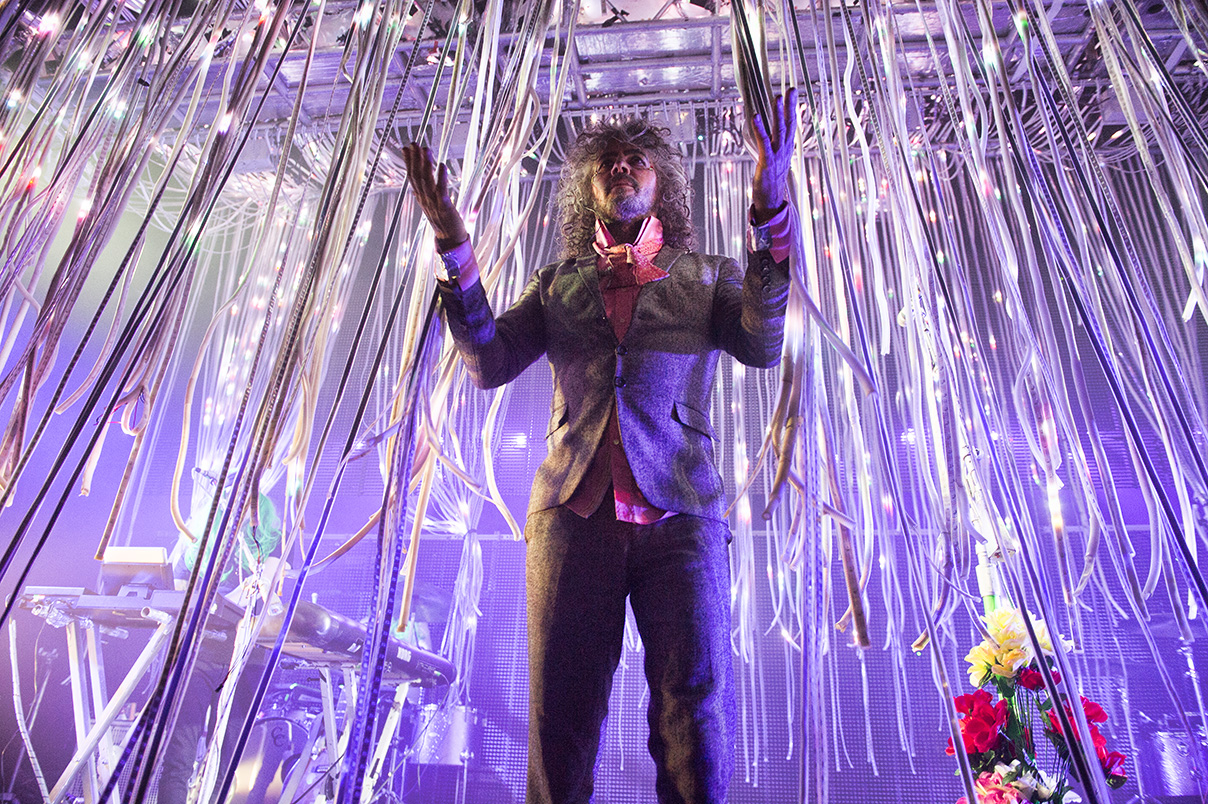 Phenomenal in every sense of the word, The Flaming Lips are not a spectacle to be looked at, but a movement to be experienced, and Wayne Coyne’s space-age carnival was a surreal journey from start to end. Finishing off the evening with arguably their most popular track ‘Do you Realise?’, The Flaming Lips proved once and for all that they are more than just a band, they are an orchestra and their songs are symphonies.The Flaming Lips © Melanie Smith