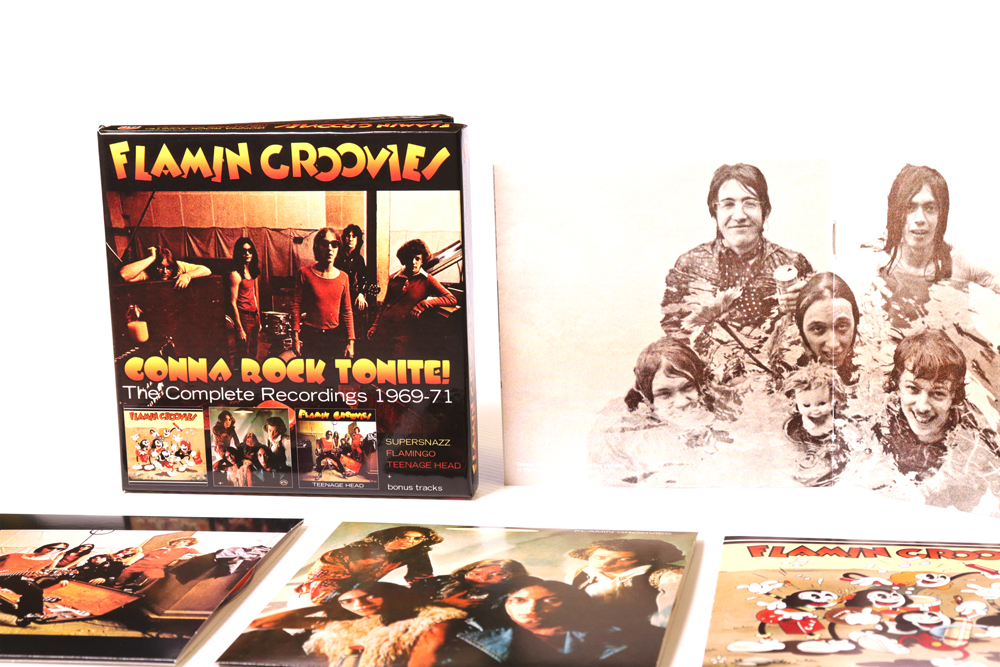 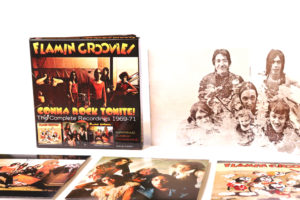 It has been said before that the Flamin’ Groovies were in fact two bands, with the Roy Loney-helmed version being wildly different from the later, Power Pop pioneer edition fronted by Chris Wilson and marshalled by Cyril Jordan. That is true enough. But even over the course of the three LPs by the former incarnation that we have here, they were pulling in wildly different directions before their 60s Pop makeover.

Roy Loney and Tim Lynch were two SF Folkies who were sparked back into Rock action by the British Invasion. Leaving their trad act the Capetown Singers, they started to put together a covers band called The Chosen Few (nothing to do with the pre-Stooges band of the same name). During auditions they recruited drummer Ron Greco (later of Punk band Crime) who recommended his friend and guitarist Cyril Jordan to the fledgling outfit. George Alexander, a old school friend of Loney and Lynch, completed the line up on bass. This aggregation gigged for a year or so, changed their name to the Lost and Found and split up. On the return of Lynch and Jordan from a sojourn in Europe, they reformed with Danny Mihm replacing Greco under the new name the Flamin’ Groovies (a name that belied their love for the Stones and Lovin’ Spoonful).

In 1968 they were playing music that was in the main looked upon as antiquated in the post-Psychedelic age i.e. raw Rock & Roll covers and Lovin’ Spoonful knock offs. Because of this they were ignored by record companies who were on the lookout for the next big thing, so in true Punk DIY style they put their own record out instead, the 10″ EP/mini album Sneakers. This sold so well that the big boys reconsidered and the band was duly signed to Epic for their debut album Supersnazz, which makes up most of the disc one here.

For their first full length effort the Flamin’ Groovies took what they had trialled on Sneakers and attempted to enhance it, spending a vast amount of Epic’s money in the process. Consequently this album is a bit of a rum mix, with comic olde world stylings (including the cartoon sleeve illustration by Bob Zoell), strings and harmony vocals butting heads with rootsy rocking grit. While perhaps not truly representative of the band it still is a good listen and entertaining enough.

Supersnazz was/is a broad canvass and in trying to cover any number of bases the band did occasionally overreach themselves. But you can’t doubt their ambition: they wanted to make the best album ever, which should be the aim of every artist. The Pseudo-James Brown Soul strut of opening track Love Have Mercy begins things nicely and is followed by a fairly straight cover of Little Richard’s The Girl Can’t Help, the only real deviation being some great crashing guitar lines. Laurie Did It previews the Chris Wilson years in a way, Folk Rock that has a bit of the Hollies’ catchy magic about it and a neat Psychedelic coda.

Apart From That is similar, a little like the Beatles around ’65, but Pagan Rachel is more in the style of Harry Nilsson, a piano-led ballad. Immediately they change gear yet again, with a tough version of Eddie Cochran’s Somethin’ Else, the pared down attack on this prefigures the Pistols’ take on it a decade later and this segues appropriately into Pistol Packin’ Mama (recorded by Jerry Lee Lewis among others). The Country influence of Brushfire is something they would come back to on Teenage Head and following track Bam Balam throws in a bit of Jazz, this one also shows the band’s love of Lovin’ Spoonful down-home charm pretty clearly. Closing song Around the Corner finishes things on a high note with dynamic guitar and some fine high vocals.

Despite having some great individual tracks, Supersnazz is still a bit of a head-scratcher to this day. The bonus tracks on this disc are 4 single version of the album tracks Rockin’ Pnuemonia, The First One’s Free, Somthin’ Else and Laurie Did It. For me the best of these is the barnstorming Somethin’ Else, but all three are pretty punchy.

Presumably the general public were as flummoxed by Supersnazz as Epic (who sent the band on their way soon after it was released), with the result of LP selling poorly. Undeterred, the Groovies’ started to promote their own shows at Filmore, which was recently vacated by Bill Graham. One show paired them with Iggy Pop’s Stooges – both they and their big brother band MC5 would have a marked influence on the Flamin’ Groovies next move, with the blitzkrieg hammer of the Detroit duo informing Flamingo. Buddah Records picked up the ball from Epic and put this album out in 1970.

Though Flamingo is even downplayed in the sleeve notes (Jordan reckons it’s the worst Groovies album and Loney is pretty non-committed about it), for me this is their best and most brutal effort. They kept the raw Rock & Roll that had always informed their attack, but now moved more into the future with a marked Proto-Punk edge. The result was a driving mix that only pauses for breath a few times. Sweet Roll Me On Down and Childhood’s End hark back to their Lovin’ Spoonful fanboy days of Supersnazz (Sweet Roll On Down) and lovely late Psych on She’s Falling Apart provide variety. Apart from that it’s heads down for tough rockers like the raw cover of Little Richard’s Keep A Knockin’, the very tuneful Second Cousin and a pounding Road House to finish up.

The best for me though is the pure Proto-Punk magic of Headin’ For The Texas Border, with an irrepressible, dynamic riff and instrumental verve anchoring a rare vocal from Tim Lynch. This as close to Punk as anyone got in 1970. An exciting peach of a track I just wanted to play again and again on first hearing it many years ago and I’ve never tired of it since. But Flamingo is much more than one top track and a bunch of others that make up the numbers, it’s a quality record with plenty of depth and guts.

The only gripe I can muster on this disc is that all the bonus tracks bar one are covers – neat versions, but not adding much to what has already been established i.e. that the FGs could always be relied on to do an old Rock & Roll song justice. Having said that, it is maybe fitting that they do Garage standby Louie Louie and their elongated take on the Pirates Shakin’ All Over is pretty damn electrifying. The sole self-penned extra is the mostly instrumental Going Out (Version 1) which allows the guitarists to show off a bit, but was hardly challenging to go on the album proper.

Flamingo fared well with the critics, but again the Groovies failed to stimulate the record buyers. Buddah kept faith (sorry) and a year later a brand new album entitled Teenage Head arrived. This record found the Groovies in a far more Bluesy mode than the previous LP and was favourably compared to the Rolling Stones’ album of the time, Sticky Fingers. In fact it has been alleged that Jagger and Richards thought it was a better effort too.

They set out as they meant to go on with the tough Blues of High Flyin’ Baby and Have You Seen My Baby is a great piece of street Rock & Roll. The title track is a bona fide classic, a bit like High Flyin’ Baby in that the vocal sails close to Beefheart territory, but it is full of drive and attitude that stamps it out as the Groovies’ own brew. Evil Hearted Ada seasons in a little Rockabilly bop and the following Doctor Boogie sets a handclapping beat to an almost camp and comic vocal. It is left to the superlative brooding slow Rocker Whisky Woman to close out the set, the Stones vibe pretty clear here, but when the quality is this high who cares?

Again the bonus tracks are mainly Rock/Blues covers, with a great Garagey take of Rufus Thomas’ Walkin’ The Dog and a raw and very danceable version of Scratch My Back being standouts. We also get another go at of Somethin’ Else (presumably this was recut around the time of Teenage Head?) and a very cool rendering of Chuck Berry’s Carol, though the FG’s Rumble pales in comparison to Link Wray’s mighty original. Lastly there is another version of Going Out.

However well received it was, Teenage Head did not set the charts aflame and Lynch and Loney left the band, bringing this first phase of the Groovies (and the boxset) to an end. These departures after Teenage Head would ultimately result in the less earthy, slicker 60s-fuelled Flamin’ Groovies in the second half of the 70s. However, it was a more gradual movement than one might think. The early sound of the next stage of the band was documented on the Grease extended plays (not featured here) that were released on the Skydog independent Label in 1973/74. These late 1971 recordings show a band in flux, now fronted by teen sensation Chris Wilson, striving towards Pop, but unafraid to rock harder.

Dog Meat and Slow Death were tough enough to stand next to the earlier line up’s pomp and hard rockin’ covers of Sweet Little Rock ‘N’ Roller and Jumping Jack Flash hark back to their previous two LPs. By 1976 the process was complete though and this new era was heralded by the excellent Shake Some Action single. Alas this metamorphosis was achieved by knocking off their rough edges, but you can’t blame them. The original Groovies had tried an eclectic approach from Supersnazz onwards and it was just too weird for the average Pop fan to grasp, no matter how wonderful.

Although Gonna Rock Tonite! doesn’t having anything particularly rare on it, it is good to have everything the Loney line-up recorded together in one hit. This is a beautifully presented set, with a really informative history of the band (with contributions from Loney and Jordan) in the sleeve note which gives an insight into the competing forces of the Groovies which eventually tore them apart.

While they held it all together though they were absolutely unique – more traditionally based than the Stooges but still capable of Proto-Punk calls to action and spine-tingling Rock & Roll. Through the path they took on these three albums, they blitzed through a myriad of styles with a no-holds-barred enthusiasm that was endearing. Each record has great tunes, variety and rock-solid playing, with Flamingo being my pick, a truly brilliant LP. Some of the Groovies’ greatest grooves are present and correct and all these years on they can still kick up a real ruckus. Do yourself a favour and catch them here when they were Flamin’ Groovy indeed.