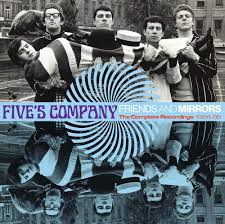 For the first time, the full recorded history of the Chelsea-based five piece, including their three 7″ inchers released at the time, the album “The Ballad Of Fred The Pixie”, early demos and their unreleased fourth single “Friends And Mirrors”, a classic slice of Psych. Ian Canty discovers the band that linked the trendy Kings Road of the Swinging 60s, the early stirrings of Fleetwood Mac and TV quiz show “The Pyramid Game”!

I don’t think it is misleading to say that happenstance may well have played a fair-sized part in furthering the early career of Five’s Company, at least as far as media exposure was concerned. Johnnies-on-the-spot because of their attendance of St Mark and St John’s Teacher Training College right on the Kings Road of Chelsea, they were plunged straight into the midst of the rapidly evolving “Swinging London” scene of the mid 1960s through mainly their proximity to heart of what was considered the centre of the trendy world at the time.

Coming together with a line-up at boasted one-time Animals singer Chris Robson and bassist Bob Brunning of Zoot Money’s Big Roll Band, they, a little unusually, decided to record a demo tape before they had even played a gig. Selections from that tape are presented here and show a band moving towards their own direction from the basis of Blues covers and primitive Beat originals. “Little Egypt” is firmly in the same vein as the Downliners Sect version and “I Ain’t Got You”, recently recorded by the Yardbirds, is not that different from their take. Better though is “Dejection” which has some great vocals and a bit of a Beatles influence; this track was also recorded to better effect on their second demo, along with the strangely old fashioned sounding “We Love Us”.

Tragedy hit the band when Chris Robson succumbed to a heart attack whilst only in his early 20s and this was just before the band had an audition for the (then) prestigious Pye Records. The understandably shaken Five’s Company turned up nine days after their bandmate’s funeral to run through their set. Given these horrid circumstances they were more than surprised to be signed on a singles deal to one of the top UK record labels of the time.

This set them up for a run of three singles which all had their good points and began with the wry, Folk Rock-styled debut “Sunday For Seven Days”. This record kind of resembled what Mouse And The Traps were doing in the US at the same time (like their hit, the “Nuggets” classic “Public Execution”), in that it was like a more garagey Bobby Dylan. The second single was “Some Girls” which had a hint of “Dedicated Follower Of Fashion”, neat social observation. Ten years later a band called Racey had a hit with something not unalike lyrically, well almost exactly the same. Hmm. Despite the usual pirate radio plays neither single made much headway. As a result, cover version was mooted as perhaps the best option to get the band into the charts.

So the last of their released product was a cover of their label’s current darlings the Kinks’ “Session Man”. Five’s Company do an admirable job with this cover but for one reason or another didn’t meet with any commercial success. Pye showed a little patience that was rare in the cut and thrust of 1960s UK Pop and asked for another single and the band duly delivered the Pop-Sike beauty “Friends And Mirrors”. Seemingly perfect for the flowering of the Summer of Love, the record label for reasons best known to themselves decided against the release on hearing and Five’s Company’s association with them was at an end.

After the setback of the record company passing on the option of a fourth single the band split with the members moved on to various ventures. Bob Brunning featured in the first line up of Fleetwood Mac and Edward Broadbridge decamped to Denmark with his new bride. Most odd of these is the case of guitarist Dave Jones, who later became better known as Steve Jones (no, not that one!), Radio One DJ and host of TV’s “Pyramid Game” among other “tea-time” quiz shows. He was discovered after showing up to record a jingle and rather than his guitar playing skills, the producer heard him talking and thought him perfect for the voiceover instead. This launched a long career on TV and he was a familiar face on screens throughout the 80s. His voiceover career is still going on today.

This was far from being the end of the Five’s Company story though. The legendary cheapo record label Saga in 1968 decided that there was money to be made from this new “concept album” gubbins and in the course of pursuing this contacted Bob Brunning, recently replaced by John Mcvie in Fleetwood Mac. He set about recruiting a new line up of Five’s Company, summoning songwriter Broadbridge back to Blighty and also guitarist Colin Jordan to join in as well.

“The Ballad Of Fred The Pixie” isn’t quite an undiscovered jewel in the firmament of Concept LPs, but it is an interesting curio. Some of it does sound a little like a cheaply-assembled radio play with the slightly hammy delivery and lack of instrumentation at times (probably because of the need to record quickly for money-saving purposes, with some personnel not being available at the time meaning some tracks remained drumless for instance). There is a Music Hall/Am Dram feel to things that is a little in the Kinks mode around this time. The band do transcend the rigid structure to deliver some good stuff, a humourous answer song to the Fabs with “Now I’m 64” and the thoughtful throwback to their old sound “The School Boy” being the picks. On the whole it is an engaging enough story and the music does just about support it, despite being rather threadbare on occasion.

The album was delayed for a year before its release for some reason and finally appeared to little fanfare in 1969. It disappeared without trace and that was the end of Five’s Company.

Without a doubt the highlight of this collection are those 1966 singles (and the unreleased fourth one too) which still sparkle – by this time the band had developed no little skill and each one was a polished piece of 60s Pop. On this new compilation, you can trace their development from R ‘n’ B hopefuls, to Psych/Mod Poppers and finally as a reanimated Proto-Prog outfit on the concept album. Though the rest doesn’t quite match the singles they’re all well worth having and the concept LP is charmingly dotty. Therefore, each stop on this Five’s Company Heritage tour has something to divert you.