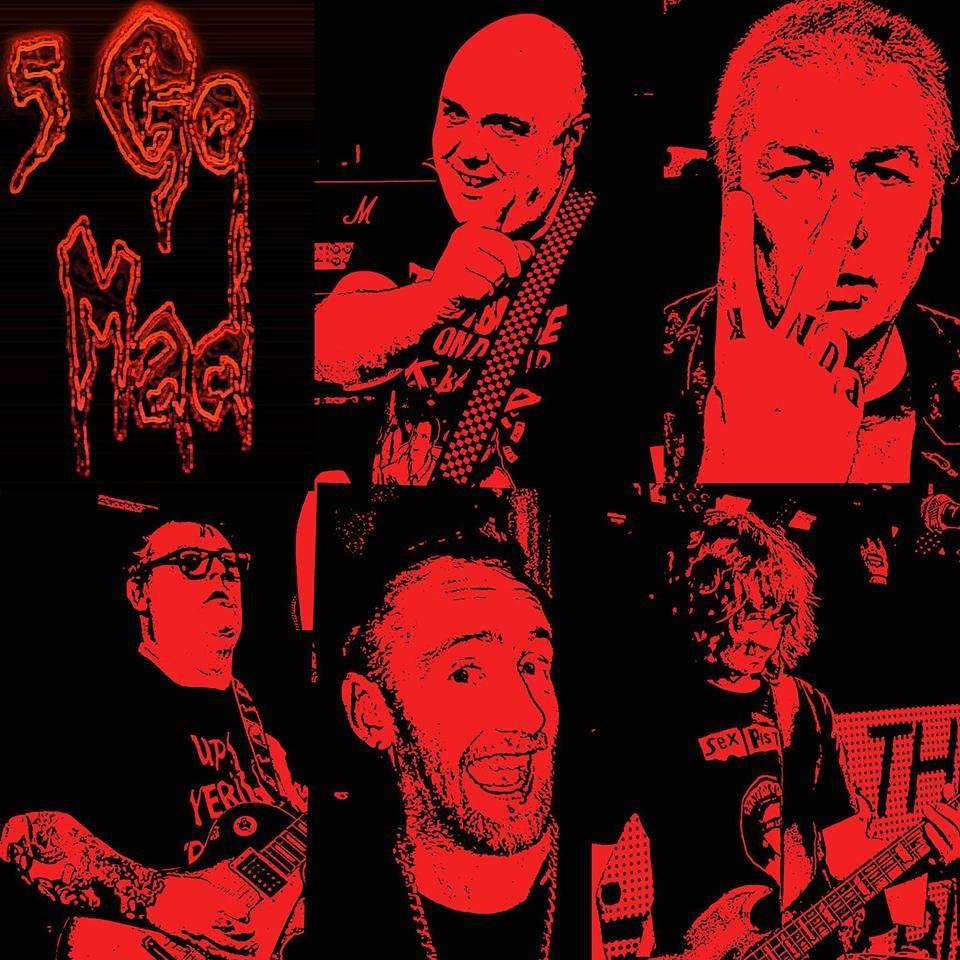 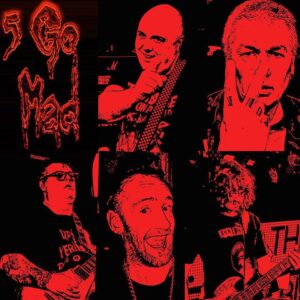 40 years on from ’77, the spirit of Johnny Moped and the Unwanted at the Roxy WC2 is alive and well and residing in Portsmouth… in a Carry On Punk Rock style. Ged Babey, against his better judgement, can’t help but like 5 Go Mad.

5 Go Mad are a hard-gigging, fun-loving, piss-taking bunch from Pompey.  Chances are if you go to a ‘Punk Festival’ or All-dayer this year you will bump into one of them.  They will spill your pint, buy you another and you will end up chatting and after ten minutes you’ll have a friend for life.

5 Go Mad are a caricature punk band in a way; tartan bondage trews, crap mohawks worn with a beard, arse-baring, burping, farting, drinking, wanking lunatics who write jokey songs with rhyme-schemes that the Two Ronnies or Benny Hill would have rejected when writing a punk parody.  Since their debut album, which I reviewed here, they have lost a bass-player, gained a new one, gigged all over supporting many a ‘punk legend’ and improved technically, but not changed at all in essence.

This live recording of a support slot with the Vibrators captures them, unedited in their element. Live, loud and taking the piss yet playing really rather well!  With the background chatter and what sounds like Woody Woodpecker laughing between songs it really does have the same ‘vibe’ as the Roxy WC2 album (which everyone calls Live at the Roxy – the first ever compilation of live UK punk rock on a major label – featuring Buzzcocks, Wire, X-Ray Spex, Slaughter and the Dogs – as well as Eater, the Unwanted and Johnny Moped.)

You could say that 5 Go Mad are Punk Marmite, you either love them or hate them -but I’ve always tried to sit on the fence and be objective… but after a few pints I end up falling into the love’em camp.

This live album has all of the tracks from the ‘Lashings of Ginger Beer’ album plus four brand new, unrecorded in the studio songs -and strangely, they are the ones which come over best;  full of fresh, manic, immediacy in pure punk tradition.

Syd Mankini is a new song which is about their number one fan, who loves the band so much he actually moved down-South to be nearer to his (…I was gonna say) heroes (but actually they’re just ‘mates’ now), Last I heard he was living in the cupboard under the stairs at singer Alan’s house.

Shit Town Rat seems to concern Saint Bob Geldoff and the time he slagged off the audience at Rebellion. Friend of the Stars  is about punk bores and name-droppers and PMQ’s is a savage critique of Prime Ministers Question Time.

The between-song inter-action between band-members is what makes this is a lively, fun, foul-mouthed and juvenile delight.  A portable gig on a silver disc  which is guaranteed to put a smile on your face.  Musically it stands up as a race-to-finish-first, punk-as-fuck, UK82, Gob-On-You, Punk and Disorderly, lo-fi racket, which yer-average Rebellion-goer will love.

After decades of dissection, intellectualizing, analysis and revisionism, sometimes it is a good idea to bring ‘punk’ back to the basics of having a laugh and making a noise for the sheer hell of it.  5 Go Mad, living up to their name, certainly do that – with knobs on!  And ‘boobies’.

the band also appear alongside SLF, the Defects, the Upstarts and others on the Top Of The Punks charity compilation – raising funds and awareness for MIND which comes out in June 2017.