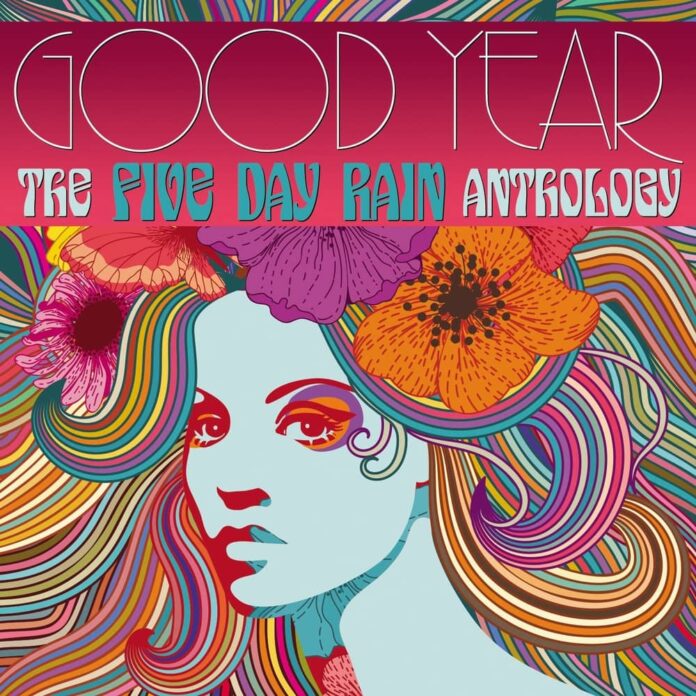 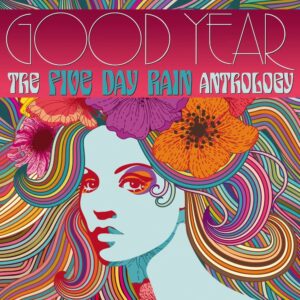 2CD set which brings together the recorded work of psychedelic band Five Day Rain, including the two versions of their 1970 test pressing only album, which is now a highly prized rarity. Also featured are several previously unissued items and the single the band made in 1971 under the Studd Pump name. Ian Canty checks the weather forecast…

When it comes to the obscure, few could match up to the psychedelic act Five Day Rain. Reading through the sleeve notes of this set, it seems they barely existed even back in 1970 when they were active, lasting under the name for less than 12 months and only appearing on stage during that time under a different guise. The band cut two versions of a white label album, but after neither aroused the record company interest that was required, they were finished before anything of theirs had been officially released. They then briefly re-emerged soon afterwards under the cumbersome Studd Pump moniker for a single on the Penny Farthing label and Five Day Rain tracks have been reworked and issued at various points over the years.

Five Day Rain’s story starts when Sussex-based three-piece Iron Prophet teamed up with keyboardist Graham Maitland after they attracted his interest with a good showing in a battle of the bands competition. Graham had previously been a member of Glasgow beat band The Scots Of St James and psychedelic contenders Fleur De Lys. Iron Prophet, made up of singer/guitarist Rick Sharpe and a rhythm section of Chris Sheppard on bass and drummer Dick Hawkes, had for their part gained a decent live reputation supporting a few “name” artists locally, like Arthur Brown and Genesis.

A friend put them in contact with Brian Carroll and Damon Lyon-Shaw, a pair employed by the IBC studio in Portland Place, London. Discussions led to the decision that an Iron Prophet album could be recorded at the studio during any time when it was not actively being used by someone else. In this arrangement, the band would perform under the name Five Day Rain and session musos were brought in, with Dick Hawkes not playing on the record at all. A 10 track test pressing was made with Lyon-Shaw in the producer’s chair and Carroll tried to raise record company interest with it. No offers were forthcoming, so the LP was rejigged with four numbers being dropped in favour of the band’s newer material. Again this revised recording made no waves and by January 1971 the Five Day Rain project was over.

But that was not the end of the story. Maitland, Sharpe And Shepherd reconvened later in 1971 with drummer Gareth Roberts as Studd Pump. They managed to gain the interest of Larry Page “The Teenage Rage” and his Penny Farthing label. Trumping Five Day Rain, they actually had a single released during their existence in Spare The Children/Floating. Unfortunately, it was met with indifference, meaning they split soon after the disc stiffed. A few years later, in 1977, Rick Sharpe opted to re-record a couple of Five Day Rain numbers and a year later Lyon-Shaw and Carroll used their remixes of Five Day Rain tracks to pad out the Time Is Right album on the infamous cash-in label President, released under the name One Way Ticket.

In 1993 the second version of the test pressing LP was issued by Background with some amendments and there was a 2005 Italian issue of some Five Day Rain backing tracks that Rick Sharpe had reworked. These recuts are all present and what we have here is the most definitive Five Day Rain collection yet, so let us have a listen.

The second version of the amended 1990s version of the test pressing album starts Good Year, with a warm, summer pop treatment of Bob Dylan’s Too Much Of Nothing the first item on the agenda. It’s a good enough opener. But perhaps it doesn’t really give an accurate first impression of the erstwhile Iron Prophet, a band that could emit some raw power. This tune features slower sections and also accordion strongly, the latter of which was certainly would have been a bit of an oddity on the progressive scene.

The tough framework of Leave It At That opens up the opportunity for the kind of guitar explorations that wouldn’t have seemed out of place on a 1966 freakbeat number. This may have appeared pretty dated back in 1970, but I can attest to its positive impact listening to it in 2022 and Good Year itself, which comes next, has a nicely carefree folk/pop arrangement. Reason Why again stresses the accessibility of Five Day Rain, with the piano-led drive of Fallout ending the first side of the original recording.

Side two commenced with some good fuzz guitar and organ on Marie’s A Woman, despite the song’s lyrics being a bit awkward. Keyboards feature prominently on Don’t Be Misled, which also has some neat guitar jabs too, but Sea Song is much more in an almost middle of the road pop style that to me is less enjoyable. Rough Cut Marmalade slowly fades in with what sounds like some early synth drones, before a freaky rock beat takes over on what is a lengthy, fast-moving instrumental cut and definitely the most progressive tune here. The final offering Lay Me Down is practically a brief cameo of soaring harmony vocals.

The three bonus items on this disc are the original 1970 mixes of Leave It At That and Marie’s A Woman, plus an edit of Too Much Of Nothing. The 1970 mixes are perfectly good, slightly tougher takes and Too Much Of Nothing is succinct and attractive. The LP itself may not have quite been a classic, but it has its moments. With a bit of work, less of the MOR trimming from the session men and more of the actual group plus some luck, Five Day Rain may have had a promising future.

The second disc of this set ensues with the four numbers that were dropped from the running order when the Five Day Rain white-label LP was rejigged. Wanna Make Love To You has the just kind of heavy boogie rock format that was de rigueur at the time and it practically bumps into the percussive hammer of a snappy So Don’t Worry. Dartboard hits all the right notes as a moody pounder of an instrumental and Miss Elizabeth is a nicely fuzzed-up stop-start blues-rocker, even though lyrics could have done with a bit more work. Certainly, these four tracks are harder-edged than most of the album on disc one and their inclusion would have lessened the pop appeal, but brought up the quality level. Personally, I can’t help thinking that having listened to the first test pressing in its original running order, it would have been the better option.

Another version of Lay Me Down comes next. Then we have a rocked-up version of the Bobby Hebb jazz song Sunny, which made an appearance on acetate as part of an EP. This is fairly well despatched, if inessential, and it is followed by an edited version of the Rough Cut Marmalade jam. We then come to both sides of Studd Pump’s 1971 single. Spare The Children is reasonably good, with a drum-heavy sound that would seem ready for the glam which was about to ascend in UK pop. Of course, it did nothing commercially and as the sleeve note correctly observes, it was a rubbish name for a group. Rick Sharpe’s 1977 reflective recut of Reason Why is lovely and the more upbeat Fall Out (now with a space between fall and out) is pretty good too.

Then we have the four Five Day Rain backing tracks Sharpe updated in 2005. Instrumental Antonia thrives with lots of guitar, a real tribute to Iron Prophet’s power-trio roots, and So Don’t Worry makes the most of some flowing piano work, ending oddly with “I Do Like To Be Beside The Seaside”. The Boy is another primal piece of rough-shod rock and a new version of Wanna Make Love To You completes the quintet. The final set of three are from the Time Is Right One Way Ticket LP. Reason Why still sounds like the vocal was recorded underwater, but it isn’t too bad and Outroduction (actually a re-titled Lay Me Down) brings down the curtain.

Five Day Rain may have been a short-lived aggregation, but they had some good attributes and ideas. If the band’s pure rock hammer, something which was right in tune with the times, had been given more of a chance, who knows? This aspect of the outfit is well depicted by the four numbers from the first test pressing that were dispensed with later. The second test pressing is far more pop-inclined, but still quite attractive for the most part. On this set, a few of the later mixes/efforts are a bit dodgy, but there is enough on Good Year to speculate that they could have gone on to do some interesting things if the crucial record company support had been found. It wasn’t, but at least we finally can enjoy what both sides of what Five Day Rain had to offer all these years on.