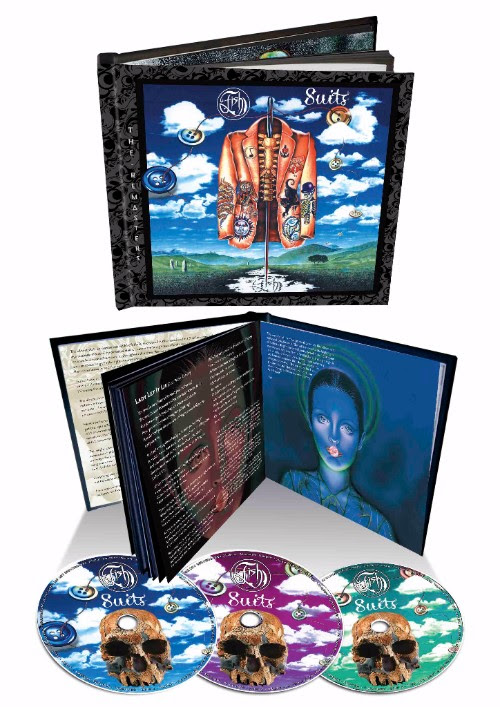 Suits / Songs From The Mirror

Two more hardbound deluxe remasters as Fish (out of Marillion, as he was immortalised in Viz comic –  a sure sign that you’ve made it) continues to work his way through his back catalogue providing not only  revitalised originals but a treasure trove of audio visual goodies from the archive housed in classy packages.

The 1994 album Suits and 1993’s Song From The Mirror both come in hardbacked 3 disc packages with copious sleeve notes, illustrations and photos from long time artistic collaborator Mark Wilkinson. Along with the earlier reissues of his more recent material, they are forming  quite an impressive little line along the shelves, cataloguing almost thirty years work as a solo artist.

At the time, Suits was a none too subtle jibe at the music business that reflected a certain disillusionment following the experience of being dropped by a major label and striking out on his own by forming the short lived but essential part of the learning curve, Dick Bros Records. A typical business rollercoaster of journey with as many highs as lows which is explained in some depth in the essay from Fish with significant contributions from producer/collaborator James Cassidy. Never one to hold back his feelings, the energy is channelled into set of songs that may not be his strongest album yet contains some powerful and at times typically vitriolic observations. A fledgling first ‘real’ solo album that set Fish off along a long and winding road that was, as Blackadder would say, strewn with cowpats from the Devil’s own satanic herd.

The variety on Suits runs from the delicate acoustic tumble of Fortunes Of War matched by the laid back feel AOR feel of Lady Let It Lie to the little bit funky, Somebody Special. There’s usually one (at least) killer track per Fish album, with Suits yielding Raw Meat as a piece that’s as aggressive and as passionate as it gets, which for Fish is quite an accolade. Looking back over twenty five years later following the release of some of his strongest ever material, it’s gratifying to hear Fish resolutely declaring how “I’ll always have the strength to carry on”

There’s also the wandering Black Canal that snakes ominously, driven by a spoken word discourse that Fish regularly makes a feature of his work; a seedy and detailed walk along the perimeter of darkness of a world that’s totally fugazi. A precursor and template for  the more fully realised dangerous vibe of Sunsets On Empire’s homage to the fairground, ‘the shows’, on Jungle Ride.

A disc of demos, not always the thing for everyone although dedicated fans (and there are plenty) will enjoy dissecting the journey to the finished article; the three versions of Somebody Special which gather pace over a year being prime examples. It’s the third disc that contains live performances of material from the album is where some tracks come into their own. A musician who’s been very generous with live offerings during his solo careers, these are collected from various sources, the mid nineties and beyond, from Norwich to Lucerne to Poland and a clutch from his hometown in Haddington where the Fish convention gatherings and gig at the local St Mary’s church are primed for some intimate performances.

The pick again may well be a stripped back Raw Meat from Poznan in more recent times. The message still bold and clear, a sparse backing from Foss Paterson and Frank Usher, yet possibly more subdued, with maybe a sign of resignation, acceptance or simply sung with experience of hindsight.

With so much care and attention to detail to provide a seriously high quality product, a shame that the disc 3 tracklisting on the back cover is incorrect, just relisting part of the second disc list. Small point but knowing Fish, you can see him spitting blood…….

You can watch the video for Fortunes Of War from Suits here:

Songs From The Mirror from 1993 was always going to be an interesting departure. Allegedly influenced by Bowie’s Pin Ups with the title self explanatory, this was the covers album that despite the lack of interest at record company level, gave an insight into the Fish psyche and influences. 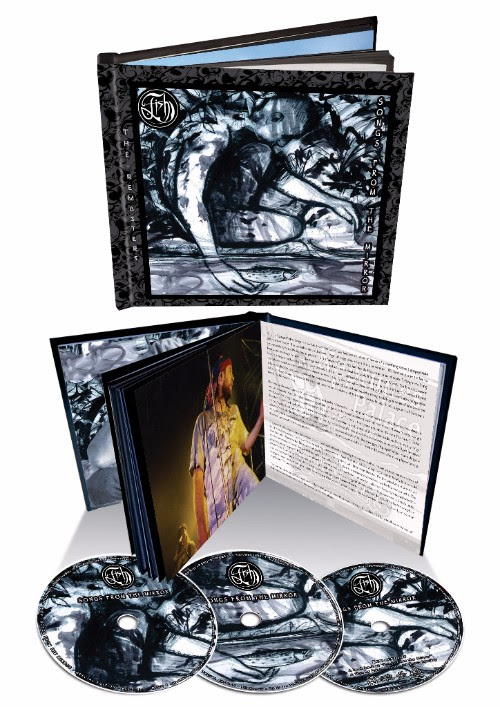 It’s a reasonably predictable collection with no major shocks or surprises as to the musical influences of a man whose name was made in a band that was unashamedly progressive rock orientated.

Anyone with a basic seventies rock knowledge will recognise songs from Pink Floyd, The Moody Blues, T.Rex, Argent and The Who together with Yes’ Time And A Word that features a contribution and nod of acknowledgement from Steve Howe. No pressure to deliver on that one then.  Which he does, as he does on all that precedes and follows, yet there had probably been a few years  of practice in front of the mirror… There’s no sense of trying to emulate Gabriel, Bolan, Bowie or Ray Davies either, simply adding his own inimitable and by now, recognisable tag to the well known melodies and arrangements.

The only slightly wavering curve ball is Sandy Denny’s Solo; the only female voice in the selection although the line about the grass being greener maybe in hindsight lacks personal conviction given his experiences with the industry at the time.

A second disc of demos and live recordings. Faithful live reproductions of the faithful album reproductions. Some might argue the value  yet it’s always fascinating when a major artist delves into his influences to come up with his(or her) own versions. A highlight? You can’t go far wrong with Boston Tea Party done with the Sensational Alex Harvey Band in 1995, matched with their Faithhealer that subsequently appeared on Raingods With Zippos.

The third disc is a DVD that contains Reflections; offering something slightly different with a lengthy interview in which where Fish looks back and talks over his selections on another impressive and essentially definitive little set that rounds up the Songs From The Mirror period as we head towards the earlier part of the Fish solo library.

You can listen to the Fish recording of The Seeker from Songs From The Mirror here: