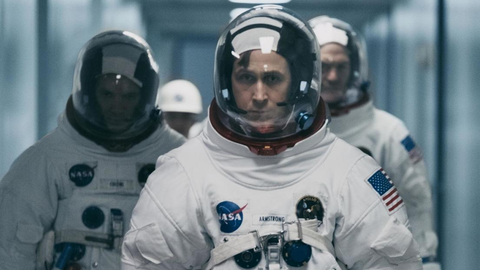 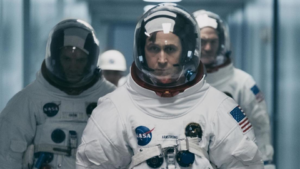 At Home, Manchester and on general release now.

Critics of digitally dominated culture advance the argument that copy and paste kills innovation.  Instead of developing, cultural practises regurgitate and repeat variations on themes pioneered long ago.  There may be recycling, a shifting through the permutations, but evolution is arrested.  In documentaries and in fiction of recent times, there have been many landmark films in terms of critical reception and box office success involving endings already well known by the audience.  Whether it’s Senna or the Star Wars prequels, Titanic or I, Tonya, we know the substance of the narrative arc and the quality is sought in the telling of the tale.  Documentary and fictional narrative constitute a continuum, rather than polar opposites, this is no secret and no revelation.  With this in mind, can there be anything more to say about the moon landings?  How can drama be sustained in a fictional re-telling of one of the most famous events in history?

The key moment in First Man is when the Saturn V rocket fragments into separate parts as it exits the Earth’s atmosphere and the command module, replete with astronauts and the Eagle journey towards the orbit of the moon.  The detachment, viewed from the rear of the command module and also from a god’s eye view somewhere beyond the curve of the Earth, is real and physical.  Its silence only lends weight and heft to the structure, enormous in scale, as the expected sounds are not heard in space and so our minds compensate by intuiting them.  We see the rear of the rocket and its connecting loop banking back towards Earth while Armstrong, Aldrin and Collins journey on.

When the Saturn V rocket fragments it is the apex of the narrative, hanging over the blue planet, as Armstrong (Ryan Gosling) continues his personal, lurching re-calibration.  Throughout the build up to the Apollo 11 mission, we see him detaching from his family, from the death of his daughter and the raising of his son.  We see his detachment from his wife and his detachment from the unsurprisingly grisly fate of so many of his colleagues around him.  At press conferences and rooms packed with senators, the great and the good, we see him detaching from the politics and how it plays to the voters, to the tax payers funding this hubristic project.

All of these things, rather than being exceptional – seem to typify the first man, the American man, man in so many ways – detachment from oneself and one’s feelings and true nature.  Janet Shearon (Claire Foy) tries to communicate with the man but he’s not there, his Earth bound body remains, but his mind is elsewhere.  Half a century later, the story of the First Man resonates in unexpected ways at a time when concepts of masculine identity and power are finally being challenged.

Everything around Armstrong seems to lurch and fragment like parts of a spacecraft careering out of control. The globe spins unstoppably and while he has the god’s eye view that few others have shared, his detachment from the gyroscope is cool and complete.  He paces, not frantically, but deliberately about the claustrophobic confines of his house, the humdrum mundanity accentuated to cast the drama and exhilaration of the space mission into even more brilliant, white light.

In Chazelle’s telling of the tale, minute attention to detail is at the forefront, convincing us, overpowering us with its authenticity, bamboozling the viewer with impenetrable vocabulary of engineering and astrophysics.  Ultimately, although this serves a clear purpose in terms of verisimilitude, like Gosling’s Armstrong himself, emotional engagement is constricted. When Armstrong ejects from the seat of a spinning Eagle prototype, his parachute dragging him through scrubland and smoking wreckage, the grass was in my mouth, the acrid fumes clogged my airways and the pale crescent of moon appearing in the blue morning sky beyond his blackened visor was every goal that was ever too far yet tantalisingly close.  Like Jane, I wanted to feel more of this.

As a character study of a mind-set, the First Man is not just Armstrong, as detached and detaching as he is presented.  The First Man is a collective noun, a synecdoche for the male dominated politics of inter-continental conflict, one-upmanship ad infinitum and to hell with the consequences, the usual collateral of human lives, directly and indirectly.  In my heart, I cannot deny the hope that the one small step will one day become, in some way, just the first step… a vantage point like no other from which we will look back on that breed of masculinity consigned to history as not the First but the Last Man.