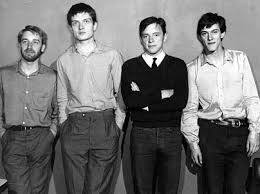 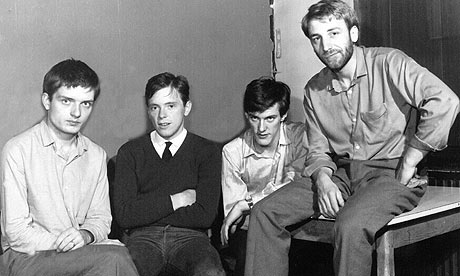 These are the first ever posed shot of Joy Division taken in April 1980 by the late legendary Manchester photographer Harry Goodwin.

There are three known band shots from this session and there are also individual pics of Barney, Hooky and Steve Morris in the ‘Retro’ booklet, although it looks like anything else may have been lost when some of Harry Goodwin’s archives were stolen in a burglary.

Pictures from this session appeared on the cover of the ‘History in Cuttings’ book, the booklet for New Orders ‘Retro’ boxset, and more recently the ‘Maximum JD’ semi-legit interview cd’. Where the photos were taken has been lost in the mists of time. The band look more relaxed than in other later shots- it could be post gig or maybe post rehearsal?

Goodwin was known as Mr Top of the Pops because he photographed everyone that went through the TV studios when Top Of The Pops was filmed in Manchester in the sixties. His archive of photos are arguably the greatest ever in the UK – not only for the sheer volume but also the sheer quality. Somehow, though, he seems to have slipped through the cracks of history, maybe due to his modesty.

Goodwin was born in 1924, in Fallowfield, South Manchester and grew up in Chorlton. His initial photography experience was during the war where he would load cameras for reconnaissance planes flying over Japanese Territory in Burma.He originally worked for the Daily Mirror. In 1963 he went to work for the BBC, where from 1964 – 1973 he was given the mantle of official TOTP photographer and was hired to provide shots of non-appearing artists, and also to provide backdrops for the chart run-down, the Top Of The Pops annual and general publicity for the show.

He had first photographed the Beatles when they played Manchester Apollo in 1963 when he was still working for the Daily Mirror and always had great access to the band who liked working with him.

He had great access and photographed every single act that appeared on the show in the 9 years he worked there, apart from Elvis Presley and Frank Sinatra. He was known for his tenacity and would make sure that he would get the shot.  When Top Of The Pops moved from Manchester’s Dickenson Road studios in 1967 to the London BBC Lime Grove Studios in mid-1967 he went with it and he would continue in his role as the show’s photographer until 1973.

From 1973 onwards, Harry Goodwin concentrated on Sport and became mainly a football photographer, although his favorite sport was Boxing, he took shots of all the star players from Best to Beckham.

Perhaps the Joy Division session was a temporary return to photographing bands and maybe instigated by Tony Wilson who must have known of the cultural power of using a great local photographer with that kind of history to picture a fast rising Manchester band.